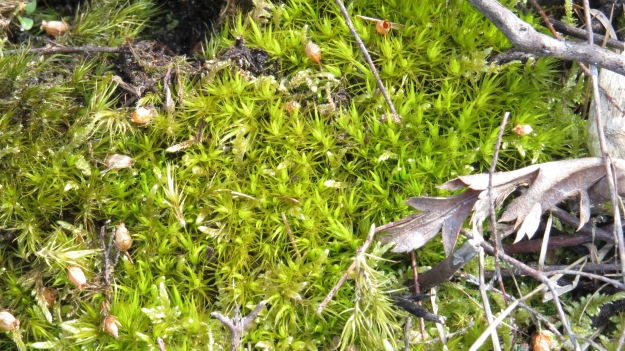 Mosses are all around us.They form a green grid between the paving slabs, slather the bark of trees, pop up in our lawns and yet they are either barely noticed or considered a nuisance.  However, moss is invaluable, for many reasons. It is one of the first plants to colonise bare land following a natural disaster, and helps to hold the scanty soil together in places where it would otherwise just be washed away. It holds water and nutrients, and provides an ecosystem for the small creatures that bigger animals feed on – springtails, tardigrades and all kinds of other invertebrates. 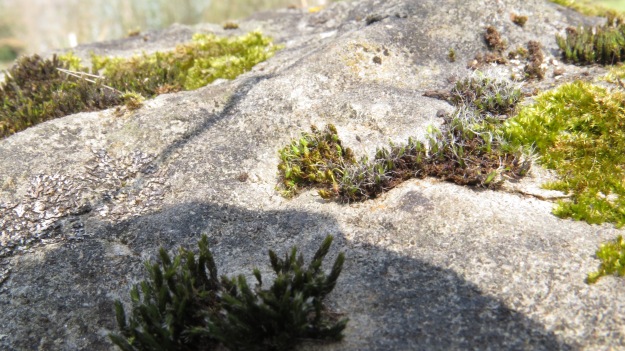 Moss grows in inhospitable places where other plants would struggle to gain a foothold. All they need is a little water now and again. Note how the mosses here are growing in the concavities in the rock.

Last week, I went to a talk given by Fred Murphy, a moss expert at the Natural History Museum. We went out into the Wildlife Garden, which contains all manner of habitats in a tiny space. He explained to us that mosses (and liverworts) are collectively known as Bryophytes. They are different from other plants because they don’t have mechanisms for transporting water and nutrients around (the xylem and phloem that I remembered from my O Level Biology classes), and they don’t have true roots, so they have to live in environments that are damp for at least some of the time. Hence, the mosses in your lawn probably indicate poor drainage.  They also don’t have flowers or seeds: instead they have spores. But although they are sometimes described as ‘primitive’  they have been around in this form for a very long time, probably at least 470 million years, and have been remarkably successful.

The UK is a moss ‘hot spot’. It has over 1100 species, 8% of all the mosses in the world, which is not bad for such a tiny country. On the other hand, our flowering plants are a rather pathetic bunch compared with those in similar habitats in continental Europe – we have only 8% of the plants that they do. Why is this? Fred explained that the last Ice Age had killed off a lot of our flora, scouring it from the face of the land. The mosses, though, were much tougher, and the damp, cold conditions suited them. Although superficially similar, all you need to identify 700 out of the 1100 species is a simple x10 hand lens. Plus, you are never really alone when you’re a moss-spotter because they pop up everywhere.

Everywhere, that is, except where there is a lot of atmospheric pollution. The Wildlife Garden at the Natural History Museum is right next to Cromwell Road, one of the main routes out of London and into the West Country. It is used by a lot of buses and taxis, all of them belching out diesel fumes and particulates. Furthermore, there are several sets of traffic lights, and starting and stopping a vehicle causes a burst of pollution. Because of this, many of the mosses that grow in St Pancras and Islington Cemetery, where I took many of these pictures, would not survive. The absence of certain species of mosses is an indicator that the air quality is not good for anything that breathes it. 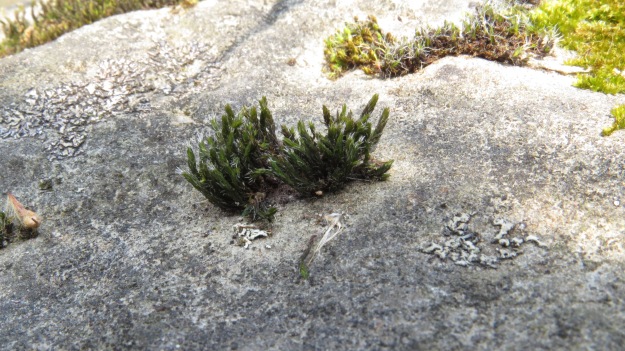 Acrocarp mosses look like tiny trees, and are upright in habit

There are two main kinds of moss. Some, like the one above, are called Acrocarps – they look like tiny upright tufty trees, and are slightly more ‘primitive’ than the creeping, sprawling Pleurocarps like the one below.

All mosses need water in order to reproduce. They produce both sperm and eggs, and the sperm needs to swim across the mat of moss (the leafy bit is known as the Gametophyte) in order to reach the female parts of the plant. Once there, a capsule is produced (the Sporophyte), and it is these that we sometime see rising like the heads of a dinosaur from the green sea of the moss. 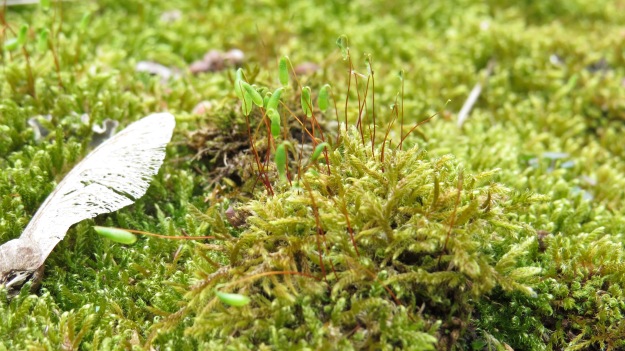 The capsules are sealed tight with little rows of teeth, which are sensitive to the weather conditions, and which will open, sometimes explosively, when the spore inside the capsule is ripe. In some mosses, the spore is catapulted up to eight inches away from the plant, a phenomenal distance when you consider how tiny the plant is. 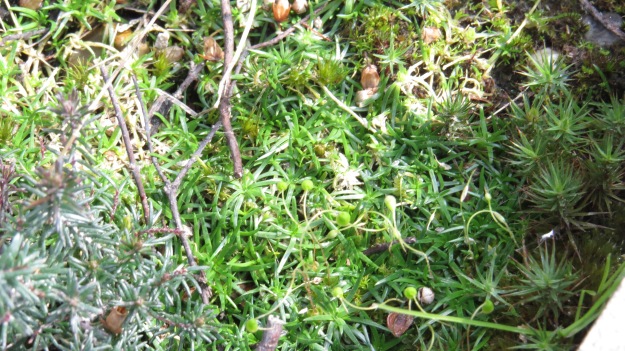 Moss has a number of uses for human beings, as well as for the environment. It is a major component of peat, which as we know is used for fuel, for compost and in the whisky industry. It is used in floristry, where its ability to absorb up to twenty times its weight in water makes it a useful medium for keeping cut flowers fresh. However, Fred did mention that sometimes great boulders of moss are simply taken from Beech woods, where sometimes they have taken hundreds of years to grow. I am reminded of Theodore Roethke’s poem.

To loosen with all ten fingers held wide and limber
And lift up a patch, dark-green, the kind for lining cemetery baskets,
Thick and cushiony, like an old-fashioned doormat,
The crumbling small hollow sticks on the underside mixed with roots,
And wintergreen berries and leaves still stuck to the top, —
That was moss-gathering.
But something always went out of me when I dug loose those carpets
Of green, or plunged to my elbows in the spongy yellowish moss of the marshes:
And afterwards I always felt mean, jogging back over the logging road,
As if I had broken the natural order of things in that swampland;
Disturbed some rhythm, old and of vast importance,
By pulling off flesh from the living planet;
As if I had commited, against the whole scheme of life, a desecration.

Moss was used as a first-aid dressing for the wounds of soldiers during the First World War, where it was considered to be more hygienic than many of the bandages that were available. It has also been used traditionally for bedding, for nappies and for menstruation, and for insulation, both in the walls of longhouses and inside clothing – Otzi, the Iceman found in the Alps who was estimated to have died 3300 years ago, had moss-lined boots.

In the rural UK, Fontinalis antipyretica, which grows in rivers and absorbs a lot of water, was used to put out fires (‘antipyretica’ means ‘against fire’)

Looked at closely, moss seems to me to be a world in miniature, a little forest of fronds where ferocious spiders and mites prowl, where capsules erupt and raindrops are held like little ponds. It truly is one of the unnoticed things that holds the world together.

5 thoughts on “The Skin of the Earth”