Dear Readers, this week I paid a visit to the Barbican Centre to see Shakespeare’s Cymbeline, and while I was there I thought I would pay attention to how this masterpiece of Brutalist architecture works for wildlife. You might think that the concrete and towers would be inimical to life of any kind, but a lot of work has been done to make it more appealing for humans and animals. In the photo above, you can see how the expanses of water have been softened by the addition of reedbeds, and in my dreams I imagine spotting some bearded tits passing through (no, this is not an unkind reference to hirsute young men) or a heron standing quietly, waiting to catch one of the truly enormous fish who sometimes surface with a disconcerting splash. There are also some sunken gardens, which are inaccessible to mere visitors but which look rather intriguing (you can see them to the left of the lake). 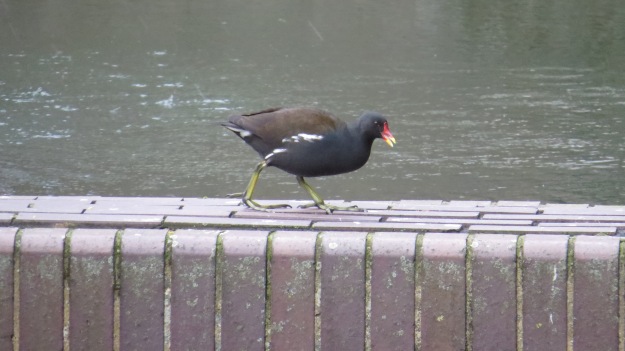 A number of waterbirds appreciate the habitat. There are dozens of moorhens and coots, and a fine assembly of mallards nibbling at the algae on the stonework, and exploring the leaves that have fallen onto the water. 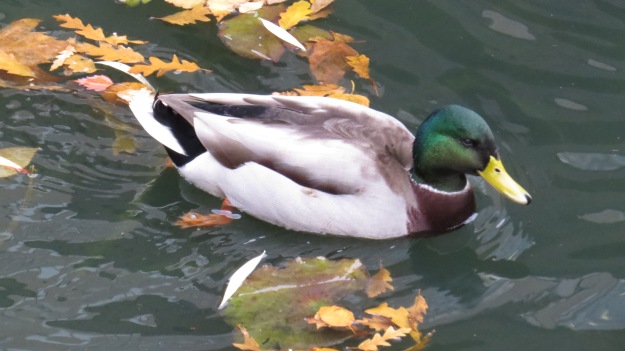 One of the surprising things about the Barbican is the way that it wraps around some of the much older buildings of the City of London. It flows around St Giles Church, for example, which was rebuilt after being badly damaged in the Blitz. The church is partnered by a fine weeping willow and what I think is a silver birch.

Pigeons normally roost on the old Roman walls and the actual Barbican gatehouse, but today there was a keep fit class going on, with athletic businessmen running around in circles and using the benches to strengthen their thigh muscles. I considered taking a photo of them for your delectation, but it hardly seems fair to capture people at their most sweaty and dishevelled. I certainly wouldn’t like it myself. Plus, I’m not sure that taking photographs of people without their permission is entirely ethical, especially if you intend to share those photos with a wider audience. But, I know that I might be rather old-fashioned in my view about this, and as usual I digress.  Onwards! 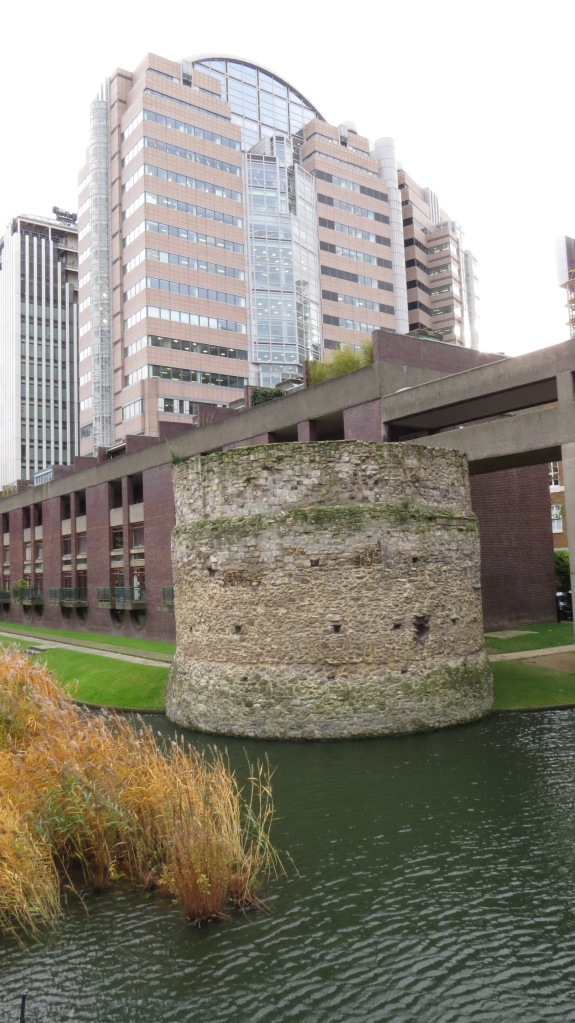 The moments ticked by before the 1.30 performance of my play, and so I crossed to the other side of the lake. It was a chill day, and so there weren’t many people eating outside, but those who were were very popular with the usual suspects. 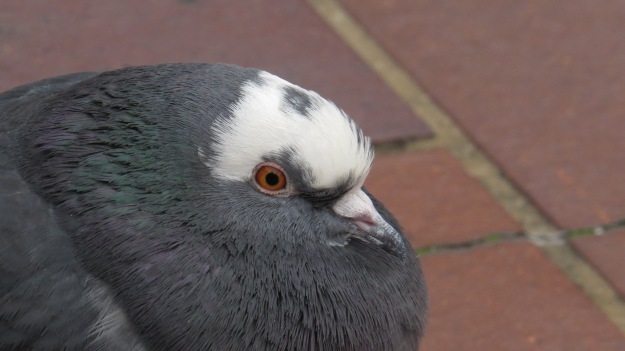 And so, with some reluctance, I headed into see the play. I settled down to watch the ramifications of ancient Britons and their problems with Rome, and winced at the casual misogyny of some of the characters. I eventually got my head around the sex-change of Cymbeline into a woman. I enjoyed the performances and the music. And yet, I was increasingly restless.

Do you ever get the feeling that you should be somewhere else?

At the interval, I decided to go and have a look at the flowerbeds which had been planted up for pollinators last year. I wondered how they looked now that winter was here, and I could easily get back in time for the second half. 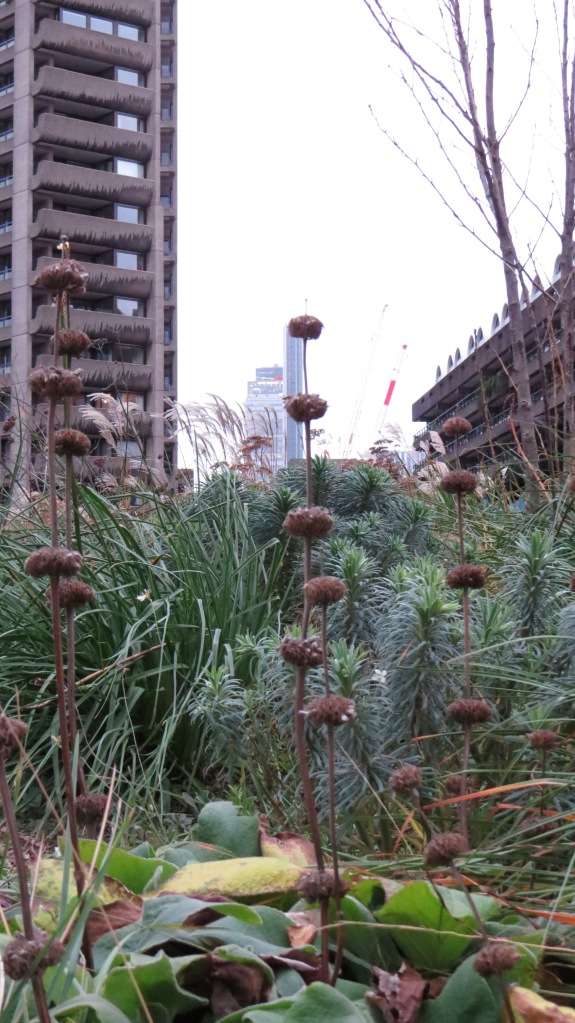 And here, for your delectation, is a view of the grasses dancing.

I checked my watch. Five minutes to get back for the second half! And then I noticed something. In a flurry of sulphur and ashes a small bird arrived by the pond under one of the buildings. It seemed full of urgency, and I was worried that it had hurt one of its feet, although this didn’t interfere with its bounding flight. And all the time that long tail wagged. The name ‘grey wagtail’ doesn’t begin to describe the brightness of this bird, even in the fading light. 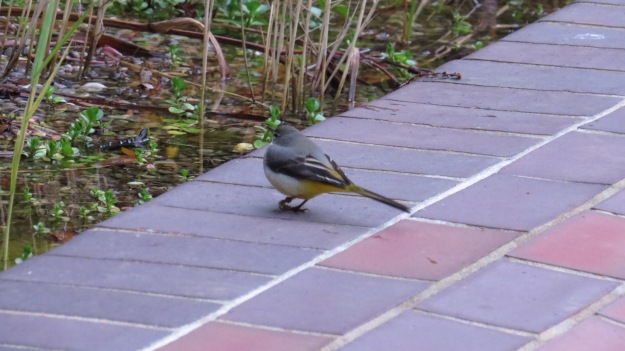 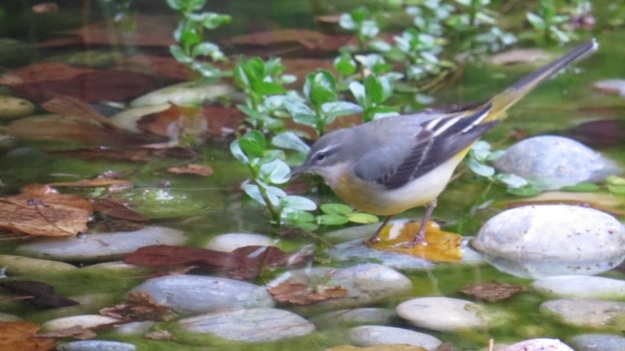 In the breeding season the grey wagtail is found by fast-running water, but in winter it can be found alongside any kind of stream or pond. It struck me that, in creating a variety of habitats including this shallow lagoon under one of the buildings, the Barbican gardeners had made a beacon to call in all kinds of animals. Who knows how useful this tiny man-made spot might be to this bird?

Well, that was the second half of Cymbeline done for. How could I leave while this bird was here? 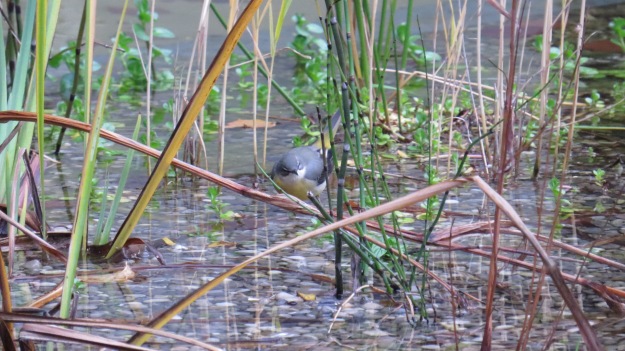 The City of London has very little green space, and so the churchyards and gardens and planted areas take on an even greater significance. As places for creatures to rest, and to feed, they can save lives. In fact, wintering grey wagtails often return to the same spot year after year and so this pond takes on an even greater significance. I have applauded the transformation of the Barbican gardens before, and I do so again here. And it gives me inspiration. With winter coming on, who knows what difference a water feature, or a berry-bearing tree, or some early-flowering plants might make to some weary migrating bird, or emerging queen bumblebee?

And, to end, here is a tiny film of the grey wagtail that I managed to take. Apologies for the wobbliness and the brevity, but I hope it gives you a small taste of what I saw amidst the grey concrete and the windy walkways of the Barbican. If we provide for wildlife, it will come.

All photos copyright Vivienne Palmer. Free to use and share, but please attribute and link back to the blog, thank you!

8 thoughts on “Bugwoman on Location – At the Barbican”