Dear Readers, when I wandered past my local retirement home last week I was stopped in my tracks by this magnificent succulent, which was poking its face through the fence. I am often impressed by what the residents grow in their small, west-facing gardens – one lady is growing potatoes in a bucket, while someone else is specialising in pelargoniums. This plant, however, is endemic to the floral biodiversity hotspot that is the Canary Islands – of 1600 species of plant, 680 are found naturally nowhere else in the world.  On the volcanic soils of its homeland (where it is known as the Bejeque),  the Aeonium develops into a ‘sub-shrub’, and has green leaves and bright yellow flowers. In case you wonder, as I did, what on earth a ‘sub-shrub’ is, the answer appears to be ‘a bush’.

I also wondered where the ‘houseleek’ name came from, for both this plant and for its smaller relatives. Apparently the word ‘leac’ in Anglo-Saxon meant ‘plant’, so the name literally means ‘house-plant’. I suspect that these exotic beauties have been kept indoors for a long, long time, if only because exposure to the elements in the UK normally means the end, at least for the more sub-tropical species.

A wild tree houseleek on Gran Canaria (Photo One)

There are many ‘domesticated’ varieties of the plant: you might be familiar with the green version, where the leaves are edged with scarlet.

There is also a variegated version, like this one from the Exotic Gardens in Monaco.

I have always had a soft spot for succulents as house plants: when I was a child they seemed so exotic to me, and I loved the way that you could break off a plantlet, stick it in a pot, and away it went. Sadly, I also learned that you could kill them with kindness: too much water and their shallow roots rotted, their leaves turned to mush and a favourite plant was suddenly very much an ex-plant. But with a little neglect (and a regular inspection for white-fly) they flourished. Mum would sometimes rescue the plants from her office – as soon as a plant looked ragged the plant-care company would throw it away, but Mum often came home with an enormous succulent in a black bin bag.

‘All it needs is a little love and attention’, she’d say, and within a few monts it would be magnificent. We didn’t have a lot of room in our little house in the East End, but we surely had some fine house plants. 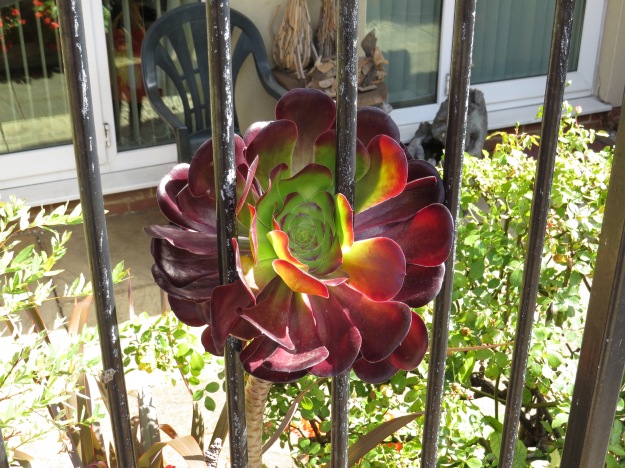 Aeoniums are part of the stonecrop family (Crassulaceae) which includes not only exotics like our plant, but Alpine flowers such as the Sempervivums or sedums. What they share are adaptations for preventing waterloss: in both semi-arid areas and mountainsides there is often thin soil (which allows water to flow away quickly) and exposure (which means that the sun and wind make a plant prone to dehydration). Aeoniums have thick leaves which store moisture and resist desiccation, and these leaves can curl up if the conditions are too hot or dry, resulting in something that looks a little like a globe artichoke. Once they flower they often die, which is why it’s worth potting up a few baby plants while the plant is still growing. 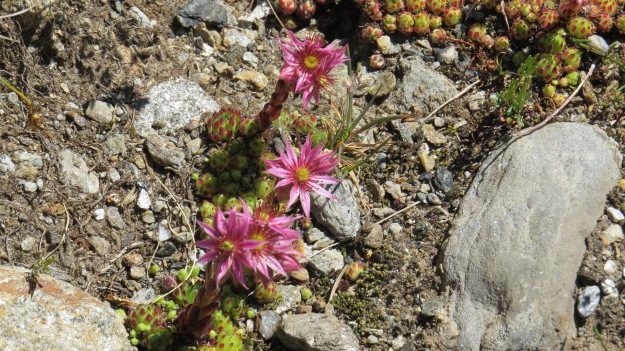 In general, Aeonium plants cannot survive frost, but there are some naturalised populations in the Scilly Islands, where they take advantage of the balmier temperatures.

Now, I didn’t expect to find that this plant was edible, but I did find a rather interesting Youtube video, where the author eats the leaves of wild-harvested Aeonium arboreum that s/he finds on the coastline in Chile in a salad with tomato and cucumber (the plant is naturalised widely in many parts of the world where the climate is favourable). The spring leaves are apparently also used medicinally, principally for heart and liver problems. You can find the whole video here and very interesting it is too, especially on the subject of why the Canary Islanders only seem to have used the plant for medicinal purposes rather than as food (short answer – when you have bananas and mangoes why would you eat succulents?)

And finally, a poem. It’s rare that I read one that makes me laugh out loud, but this one did the trick, though I fear this is not its intention. The poet, John Gray (1866 – 1934), was romantically involved with Oscar Wilde ( he was possibly the inspiration for the character of Dorian Gray). He may also have been in a dalliance with the Arthur Edmonds of the dedication, who was Gray’s co-worker at the Confidential Enquiry Branch of the Civil Service.  Gray was part of the Aesthetic movement, and I can imagine him sitting at his desk, head in hand, a bouquet of lilies dying gently on the shelf behind him. He ended up as a Catholic priest, so at least this was only a passing phase.

In the poem, the ‘metal Burns’ is thought to be a bronze statue of the poet that stands in Victoria Embankment Gardens in London. And what a work this poem is! I love the ‘leprous daisies’ and particularly the ‘foul child’ – there is such a sense of languid distaste for all things wholesome and pure that I find myself reaching for the absinthe. And yes, the link with our poor plant is tenuous to say the least, though it is at least a ‘houseleek’. You try finding a poem about Aeonium and see where it gets you  :-).