Dear Readers, it isn’t always the big, charismatic animals that move me when I’m on a trip: sometimes it’s the little creatures that make my heart race. When we were coming back from seeing the mother orangutan and her baby, our guide Hazwan gently manoeuvred the boat close to a rocky outcrop. In a small cave just above the water’s edge we could see small brown shapes clinging to the walls. At first I thought they were roosting bats, but as we got closer I could see that each shape was a beautifully-constructed nest. Glossy swiftlets use their own saliva to make the main construction, but then camouflage it with grass, although they have been spotted using other materials, according to what’s available – lichen, straw and moss have all been included, making me think that birds are not just adaptable, but may have personal preference when it comes to making a ‘home’.

The parent birds had been zipping around our heads since our first arrival in Borneo, and they flit in and out of the cave with mouthfuls of insects. I dread to think what the insect population of Borneo would be without all these insectivorous birds and bats.

Glossy swiftlets really are little creatures: at only 10 cm long they are half the size of a European swift. Like all of the swift family, they have tiny feet, which are only really useful for clinging onto the side of their nests, and are useless for walking. They have a large gape, for capturing all those bugs, and enormous eyes. Those long wings make them supremely flexible in the air, and they change their flight pattern according to where their prey is: this in turn depends on the air pressure. Sometimes the swiftlets were so high that they looked like tiny specks of dust, other times they swept just above the surface of the water. I could watch them all day.

These swiftlets are not the ones whose nests are harvested for birds’ nest soup (the intermingling of grass with the saliva means they can’t be eaten), but they are closely related to that species, and there has been some talk of using glossy swiftlets as foster parents for abandoned eggs and fledglings of their more ‘valuable’ cousins. We saw several ‘swift houses’ in Borneo – these buildings are constructed to encourage the wild edible-nest swiftlets (Aerodramus fuciphagus) to build their nests inside. The humans protect the swiftlets from all persecution, in return for harvesting their nests once they’ve finished with them. What I couldn’t find out is whether the swiftlets would normally return to an existing nest, or if they made a new one every year. If the latter then it seems to me that very little harm is done, but if It means that the birds have to rebuild every year, it must surely add to their stress (imagine coming home after six months away to find that someone had eaten your house).

Incidentally, can I recommend a most fascinating book on the subject of human/animal interactions of this kind? ‘Harvest: The Hidden History of Seven Natural Objects‘ by Edward Posnett covers eiderdown, civet coffee and, yes, birds’ nest soup, and there was something to muse about in every chapter.

Onwards! For once, it is nice to report on a species which is ‘least concern’ as far as conservation goes. Glossy swiftlets can be found not just in Borneo but all over this part of Asia, from India in the west as far as the Solomon Islands. It is an adaptable little bird, nesting in the suburbs of Kuala Lumpur as happily as in a cave in Borneo. How happy they made me feel as they rocketed in and out of their colony, oblivious to the snap-happy crew on our little boat. There is something about being lost in a moment in the company of animals that can wash away everything else. 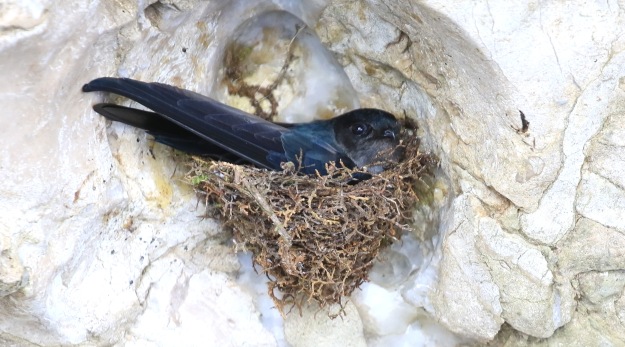