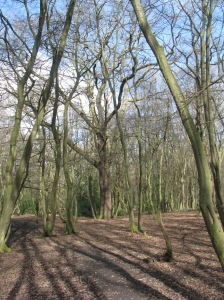 When I enter Coldfall Wood, and close the gate behind me, I feel a little nervous. Forests are deeply embedded in our imaginations as places where little children are thrown into ovens by witches, and  wolves gobble up rosy-cheeked grandmothers. They feel like dangerous places, where bodies are buried. Nothing pleasant happens to women who dare to go into the woods, especially those with nothing to protect them but the binoculars hanging around their necks. But I refuse to be deterred. If there were more women in the woods, there would be less chance of anything happening to them. Plus the most dangerous thing I’ve done today is jaywalk across the High Street. Cars are a much bigger danger than crime, though the papers might want you to think otherwise.

A few paces into the wood, and the noise of the traffic on Creighton Avenue is already muffled. I walk down, past the information board, and along the path that winds between the twisted hornbeam trees. Many of the trees are distorted, writhing up towards the sky . For many years, the wood was managed by coppicing. The hornbeams were cut back every year and the wood used by the local people for firewood. This led to lots of slender, twiggy regrowth, all ready to be cut down again in the following year.

These coppiced trees often grew around a ‘standard’ oak tree. This tree would be allowed to grow and mature while the hornbeams were being cut back, until it, too, would be felled, to make the beams for a fine house, or even for a ship. What moves me is that the people who planted and nurtured this oak tree knew that they would not live long enough to see it harvested. It was a true investment in the future.

Coppicing ceased in the 1930’s, and as a result those spindly hornbeam trees have grown up, their canopies shutting out the sun and starving the forest floor of light. However, in 2006 it was decided to cut back some of the trees to see if it increased the number of species of plants that would flourish. It worked – over a hundred new species appeared, many of them from seed that had lain dormant for decades. One plant, the Slender St John’s Wort, has seeds that can wait two hundred years underground, before bursting through into new light. 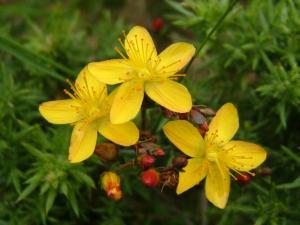 This year, the coppicing is being extended. I examine a sign attached to a tree and, to my delight, I see that Haringey council are using horses to take out the logs, rather than compacting the soil with heavy machinery. I look forward to visiting regularly to see what plants are turning up, and maybe even to getting a glimpse of the horses in action.

As I get to the northern edge of the wood, I hear the sound of crows in the trees. 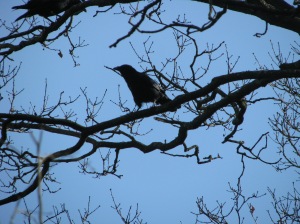 I have something of an Alfred Hitchcock moment as I look towards the playing fields, and count thirty of the birds. I had no idea that they were so sociable. In the trees overhead there are easily another forty, all cawing and posturing and chuckling. I suspect that these are young birds, pairing up and making friends. 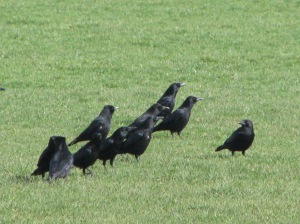 A murder of crows?

I move on. So far I have seen one man with wraparound sunglasses and a red setter, and an elderly lady dragging a shopping trolley through the mud. Suddenly, I hear another call: 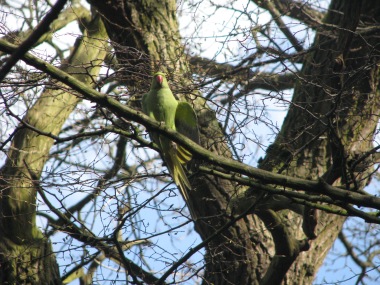 A ring-necked parakeet has landed on the branch just above me. While people are often sniffy about these foreign ‘invaders’, it seems to me that London is not a pristine environment, but one that is constantly changing and full of opportunities. A city is a hard place to survive in, and climate change will only increase the uncertainties about what can flourish here. Everything is in flux.

Good luck to them, with their lime-green feathers and chattery, sociable flights over my house every night, I say.

And then, I have a surprise. 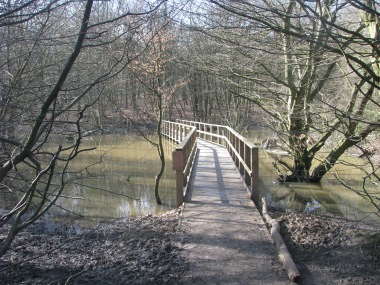 This area is often damp and muddy – last time I was here, there was a small pond. Now, there’s a lake. The water comes right up to the edge of the boardwalk, and back in January this too was under water. Two moorhens were bickering in the reeds. The water is the colour of weak tea. As this has been officially the wettest winter on record, it is not surprising that the streams and culverts that normally drain ‘The Everglades’ have been overwhelmed.

So, this tiny wood, sandwiched between allotments, a cemetery, some playing fields and a residential street, is still full of interest. As I leave and walk uphill towards Muswell Hill and a welcome cup of coffee, I think about how easy it is to overlook the pleasures that I  have right on my doorstep, and how easy it is to talk myself out of exploring. I intend to be more intrepid in future.