Of all the plants in my garden, the bumblebees love the thistles the best. Even on a wet or overcast day, there is a constant stream of stripey insects burying themselves in the blossoms in a kind of ecstasy. Sometimes, they seem to faint into the flowers, resting for up to half an hour before rousing themselves and moving on. On other occasions, there will be a good-natured tussle over possession of a flower, as in the little film below, where we see a White-tailed bumblebee and a Tree bumblebee feeding together with only a modicum of pushing and shoving, and an Early bumblebee flying in part of the way through.

All bumblebees are ‘tundra-adapted’ – they evolved from insects that lived in the short summers and cold conditions around the Arctic Circle. This means that they can move around in lower temperatures than many insects, and also accounts for their endearing furriness.  Bumblebees are sturdy enough to be able to fly when it’s wet, as I noticed last week while I was standing at my kitchen door, watching the bees come and go in spite of the rain. In fact, the big danger to bumblebees is overheating, not being chilled.

This year, so far I have noticed three main species. The bumblebee below is an Early bumblebee. This creature is very distinctive, with its yellow bands and orangey-red tail.

This bee will only be on the wing for another month or so – after that, the nest will break up and the new queens will hibernate until next spring.

If you see an Early bumblebee with a yellow face, you are looking at a male bee. Because male bees are generally thrown out of the nest once they hatch, you will sometimes see them sleeping on a flower like a pixie. One summer night I saw half a dozen male bees, each wrapped around a lavender flower as if it were a teddy bear.

The next commonest bumblebee in the garden at the moment is the Tree Bumblebee. This is an intriguing animal – it was discovered in the New Forest in 2001, the first time the insect had been recorded in the UK, having previously been found only in mainland Europe. Now, it has been found as far north as Hull, most likely because of the change in the climate. It is unmistakable, in its livery of ginger, black and white. It is rumoured to be more aggressive than other bumblebees, but I think this is slander – the only evidence of bad-temper I have ever observed is a gently raised middle leg, which is the bumblebee equivalent of a Yellow Card.

The last species that I’ve noticed is the White-Tailed Bumblebee. 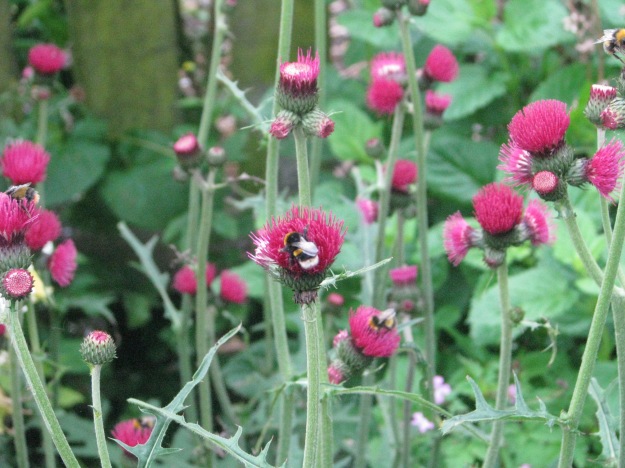 This bee fascinates me because sometimes it cheats. I was sitting in the garden earlier this week (huddled in a raincoat because of the drizzle) when  I noticed a White-tailed Bumblebee gnawing a hole into one of my Hawkshead fuchsia flowers, right up where the blossom joins the stem. She then proceeded to lap up the nectar. Chances are that her tongue was not long enough to get to the food the normal way, so she broke in instead. Furthermore, she kept flying away and then returning to the injury that she had made in the flower. Of course, I don’t begrude her her illicit meal – the lives of bumblebees are so short, and so busy, that I admire her inventiveness.

Although there has been a lot in the press recently about the demise of the honeybee, our native pollinators, such as bumblebees, are also in decline. Although there are many reasons for the decline, I try to help by making sure that there are always plants which are attractive to insects in the garden. There are many schemes to help people select bee-friendly plants when they go to the garden centre, but there is in fact an even simpler way than perusing the labels – just stand and watch and listen. Some plants will be covered in bees, others will be completely ignored. I always let the bees tell me what they’d like me to buy. I guess that’s why I’ve ended up with so many thistles.

1 thought on “What’s That Bumblebee?”