On Tuesday, I passed the Bald-Faced Stag pub at the crossroads in East Finchley. Ever since we moved here, I have felt sorry for the stag – he was painted in matt-brown, peeling paint, and looked a little like one of Santa’s Reindeer with a bad case of mange. But this week, he has been transfigured into a mythical creature, a golden stag, and every detail of his pelt and antlers shines in the intermittent sunshine. It cheers me no end to see him looking in such fine fettle and so, with a new feeling of joie de vivre, I head down to Cherry Tree Wood to see what’s going on.

I haven’t been here since May, and there is a definite feeling of autumn approaching – the leaves are already starting to turn, and there are blackberries everywhere. But there are also lots of Speckled Wood butterflies.

These are creatures of woods and forests, and seem to like the shady places that other butterflies shun. Because much less coppicing takes place in woodland than in previous years, Speckled Woods have been doing very well, and have extended their range right up into Scotland.  However, the males do like to find a patch of sunshine to protect as their territory, following the sun about during the day. I watched this male for some time. Everytime another Speckled Wood approached, he flew up and drove it off, battering it with his wings.

Speckled Wood rising to fight off a rival

Speckled Wood are the only British butterflies that can survive the winter either as a chrysalis or as a caterpillar. This means that you can see adult butterflies from as early as March to the end of October. As I walked on, I noticed another Speckled Wood, but this one was a shadow of the male I’d seen earlier.

Its wings were torn, the pattern faded. It didn’t display with its wings open, but fluttered apologetically from one patch of ivy to another. Adult Speckled Woods don’t feed from flowers, but feed mainly on the honeydew spilt onto leaves by aphids, and that’s maybe what this insect was doing. The lives of most butterflies are short (sometimes only a few weeks), so it’s good that this year has had such a bright, warm early summer – the chances are that this butterfly will have reproduced, and that its green, hairy caterpillars will already be gorging themselves on couch-grass and the wonderfully named Yorkshire-Fog. 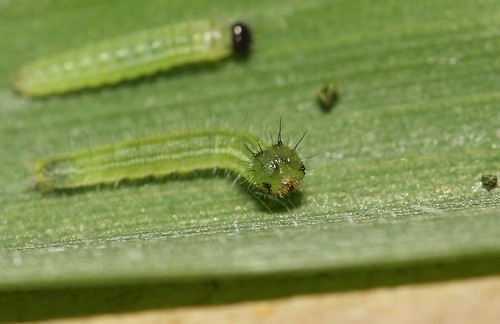 As I messed about with my camera, I had a strong feeling that I was being watched. And, indeed, as I turned, I saw a grey squirrel standing on tippy-toe, looking at me with some curiosity.

The wood is full of squirrels at this time of year – dashing about with acorns in their mouths, growling at one another from the tops of trees, hiding behind the trunks of oaks and peering around to see if I’ve moved on yet. They are conflicted little creatures, not tame, and yet not so wild that they don’t want to stick around in case I happen to have brought a packet of peanuts with me. The one who was watching me seemed to be in a state of controlled agitation, hopeful but nervous, as he skirted past me, occasionally peering back to see if I’d dropped anything.

I have written before about how tame this wood seems compared to Coldfall Wood  . It has a children’s playground, a coffee kiosk, playing fields and tennis courts. It even has a somewhat decrepit toilet block. And yet, there are still wild corners here, places where people can camp out for the night, make a den, sneak out for a night of passion under the stars. I just wish they’d take their rubbish with them…

In Coldfall Wood earlier this year, I stumbled across a double mattress that someone had managed to drag through a gate, along a narrow path through the trees and over a ditch in order not to have to lie on the ground. It seems to me to somewhat defeat the object, a little like taking some teabags and a kettle on holiday with you. But who am I to say? I can happily report that when I visited a few weeks back, the mattress had gone, though I suspect this was the work of the doughty council rubbish-collection department rather than the original users.

This is not to say that I object to people enjoying the pleasures of the natural world. As I headed home, I saw some children who had  managed to resist the lure of the climbing frames and the swings, and were climbing a tree. They fell silent as I passed, as if they expected to be shouted at. I pretended that I hadn’t seen them, and heard them giggle with relief as I went past. I had a smile on my face, too. I remember climbing trees, sitting in the branches and looking down, triumphant. It’s an adventure every child should be able to have, the chance to be wild for a few hours. What are grazed knees and torn clothing compared with a sense of freedom that can fortify a child for their whole lives?

An entrance to a secret den?

3 thoughts on “The Speckled Wood Butterflies of Cherry Tree Wood”