Lone Herring Gull (Larus argentatus) – this bird is in his or her third winter. By next year, s/he will have full adult plumage

When I went to Cherry Tree Wood on a cold, blustery day last week, I didn’t expect to see anything unusual.  The tits were quiet, the blackbirds scuttled in the undergrowth, and even the squirrels growled less than usual. But there, next to a muddy pond in the middle of the playing field was a single gull. This was a Herring Gull, the quintessential ‘seagull’ of seaside towns. He was a young ‘un, with a few pale grey feathers on the head and a general air of melancholy. Where were the other Herring Gulls? Had he popped in and got left behind, or did he want to be alone? 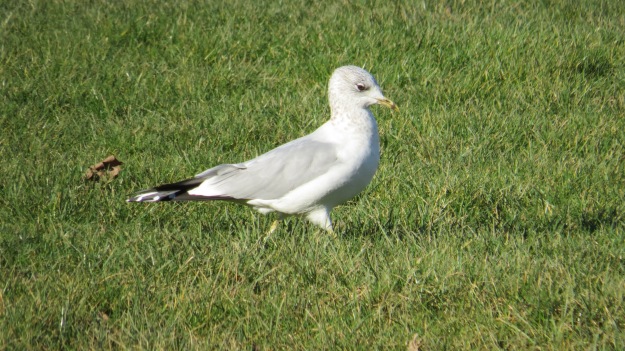 Herring Gulls are not unusual in Greater London, and indeed they seem to be making themselves at home all over the place, with breeding taking place in Billingsgate Market, Beckton and even at Paddington Station. But I have only to hear their call to be transported to the seaside, and indeed, at one point when we were living in our previous house we heard them so often that we nicknamed our borough ‘Islington-on-Sea’. For anyone who is unfamiliar with their half melancholy, half manic outpourings, I suggest a little listen to this courtesy of the Garden-birds.co.uk website.

I have had several encounters with gulls, and have come to the conclusion that they are much more complicated, intelligent birds than we normally assume. The first time that I really noticed one was when I was on holiday in Paignton in Devon. We were staying in a splendid Bed and Breakfast establishment, but I had a terrible cold,  and was laying in bed feeling sorry for myself. As I gazed out of the window I noticed that a Herring Gull on the roof of the house opposite was sliding down the tiles as if skiing down a slope. This was so unexpected that it distracted me for a moment. I levered myself up so that I could have a better look. The gull had arrived at the gutter, and had a little look around. Then, he fluttered back up to the top and slid down again. I was astonished. By the time the bird did it for the fifth time, I had come to the conclusion that he or she was playing. Furthermore, I felt much better, and was able to get up and go downstairs for breakfast.

We think nothing of it when baby mammals play, but it isn’t often observed in birds. Crows and parrots, those geniuses of the bird world, are known to find things to amuse themselves with, not just when young but throughout their adult lives too. However, Herring Gulls have been observed dropping objects and trying to catch them in mid-air, especially when it was windy and the task was therefore more challenging. I wonder how many other birds enjoy playtime without us noticing?

Adult Herring Gull (By Scottmliddell (Own work) [CC BY 3.0 (http://creativecommons.org/licenses/by/3.0)%5D, via Wikimedia Commons)

We once stayed in a chalet in Lochinver in Scotland. When we arrived, we noticed a huge gull standing on the handrail of the front porch. Up close these are intimidating birds, with the pale eyes and intense stare of the monomaniac. He watched us unlock the front door, and unload the car. Eventually he flew off,  so we settled in and eventually went to bed, even though the sky was barely dark, what with it being midsummer.

The gull was pecking at the glass door. At first it was a relatively gentle sound, but, as we continued to ignore our supplicant, it got louder and louder until we were  afraid that the panel would shatter. I got up and went to the kitchen. We had only arrived on the previous day, so the only food in the house was some welcome packets of shortbread biscuit. At the sight of me unwrapping them, the bird flapped energetically. I eased the door open and threw out a biscuit. The bird caught it deftly, broke it in two, ate one half and then the other, and then, sizing me up to see if there was any more, shuffled forward in that strangely mincing way that gulls have, wings half open, until I gave him the other biscuit and he flew off, granting us a few more hours sleep.

Naturally, he visited every morning for the rest of our trip, though he normally waited until about 7 a.m. Maybe he realised that he’d broken our will early on.

Food is a great motivator for gulls, as ice-cream sellers at many a seaside town will attest. When we went to Greve de Lecq in northern Jersey, we were puzzled to see the vendors walking about with water pistols. And then we realised why. Half a dozen gulls were sitting on top of the spherical streetlights, surveying the scene. A family with a toddler bought an ice cream cone for their child. The little one was shuffling along, raising the cornet to his mouth when, seemingly out of nowhere, a gull flew down, arced over the child’s shoulder and snatched the ball of ice cream right out of the cone. It was a manoeuvre so beautifully timed and executed that I could only marvel at the bird’s skill, though I didn’t find it quite so funny when exactly the same thing happened to me the next day. The bird came so close that I felt its wingtip brush my hair. It seemed it would take more than a squirt from a water pistol to put these guys off.

Ambushed by Herring Gull in Ostende….(“Birdsniper” by loki11 – own work -place Oostende ( Belgium). )

Gulls always seem rather solemn birds, for all their penchant for mischief. Even when they are sliding down roofs or stealing icecream they seem to do it seriously, without the joie de vivre of crows or magpies.  And this is part of their charm. On a very, very wet day in St James’s Park, I stood with a dear friend of mine and watched a Herring Gull dancing on the wet grass. The bird’s legs were jigging and shimmying back and forth, sending up little splashes of water, but all the time his body and head were completely still. He looked like nothing so much as an ornithological version of Michael Flatley from Riverdance. Every so often, the gull would stop his merry contortions and reach down to pick up a worm. The bird looked so deep in thought, so philosophical, even as his legs were executing tricky figures of eight in the mud, that it was impossible not to laugh with delight. At this, the gull looked at me with what I could have sworn was contempt, and turned his back on me.

So, I am intrigued to see the lone Herring Gull in Cherry Tree Wood. Will he be there for long? Will he soon be heading off to find a mate? Is he, indeed, even a ‘he’? I will probably never know. One day, he will just be gone. But I have a great respect for these clever, bold, adaptable creatures, who seem to think that they’re every bit our equals. And who knows if they aren’t right? 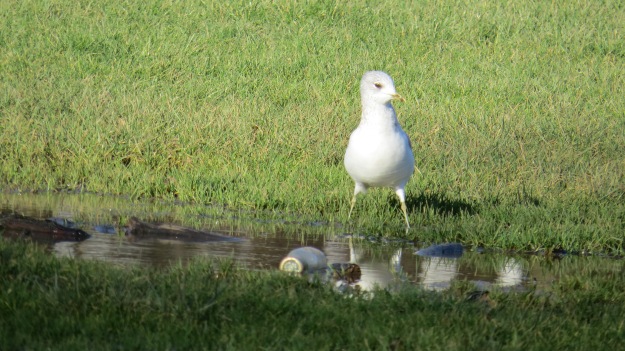 7 thoughts on “The Lone Gull”