Dear readers, my last visit to St Pancras and Islington Cemetery involved an unexpected detour. One of the heavily wooded paths in the older part of the graveyard was blocked by a massive fallen beech tree. As my friend , as agile as an anorak-clad mountain goat, clambered over the branches and found a way through, I slid down a muddy incline,into the middle of this mass of heart-shaped leaves. A little investigation showed that this was Lesser Celandine, normally one of the earliest woodland plants to flower. Gilbert White, the nature diarist of Selborne, records it flowering on 21st February, but mine were still not in bud in early March. However, one of the plant’s vernacular names is Spring Messenger, which gives some indication of its precocity.

Lesser Celandine in flower (By Alvals (Own work) [GFDL (http://www.gnu.org/copyleft/fdl.html)

The plant is a member of the Buttercup (Ranunculaceae) family. This is a group which prefers damp habitat,  which may explain why the  Latin meaning of Ranunculus is ‘little frog’. Like many buttercups, It can certainly spread when in the right situation. The tubers easily break off from the roots in disturbed situations, such as cemeteries which are trampled by eager middle-aged lady plant hunters. A subspecies, Ranunculus ficaria bulbifer, produces little bulblets at the junction of its leaves, which can be accidentally transported by walkers, dogs and wildlife. In its native range (the whole of Europe and West Asia)  it grows where few other plants can survive and is more of a boon than a problem. However, it is yet another ‘weed’ which is described as ‘invasive’ in other places. For example, it has been imported to North America, where its early flowering and spreading habit means that it can smother more ephemeral native plants.

The name ‘Celandine’ is interesting. In the UK, there is the Lesser Celandine and the completely unrelated Greater Celandine, which will undoubtedly be a subject for a future post, as there is a great mass of it growing at the side of my house (I like to have a few ‘weeds’ up my sleeve in case domestic emergency or sheer laziness stop me from walking in the woods or the cemetery). Just to say here that the name Celandine derives from Chelidon, the Greek name for the swallow. This works for Greater Celandine, which flowers at about the same time as the swallows arrive, but Lesser Celandine flowers much earlier. I suspect that someone back in antiquity got confused because the flowers of both plants are yellow, and look superficially similar. Either that or, as Richard Mabey suggests, the plant was seen as a kind of ‘vegetable swallow’, a harbinger of spring.

Flower of the Greater Celandine. Doesn’t look much like that of Lesser Celandine to me (By Alvesgaspar (Own work (own photo)) [GFDL (http://www.gnu.org/copyleft/fdl.html)

Now, let us return to the Doctrine of Signatures. As you might remember, this was a belief that God had put a sign on plants that were useful to human beings. The buds of Nipplewort, for example, are shaped like nipples, and so the plant was said to be good for all kinds of things related to breast feeding. Have a look at the picture below, in particular the roots of the plant, and see if you can guess what Lesser Celandine was said to be good for. 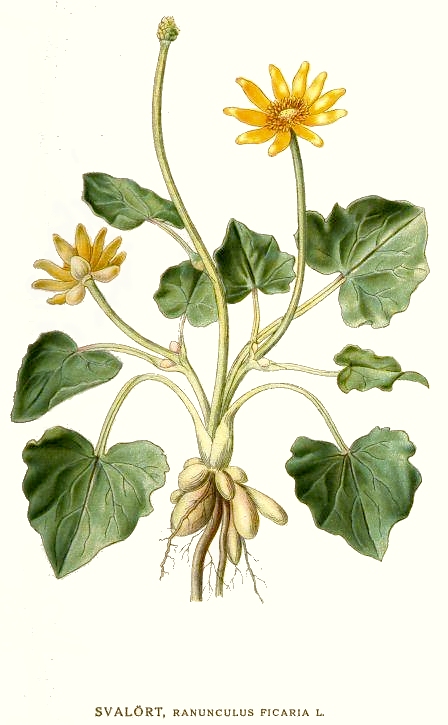 Do those roots remind you of anything?

One of Lesser Celandine’s alternative names was Pilewort, and it was used to treat hemorrhoids. In Germany, it is known as Scurvygrass, and was harvested because its leaves are rich in Vitamin C. As it appears so early, it must have been a blessing to eat something green just as winter was coming to a close, and the cupboard was bare. In Russia, the dried herb is also used for a variety of ailments.

Wordsworth loved Lesser Celandine, and wrote three poems about it. This is part of my favourite of the three, which sums up a little how I feel about all the ‘weeds’ that I write about every week.

Comfort have thou of thy merit,
Kindly, unassuming Spirit !
Careless of thy neighbourhood,
Thou dost show they pleasant face
On the moor and in the wood,
In the lane; — there’s not a place,
Howsoever mean it be,
But ‘t is good enough for thee.

Wordsworth wanted the Lesser Celandine to be depicted on his tomb, as it was his favourite flower. Unfortunately, the stone mason carved images of the Greater Celandine, which is not, as we’ve seen, the same thing at all.

Note the ‘wrong’ Celandine on the right hand side of the monument. (John Salmon [CC BY-SA 2.0 (http://creativecommons.org/licenses/by-sa/2.0)%5D, via Wikimedia Commons)

Richard Mabey, in his magisterial ‘Flora Britannica’, notes that Wordsworth made the following field note about the Lesser Celandine.

‘It is remarkable that this flower, coming out so early in the Spring as it does, and so bright and beautiful, and in such profusion, should not have been noticed earlier in English verse. What adds much to the interest that atttaches to it is its habit of shutting itself up and opening out according to the degree of light and temperature of the air’.

And this is exactly what the plant does. Wordsworth was a great walker and observer of nature and, although unfashionable at the moment, had a deep love of his local area and of the plants and animals that lived there. He was a man with a big heart, and a great and enduring spirit, as so many poets are, but he was also modest and reclusive, How appropriate that he should have been so fond of this little, unobtrusive flower.