Dear Readers, it is always worth checking out what at first glance may appear to be a Woodpigeon or a Feral Pigeon, because it may in fact be a Stock Dove, to my mind one of the prettiest of Britain’s native doves. There are a pair of them in Coldfall Wood at the moment, and I was delighted when I spotted them.

How can you tell that they are, in fact, Stock Doves? For a start, they do not have the characteristic white neck marks, or underwing flashes, of the Woodpigeon. Close to, you can also see that they have dark eyes which give them a gentle expression – Woodpigeons have a somewhat icy glare, and feral pigeons have red eyes. Furthermore, Stock Doves have a broken black line on their wings, and don’t have a white rump. What they do have is an iridescent patch of blue green on their necks.  Below is one of the illustrations from the Crossley ID Guide, which has been made freely available for us bird-loving bloggers ( a very generous gesture I feel). 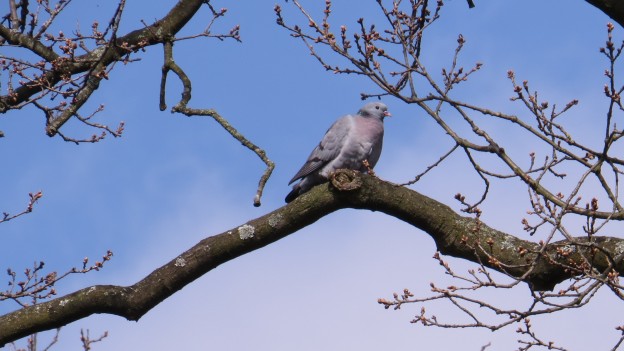 Stock Doves are not rare (there are approximately 270,000 breeding pairs in the UK), but the UK has over 50% of the total European population, and so they are accorded Amber conservation status by the RSPB. This compares with over 5 million pairs of woodpigeons, and a million pairs of collared doves. They are undoubtedly under-recorded, and are generally rather shy, not allowing themselves to be approached as closely as the other members of the family.

The name ‘Stock Dove’ does not refer to their status as food birds (though they have been used as such), but from the old English name for a tree trunk, post or stump – Stocc. This is because they nest preferentially in hollow trees, although they have had to diversify since Dutch Elm Disease caused the demise of their favourite tree, and have been found nesting in everything from rabbit warrens to ivy-covered walls to church spires. All hollow trees are fiercely contested these days, with woodpeckers, parakeets and owls all fighting for the same nest holes. In ‘Birds Britannica’ Mark Cocker and Richard Mabey recount how this self-effacing bird has been known to

“…attack jackdaws, break the leg of or even kill a little owl, and scrap violently with neighbours”.

The Stock Dove may look cuddly but you wouldn’t want to get on the wrong side of one. However, dead trees are generally allowed to stand in Coldfall Wood, and it may be that this pair have managed to stake out a suitable tree. I shall watch with interest to see if there are any juvenile birds later in the year. 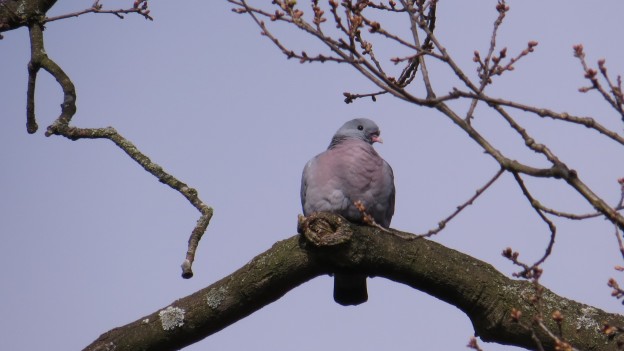 The song of the Stock Dove is also rather more subtle than that of other pigeons: it reminds me a little of a long-jumper’s run up, or maybe a frog calling from the bottom of a well. It’s certainly a tentative sound, easily lost against the squawking of parakeets, the shouting of wrens and the calls of great tits. 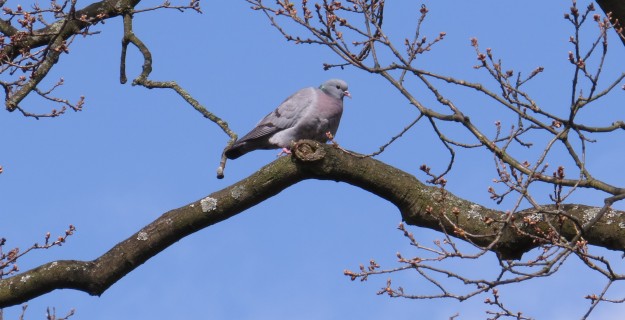 Although the Stock Dove has historically been considered a country bird, in recent years it has been making increasing excursions into the suburbs and even central London. In the early spring, the birds gather in flocks to find food, and a group of over 1200 was counted in the Maple Cross area in 2009, followed by 912 birds in 2010. In ‘Birds of London’, Andrew Self remarks that these are ‘possibly the highest gatherings of these birds ever seen in the UK’. As agricultural land becomes an increasingly hostile environment for many creatures, maybe the ‘encapsulated countryside’ in our cities is becoming a safer, more welcoming option. I know that I never cease to be astonished by the sheer variety of the plants and animals that I find in my half mile territory.

2 thoughts on “The Unnoticed Pigeon”