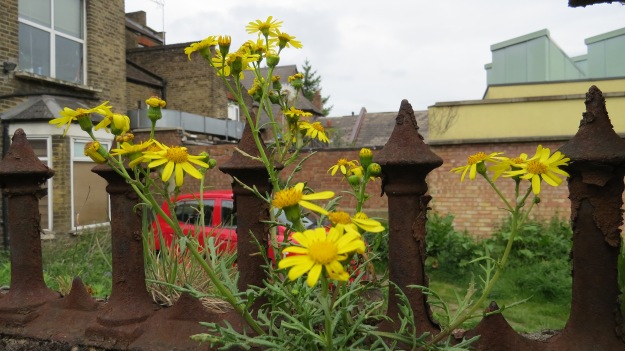 Dear Readers, Oxford Ragwort is one of those plants whose roots are so deeply entangled with humankind as to be rare outside of urban and industrial areas. Unusually, its path to freedom is well documented, and yet again Flora Britannica by Richard Mabey can be our guide. It was first planted in the botanical gardens of Oxford University, having been reputedly gathered from the rocks of Mount Etna. We have noted on several occasions that plants of mountain habitats often make excellent city dwellers, as they have a built-in tolerance for poor, scant soil and bright, dry, exposed situations. Furthermore, the genus name ‘Senecio’ refers to the way that the air-borne seeds resemble the white hair of an elderly person.  So, with its tolerance for city streets and its wind-carried seeds, it was tailor-made for urban colonisation. By the 1830s its seeds had wafted on to the old walls of Oxford, but it was soon provided with a mechanism for a much more ambitious journey. Like Buddleia, it was greatly aided by the railways, in this case particularly the Great Western. Oxford Ragwort loved the clinker beds by the side of the track, which maybe reminded the plant of its volcanic home, and its downy seeds were carried along in the slipstream of the passing steam engines. And so it advanced through England and Wales, providing a cheerful yellow chorus for mile after mile of the route. Indeed, on a recent trip to Surrey it seemed as if the whole trackside was a great flowerbed of Oxford Ragwort. 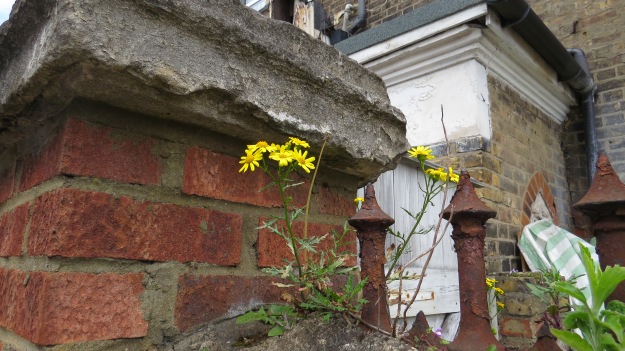 I have a great personal fondness for Ragwort, which dates back to the days when Bugwoman was Bug-girl. I was forever trying to rear caterpillars, and was particularly attracted to the yellow and black larvae of the Cinnabar moth. What child could resist these tiger-striped beauties? I found three, and spent the whole summer finding Ragwort for them to feed on. When, eventually, they turned into conker-coloured chrysalises, I put them in a big sweet jar containing twigs for them to climb up on when they emerged. I then put the jar into the cool darkness of the coal bunker under the stairs, and checked on them every single day.

Caterpillar of the Cinnabar Moth (“Tyria jacobaeae qtl1” by Quartl – Own work. Licensed under CC BY-SA 3.0 via Wikimedia Commons)

The bright colouration of the caterpillar is a bit of a giveaway that the insect is poisonous, and it acquires this poison from its foodplant, which is any species of Ragwort that it can get its diminutive jaws into. The plant contains pyrrolizidine alkaloids, which can damage the liver of humans and some mammals, but it is these very chemicals which apparently excite the caterpillars, according to a study of ‘gustatory responsiveness‘. There has been a great deal of excitement in the UK recently about Ragwort being poisonous to horses. This is true, but a call to eliminate the plant altogether would be a disaster not just for the Cinnabar moth, but for the 150 other species of insect which eat it or feed on its nectar. For a measured response to the debate, I recommend this website, which lays out the issues for both horse and insect enthusiasts, and those lucky people who are both.

One day, I opened the door to the coal bunker to find that, responding to some innate signal, my moths had emerged. Two of them were hanging from the twigs, their wings like blood-streaked black velvet. One, however, had not made it. It had got trapped between the edge of the jar and the twig, and had died without its wings opening.

This was an early introduction to the unfairness of life. How could this creature have made it all the way to the door of adulthood and then died? The occasion called for a ritual, and so I dragooned my poor younger brother into a moth funeral. I put the moth into a matchbox lined with cotton wool, while my sibling did the hard work of digging a grave. We solemnly processed the ten feet from the back door to the graveside. I intoned a few words while my brother looked solemnly on. Then, we laid a tombstone which consisted of a tile from the recent demolition of our fireplace. On it, in wax crayon, were scrawled the words:

I was a child of Victorian sensibilities, as you can see.

My little brother aged about 4 in 1966. What a long-suffering sibling he was. And is.

When I see Ragwort, I am instantly reminded of those days of childhood, when time stood still at the sight of a caterpillar scraping endless half-circles from a leaf and when a small ritual seemed the only way to right the world when something went wrong. I still feel most truly myself when I am totally absorbed in the goings on of a plant or an animal – time seems to fall away, along with all my mundane concerns. The phrase ‘inner-child’ makes many people cringe, and yet I think that all of us are like Russian Dolls, with our earlier versions still alive and sometimes kicking. To me, there is nothing wrong with that non-judgemental state of child-like wonder, when we have no preconceptions but truly ‘see’. I’m sure it’s a better tonic than anything the doctor could prescribe, and with no side-effects other than a new bounce in the step and a softer, more open heart.