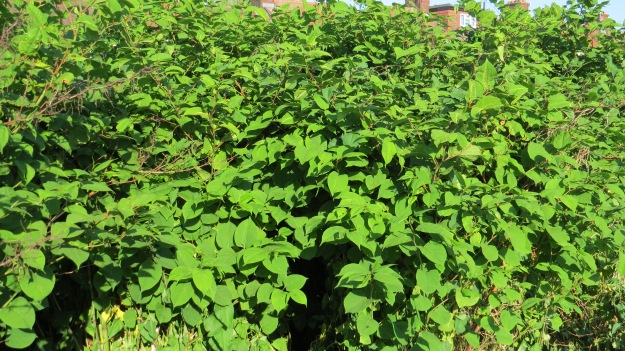 Dear Readers, a few weeks ago I was alerted to the presence of Japanese Knotweed growing beside the playing fields which border Coldfall Wood. A worried person had reported the plant to Haringey Council, because he was concerned that it would spread into the wood itself. It was reported that children were using its stems as swords, and that ‘Japanese’ ladies were taking cuttings. Naturally, I had to see this botanical phenomenon for myself.

Once I’d found it, I could not believe that I’d missed it. There are two stands of the plant, one bordering the cemetery, the other close to some houses on the other side of the playing fields. Each stand is about three metres tall, but what amazes me is how dense it is – the bamboo-like stems erupt within centimetres of one another, forming something that resembles a panda’s breakfast. Nothing can grow where Japanese Knotweed grows, I’m sure.

How can you identify Japanese Knotweed? Its leaves are described as ‘shield-shaped with a flat base’. 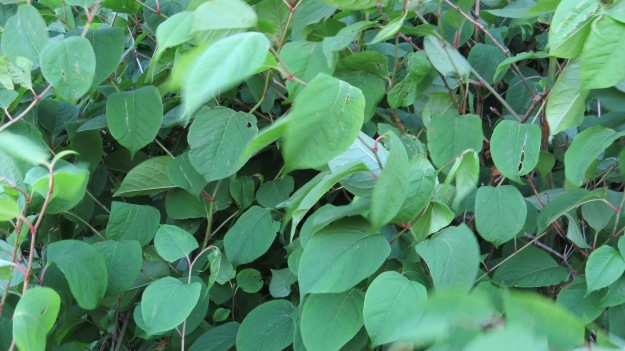 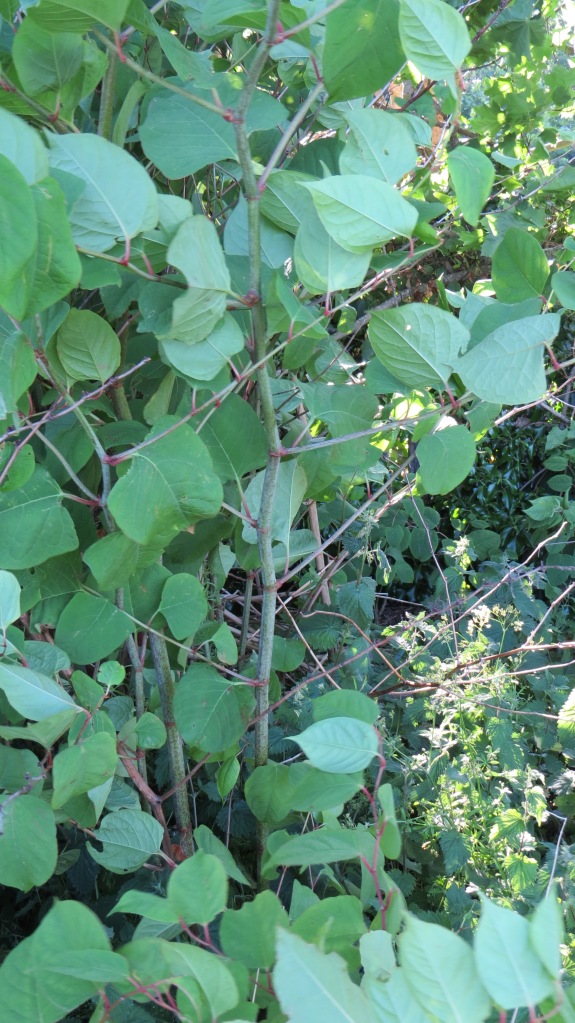 It flowers in late summer, and has tiny spikes of white flowers. These are the female flowers – male flowers are unknown in the UK. This does not stop the plant from spreading, however, as we shall see. 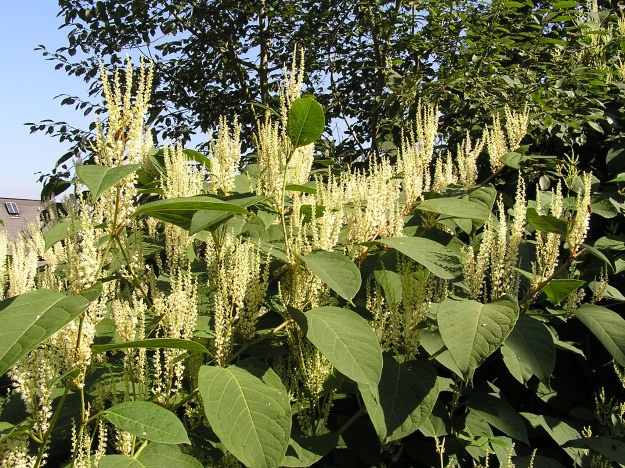 The most distinctive feature of Japanese Knotweed, however, is its rhizome, which is a kind of root which sends out new stems and stalks. If you dig some up, it looks a little like ginger, but the inside is orange, and it is said to snap like a carrot. It is this rhizome which enables the plant to form thickets, and which means that it is so tenacious – it can regenerate from any tiny piece which is left behind. 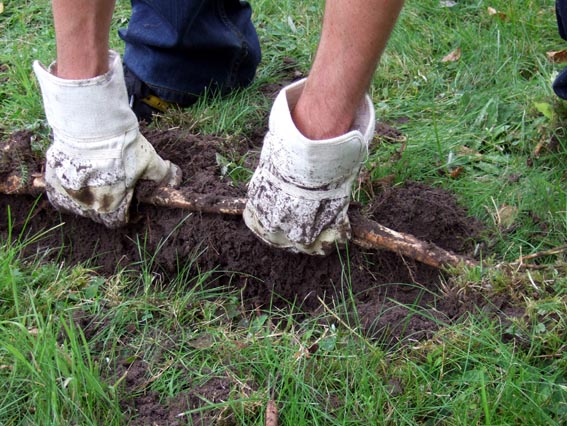 Someone having fun with a Japanese Knotweed rhizome (Klarerwiki [CC BY-SA 2.0 de (http://creativecommons.org/licenses/by-sa/2.0/de/deed.en)%5D, via Wikimedia Commons)

As I stood and looked up at the Japanese Knotweed ‘forest’ that was growing, I could easily see how it could block waterways, out-compete all other plants and be a nightmare to get rid of. The rhizomes can also occasionally cause structural damage, which led to a period of hysteria by mortgage companies who refused to lend to home-owners with the plant in their garden, or in a neighbouring garden. This prompted the following response in a 2012 report by the Royal Institute of Chartered Surveyors, who described Japanese Knotweed as ‘being treatable and rarely causing severe damage to the property”:

“There is a real lack of information and understanding of what Japanese knotweed is and the actual damage it can cause. Without actual advice and guidance, surveyors have been unsure of how to assess the risk of Japanese knotweed, which can result in inconsistent reporting of the plant in mortgage valuations. RICS hopes that this advice will provide the industry with the tools it needs to measure the risk effectively, and provide banks with the information they require to identify who and how much to lend to at a time when it is essential to keep the housing market moving.”

As a result of this, many lenders relaxed their criteria, and are now mainly concerned with the plant if it is growing within 7 metres of the property. If so, it will ask for a guarantee of elimination. Many companies are now offering ‘Knotweed Solutions’ and a warranty to vouch for the extermination of the plant.Property Care Association chief executive Steve Hodgson, whose trade body has set up a task force to deal with the issue, said:

“Japanese knotweed is not ‘house cancer’ and could be dealt with in the same way qualified contractors dealt with faulty wiring or damp.”

By the way, I suspect that trying to get rid of a well-established plot of Japanese Knotweed by yourself would be back-breaking and probably ineffective, plus the remains of the plant are classified as ‘Controlled Waste’, which requires disposal at registered Landfill sites. 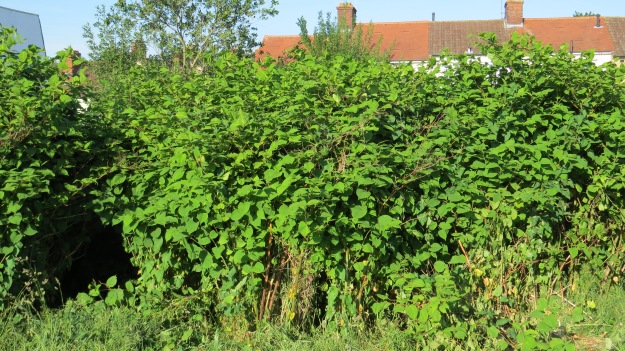 The normal way to get rid of Japanese Knotweed involves a massive dose of herbicide, followed by lots and lots and lots of digging and sieving. However, there are alternatives.  In Haida Gwaii, islands to the extreme north-west of Canada with a rare and beautiful flora, they have been experimenting with the application of sea-water to the plant, which is said to be showing promising results. Here in the UK, a Japanese aphid (Aphalora itadori) which preys specifically on Japanese Knotweed was released back in 2010. It seems to be establishing itself well, and although I am nervous about ‘fighting fire with fire’ in this way, so far there seem to have been no detrimental side-effects.

Japanese Knotweed is not new to the UK – it was first introduced in 1825 as a garden plant, and was first recorded in the wild in 1886. As I turn to my trusty Flora Britannica by Richard Mabey, I discover that it was a great favourite with Victorian gardeners, although they tended to plant it in their plantations and by their streams as it was too vigorous for any smaller space. Alas, it was a plant with ambition, and by 1900 was growing wild in London. By the 1960’s it was everywhere, from Lands End to the northern tip of the Isle of Lewis. In Cornwall it is known as ‘Hancock’s Curse’ because it was originally planted in the garden of a Mr Hancock. Everywhere it is discovered it seems to generate a frisson of alarm, much as if John Wyndham’s Triffids had turned up. And yet, like all plants, Japanese Knotweed is not an unalloyed monster, just a plant that has found itself in a habitat that is to its liking, and which is taking advantage of the fact. 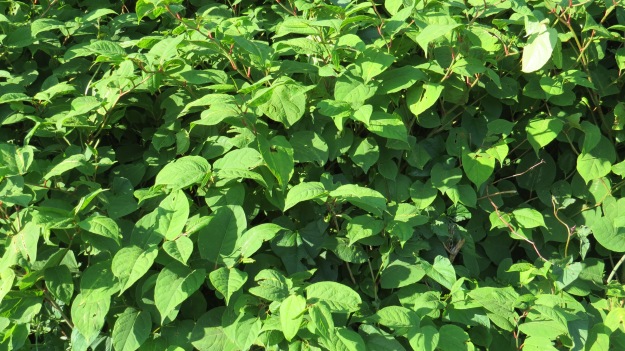 One way of keeping it under better control might be to do what the Japanese ladies who selected some ‘cuttings’ were probably doing, and that is to eat it. The plant is in the same family as sorrel and rhubarb, and the young shoots can be used to make pies or jam (though it is recommended that the shoots are under a foot tall when picked, so you’ll need to be quick!) In Dyfed in Wales, the leaves are used like spinach, and in Swansea the children suck the sap from the stems, and call the plant ‘Sally Rhubarb’. There is a fine selection of recipes for Knotweed here but if you are foraging, do take care not to spread the plant in anyway, and to make sure that any waste parts of the plant are disposed of properly (i.e not thrown into your compost bin 🙂 )

It should not be forgotten that Japanese Knotweed is also a valuable plant for pollinators, and is useful for beekeepers because it flowers late into the year, when many other plants have past their prime. The honey is said to taste like a mild form of Buckwheat honey, which is not surprising as Buckwheat is another member of the family that includes the Japanese Knotweed. 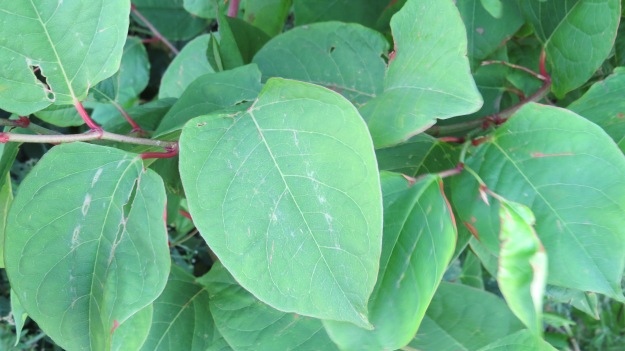 In Chinese traditional medicine. the plant is used for treating some heart conditions, as a laxative (let’s not forget that it is a cousin to rhubarb), and as a tonic. Some research has shown that it may be useful in treating Alzheimer’s disease, and it is a useful source of vitamins A and D. Like rhubarb, it also contains a lot of oxalic acid, which can aggravate rheumatism and kidney stones, so it should be used with discretion.

So Japanese Knotweed, like any plant, is not a thug without any redeeming features. In its original habitat, I suspect that it was a graceful, useful plant, and maybe it could be here, too.Few organisms are entirely heroes or villains, and it is often our lack of knowledge that makes us consider them so. There is no substitute for a little research, and for taking a deep breath before demonising anything, plant or animal.

9 thoughts on “A Knotty Problem”