Dear Readers, while I was in Milborne St Andrew in Dorset with my parents this week, I went out in search of autumn. It is my favourite season, with its lengthening shadows, golden light and occasional sun-blessed days. And being in the autumn of my own life I sometimes feel a certain restlessness, a kind of scratchy irritability and dissatisfaction. At times like these, I need to get out and walk, and tune in to something that’s outside my own head. Sometimes, it takes me a while to find what I’m looking for, to slow down enough to ‘see’ properly. But this time, I was pummeled into paying attention by creatures that were even more restless than I am. 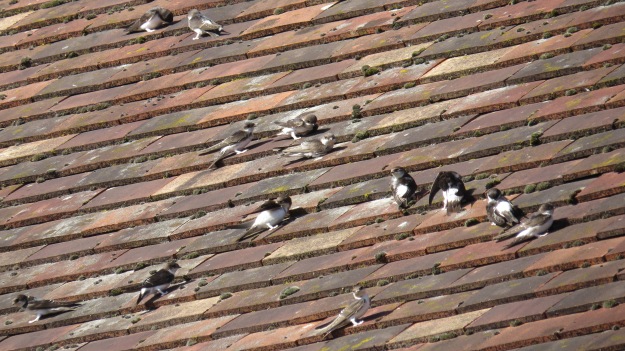 House Martins are among the first birds to arrive in the UK from sub-Saharan Africa, and the last to leave. On this late August day, they seem deeply conflicted. One minute they land on the red-tiled roofs at the end of the village, and preen energetically. The next they fly up in a great flurry, circle the roof and land again. They resemble nothing so much as a shoal of little fishes, darting this way and that, directed by some imperative that is invisible to mere humans. The distinctive blue-black and white plumage of the adult birds reminds some people of orcas. 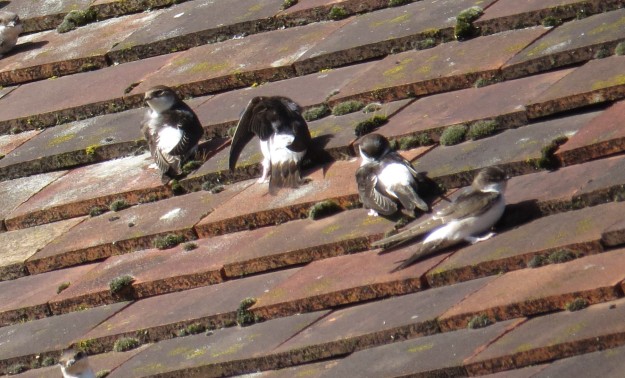 All the time, the House Martins call, a sound like a bagful of pebbles being shaken vigorously. This is an anxious time for them. For the newly fledged youngsters, it will be the first time that they’ve made their epic migratory journey. In a good year, House Martins will have two or three broods, and all those fledglings will accompany their parents on the trip south. What triggers this journey is probably a combination of the shortening day-length, falling temperatures and the decline in insect numbers. This last is vital: House Martins feed only on insects, catching them in mid-air. Without these birds, and others like them, our mosquito and midge problem would be much worse than it is. 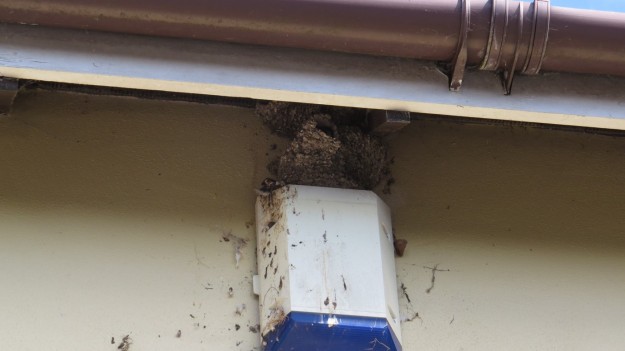 Not everyone is delighted to have House Martins or Swallows or Swifts nesting under their eaves. The birds can be messy and noisy for the few months that they are rearing their young. Most people tolerate the inconvenience for the delight of seeing the birds soaring and barrel-rolling over their houses, and for the joy of their return every spring, for these birds are intensely faithful to their nest sites, and will re-use a nest if they can, patching it up with mud  if it’s been damaged by the winter weather. But for some people it’s a nuisance too far, and the nests are destroyed, or wire is used to deter the birds on their return. I can only imagine the confusion when, having braved desert, mountain, ocean and conurbation, the birds arrive at their destination only to find that their nest, lovingly built with over 1000 beakfuls of mud,  no longer exists. House Martins have declined significantly in the UK in the past few years, enough for the RSPB to put them on their Amber list of conservation concern. This may be down, in part, to the lack of suitable nest sites, as new houses and farm buildings often lack the overhanging eaves that are essential to create the nest. I’m sure that our addiction to pesticides will also not be helping with the food supply. 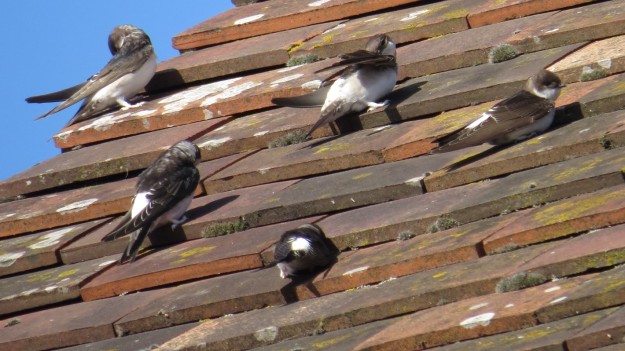 We know very little of what happens to House Martins once they reach their wintering grounds – of the 290,000 birds ringed in Britain and Ireland, only one has been recovered south of the Sahara. In fact, there is a theory that the birds spend the winter in the air, eating insects, and only come to earth in uninhabited forest regions to roost. This is not as unlikely as it sounds: while the breeding population of House Martins spends the hours of darkness on the nest, unmated birds are thought to roost on the wing at elevations of over 3300 feet. But wherever they go, there is a certain sadness in their leaving. By the time I left my parents to come back to London, most of the House Martins had gone. This is all to the good, of course – any bird that stayed in the UK would undoubtedly die of starvation.  We must make peace with their going, because we know that it is what they need to do. And, as in so much of life, the letting go is all. 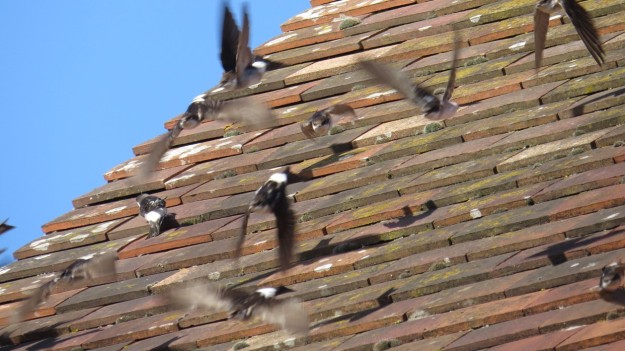 Resources this week included Mark Cocker’s Birds Britannica, a wonderful guide to both the  facts and folklore of British birds.

3 thoughts on “The Little Orcas”