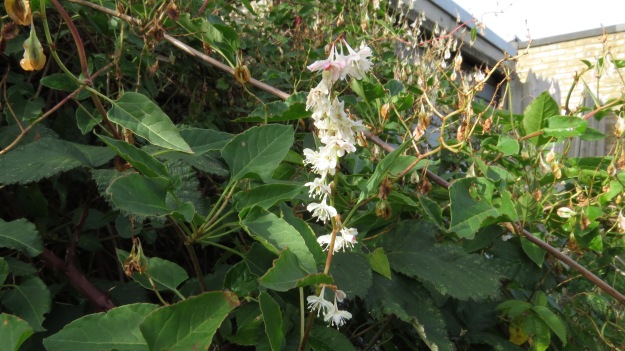 Dear Readers, I have noticed that when a plant wants to be featured in the Wednesday Weed, it makes its presence felt everywhere, and so it has been with Russian Vine. I first noticed it during my stumbling walk around the fields of Milborne St Andrew a few weeks ago, where it had grown over a fence and was intent on blocking the footpath.

Then, on my journeys back and forth from Surrey (where I am currently ensconced in Sutton Holiday Inn for four nights a week), I peered blearily through the window and realised that the trackside was a tumult of white flowers, tumbling over the back-gardens of Purley and Croydon like a foam-flecked wave. And, finally, when I took a walk along the unadopted road close to my house in East Finchley today, there it was again. I relented. This is a plant that wants its story told, for sure.

What we have here is a garden plant, originally from Asia, and known by such wonderful alternative names as Bukhara Fleeceflower and Chinese Fleecevine. However, most people will be familiar with it as Mile-a-minute plant. Many a gardener has planted one, gone indoors to make a cup of tea and come back to discover that it has taken over the shed and half of the children’s trampoline next door. Its flowers are a source of nectar for pollinators, but it has also been compared to the dreaded Leylandii Cypress for its over-enthusiastic and invasive nature. However, I am reminded that a ‘weed’ is simply a plant in the ‘wrong’ place, and so, while it can be a pain in a small garden, I would rather see Russian Vine along the edge of a railway line than the mass of wire fencing and fly-tipped building materials that it is probably covering.

Russian vine was first introduced to the UK in 1894, and was first discovered ‘in the wild’ in 1936. However, it has been pointed out that the plant is rarely found far from habitation, and that many of these ‘wild’ plants might actually be rooted in gardens, albeit gardens that are ten metres away.

Some of you might be thinking that you’ve heard the genus name Fallopia before in this blog, and indeed you have. Russian Vine is a relative of Japanese Knotweed and can interbreed with it. In the latest book in the superb New Naturalist series, ‘Alien Plants’, by Clive Stace and Michael Crawley, there is a very interesting discussion about how Japanese Knotweed has spread in the UK. In theory, because only female plants are present in this country, the plant shouldn’t be able to reproduce but, of course, it does. It has been found that Japanese Knotweed can hybridise with other species of Knotweed, and also with Russian Vine. Although these latter hybrids (named Fallopia x conollyana in honour of the botanist Ann Conolly who first investigated the genetics of this group) find it difficult to establish themselves, there are now three localities in which they exist, and one was first discoved in Haringey, not far from where I live, in 1987. In Flora Britannica, Richard Mabey reports that the hybrid is:

..’more elegant and less aggressive than either of its parents and has leaves shapely enough to make it a serious contender as a garden scrambler or ground-cover plant in the future. In the warm summer of 1993 it was being visited by many different species of native insect’.

Let us be grateful that this new plant seems to be taking on the gentler characteristics of its parents. If it combined the climbing ability of Russian Vine with the truculence of Japanese Knotweed we might have a candidate for a star part in a remake of The Triffids. 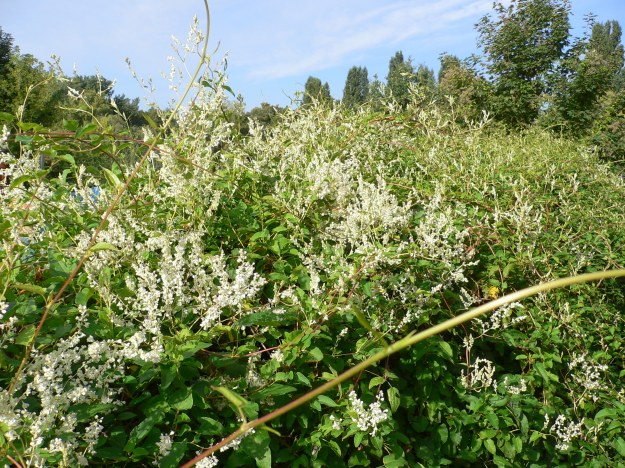 All other photographs are copyright Vivienne Palmer