Dear Readers, when I was in Cherry Tree Wood last week I made a point of popping by to visit an old friend, the Wild Service Tree that grows next to the cafe. It is so easy to overlook trees, for all their size,  and indeed I would have walked right past this if it hadn’t been pointed out to me by Brenna Boyle of Wild Capital when we were on a wildlife walk (an experience that I can heartily recommend if you want to learn about London’s plants and animals). But once identified, a Wild Service Tree  is very distinctive, with its extraordinary criss-cross bark. This one also bears a little red triangular badge, which shows that it is under a Tree Preservation Order, and so should be protected from the worst excesses of over-enthusiastic council tree surgeons. 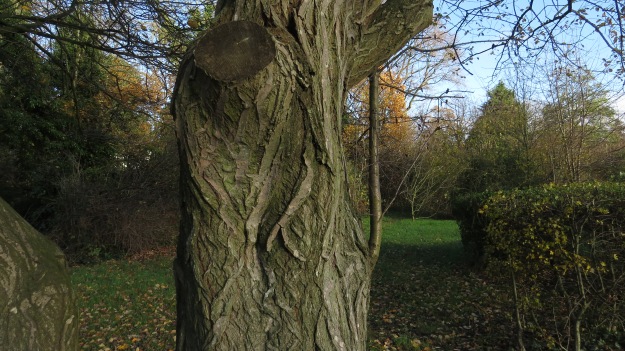 Never common, these trees are seen as being an indicator of ancient woodland, because they rarely disperse far from their parent tree – in his magisterial book ‘Woodlands’, Oliver Rackham describes the problem. The fruits (of which more below) are probably designed to be dispersed by birds, but for hundreds of years either the wrong birds have eaten them, or the seeds are not carried away. Rackham speculates that maybe the tree co-evolved with a bird that is no longer resident in the UK, or is extinct. So, when you see a Wild Service Tree, you can be fairly happy that it’s a relative of a tree that grew very nearby.

As Cherry Tree Wood was once part of the Bishop of London’s hunting grounds (as was Coldfall Wood) it is a reminder that this spot has not always had tennis courts, a children’s playground and regularly-graffitied public toilets. The Mutton Brook is said to arise somewhere in the wood (behind the aforementioned public toilets judging by the iris-covered bog behind them), and once upon a time deer and boar were killed amongst the oaks and the hornbeams. Maybe the ancestor of this tree was there when bugles were blown and hounds scuffled amongst the fallen leaves. 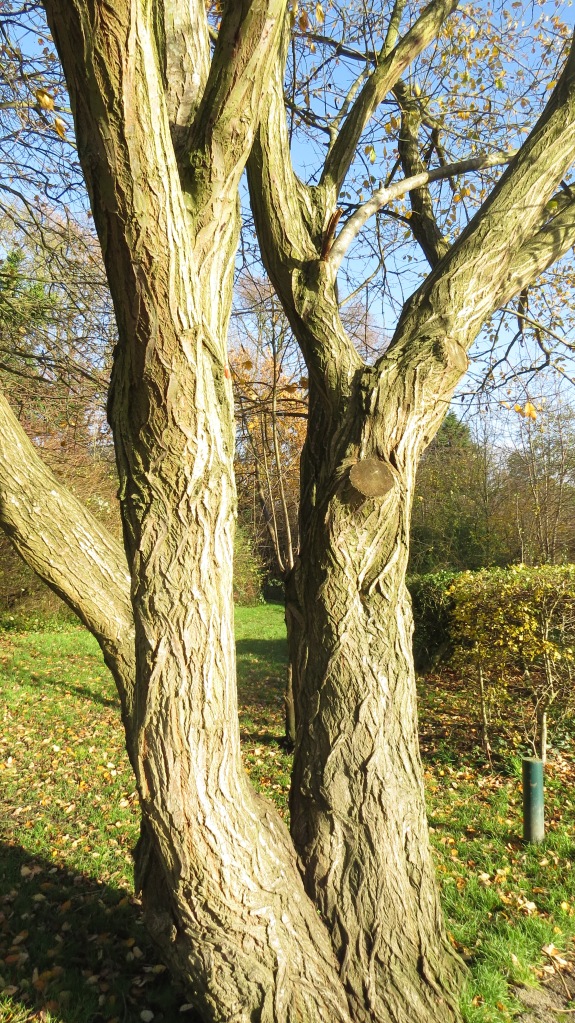 The Latin species name of the Wild Service Tree, torminalis, means ‘good for colic’, and the fruits, sometimes called ‘chequers’ were used as a remedy for this affliction. More to the point, though, the fruit was used to flavour a ratafia (another new word). This is a drink made by marinating berries or fruit in some kind of spirit – think of cherry brandy or (my favourite) sloe gin. This may account for the number of English pubs called ‘The Chequers’, though some folk also think it might refer to the pattern on the bark. And there’s me thinking that these hostelries were named for an innocent board game.

The fruit of the Wild Service Tree – Photo credit below.

The fruit is said to be too astringent for today’s tastebuds, and is described as only being edible when over-ripe and allowed to become almost rotten, a process known as bletting. This is also used with wild fruits such as medlars and rowan berries. In Flora Britannica, Richard Mabey describes the taste of Wild Service berries as being:

‘…not quite like anything else that grows wild in this country, with hints of apricot, sultana, overripe damson and tamarind, and a lightly gritty texture’.

Actually, that sounds like a perfect fruit for a Christmas pudding to me. I wonder if anyone has ever tried it?

Unfortunately, summers in the UK are rarely warm enough for the Wild Service Tree to produce much fruit, and it tends to reproduce by suckers instead. However, there are exceptions: Richard Mabey describes a tree at Parsonage Farm, Udimore, in East Sussex, which has a 13-foot girth and in a good year bears two tons of berries. 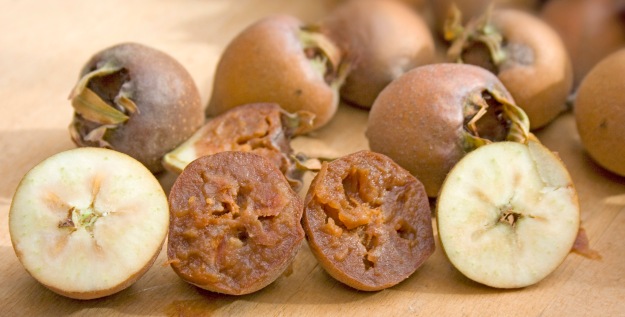 Some bletted medlars – photo credit below.

The leaves of a Wild Service Tree resemble those of a maple, though they also look to me like inverted angels.

In spring, the tree produces flowers which look very similar to those of my garden Whitebeam (not surprising, as they are closely related)

Why, though, is this tree called the Wild Service Tree? There are a number of possibilities. One is that the word Service is a corruption of the Roman word for beer, cerevisia (which will be recognised by anyone who has ever asked for ‘dos cervesas por favor’ in a Spanish bar), and that the berries were used to flavour this beverage. Richard Mabey thinks not, however, and disputes that there is any link between this plant and beer. He believes that the word Service relates to the Old English word Syfre. And, to my delight, I discover that there is an Old English- Modern English translation site on the internet, so I put in the word Syfre. And here’s what it says:

What a perfect description of this tree as it stands quietly alone, bedecked with white flowers or golden leaves. It seems like a serious tree to me, one not given to frivolity or nonsense, for all that its fruit has probably engendered such behaviour in generations of drinkers. I love that it is growing next to the footpath here, sinking its roots into the London clay that it prefers to all other soils. There are reminders of the history that we share with plants and animals everywhere we go. 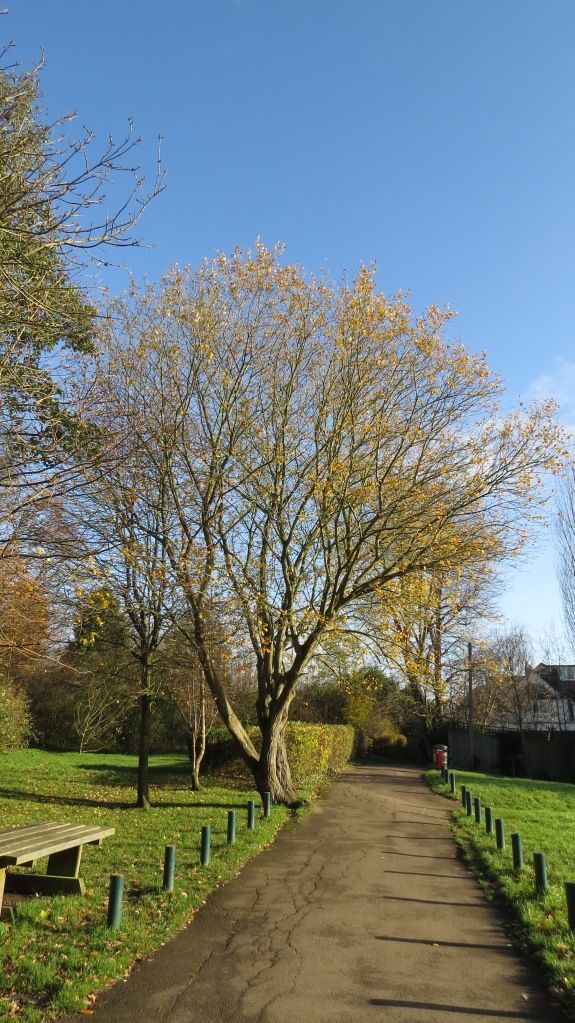 All other photographs copyright Vivienne Palmer

5 thoughts on “The Wild Service Tree”