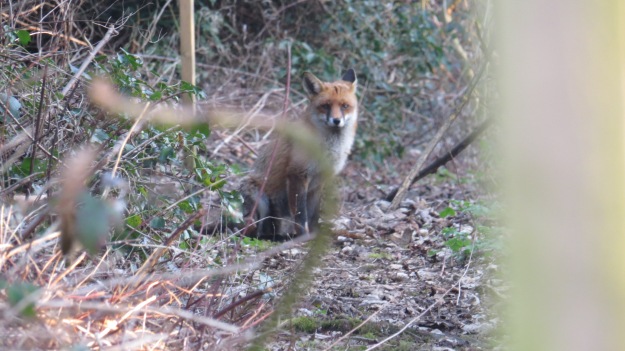 Dear Readers, every day for the past fortnight I’ve been visiting St Pancras and Islington Cemetery in an act of faith. I’ve been carrying a jam sandwich laced with a homeopathic  remedy, in an attempt to try to help a poor mange-ridden fox that I spotted a few weeks ago. And it appears that someone, at least, has been enjoying the unexpected sweet treat, because when I arrived on Tuesday I heard a scuffle, and saw a fox run, turn, and sit. I crouched down and managed to get a few photos, but it was clear, sadly, that this was not ‘my’ fox. 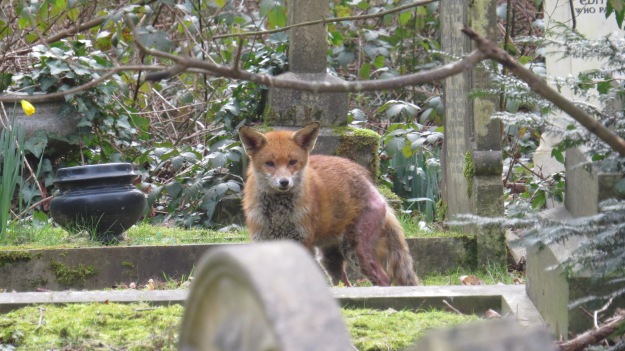 The fox with mange

I hadn’t realised how individual the faces of foxes were, but one look at the two animals above and it’s clear that they are as different as those of two humans.

I showed the fox my plastic bag full of jam sandwich, and walked very slowly to the mossy, primrose-covered mound where I always put the food down. The new fox melted away into the undergrowth, but by the time I got back to the road and turned, s/he was already back.   The low sun lit up the animal’s fur, turning it into copper and frost. For a few seconds, we were both transfixed. Then the fox gathered up the whole sandwich (which was cut into twelve pieces) and disappeared. 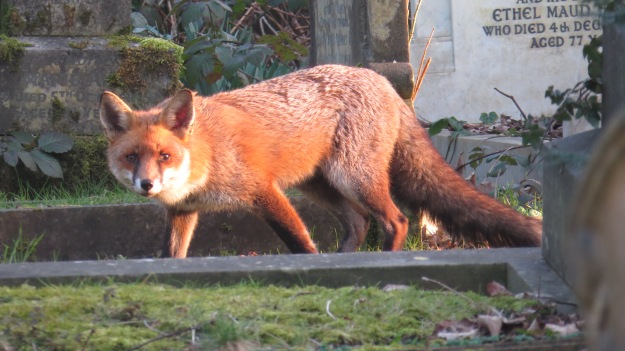 So, it seems that it is at least a fox that is taking the food (rather than crows, magpies and woodpigeons) but  I have no way of knowing if ‘my’ fox ever manages to get it. I have a fantasy that ‘my’ fox is a vixen who is being fed by this fox, but it’s very unlikely. I’ve been reading up about mange, and it appears that often it’s the less dominant animals, who are already more stressed, who are most affected by the disease. I’m hoping that if I go to the cemetery regularly I may learn more about the habits of the individual animals, and maybe I’ll be able to target my ‘offerings’ more effectively. Plus, I have allies!

As I was walking back through the cemetery, the Dog Patrol vehicle drew up alongside me.

‘Madam’, said the driver, ‘I have two questions. Firstly, may I ask what you’re taking photos of?’

‘Oh, the birds and plants and the occasional fox’, I said. ‘I know you’re not allowed to take photos of the graves’.

This is a bye-law, and I think it makes sense for more recent graves – no one wants their personal sorrow plastered all over someone’s blog. I’m not sure about those that are covered in ivy and long -neglected, but there you go.

‘Great!’ he said, ‘So, can I ask you what camera you recommend, because I want to take some photos of the wildlife meself’.

And so we had a long discussion on the merits of Canon vs Nikon, and the Dog Patrol man told me of some very unusual occasional visitors to the cemetery, which I hope to be able to share with you as soon as they cooperate. He also told me about some of the places where the foxes ‘hang out’, so I may be able to spot ‘my’ fox at some point in the future.

However, it is not all good news in East Finchley. I got a message from one of the Friends of Coldfall Wood that something was amiss with the stream. I grabbed my camera and headed down, to find that the water of the stream was an unpleasant blue-green colour, something that reminded me of my experiments with copper sulphate when I was doing my chemistry O-level many decades ago. 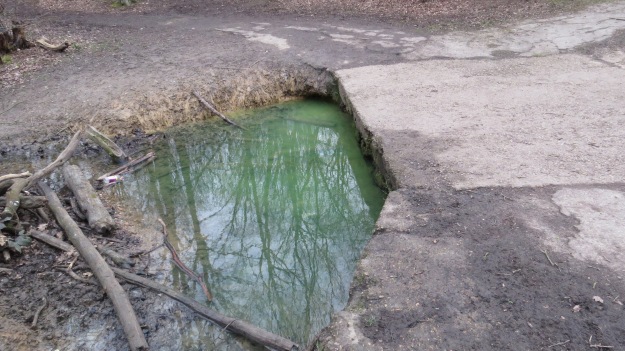 The local council has been informed, but at the moment we have no way of knowing what is causing the discoloration. . Much of the water coming into the stream runs off from the roads in the area, and it collects pollutants from many different places, which is one reason why a reed-bed was planted – the species used, Phragmites australis, helps to filter out unwanted nutrients and chemicals in the water. Generally the water runs clear, so I hope we can get to the bottom of what’s happening.

It seems that I am having to learn many lessons about what I can and can’t control at the moment. Something is still murdering frogs in my garden, and yet, if I hadn’t built a pond, there wouldn’t be any frogs, or tadpoles, at all. The ‘wrong’ fox is eating at least some of my jam sandwiches. And now, someone has polluted the river in ‘my’ wood. I could spend my entire life in a state of high dudgeon and heightened blood pressure. But instead, I shall try to grow some more early-spring cover so it isn’t so easy for predators to pick off my frogs. I shall carry on with the jam sandwiches, but try to find out if there’s a more intelligent way to distribute them. And I shall work with my pals at Friends of Coldfall Wood to see what we can do about the pollution issue.

And in the meantime, I shall keep my eyes open for the moments of beauty that are all around me, every day, if I only pay attention. 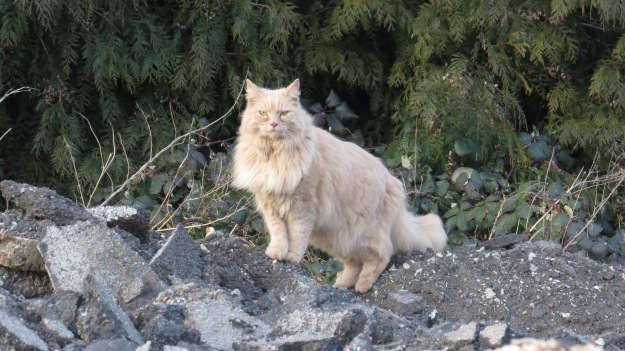 A crow outside my office window