Dear Readers, what a pleasure it is to see the blackthorn in full flower. The English name of the plant describes it well for anyone uncertain what it looks like – the twigs and branches are black or dark grey, and the plant has thorny side shoots. Each of the flowers has many long, elegant stamens which give the blossom a speckled appearance. Such a mass of flowers is a boon for early insects of all kinds, from hoverflies to honeybees. In some traditions, the signal for the start of Imbolc, the time of Celtic  spring rituals, was the blooming of the blackthorn.

I must confess to a personal attachment to this plant. In its other incarnation as the sloe, blackthorn forms the basis of one of my favourite tipples, sloe gin. My father worked for many years as a distiller for Gordon’s Gin. In those days, the recipe for the gin was a closely guarded secret (the details were held in a locked safe), and only a few people knew how to make up the concentrated flavour that would be used to create the spirit. As a result my father, who left school at fourteen, ended up flying all over the world, working in distilleries in Spain, Jamaica, and in the middle of a jungle in Venezuela. He had many adventures, including being confined to quarters during a State of Emergency in Jamaica, being knocked over by an earthquake in Venezuela, and flying first class with Peter Wyngarde, the diminutive mahogany-toned star of the TV show Jason King. I credit my dad with imbuing me with a love of travel, and the belief that it was possible to  have an interesting and fulfilling life regardless of where you start. 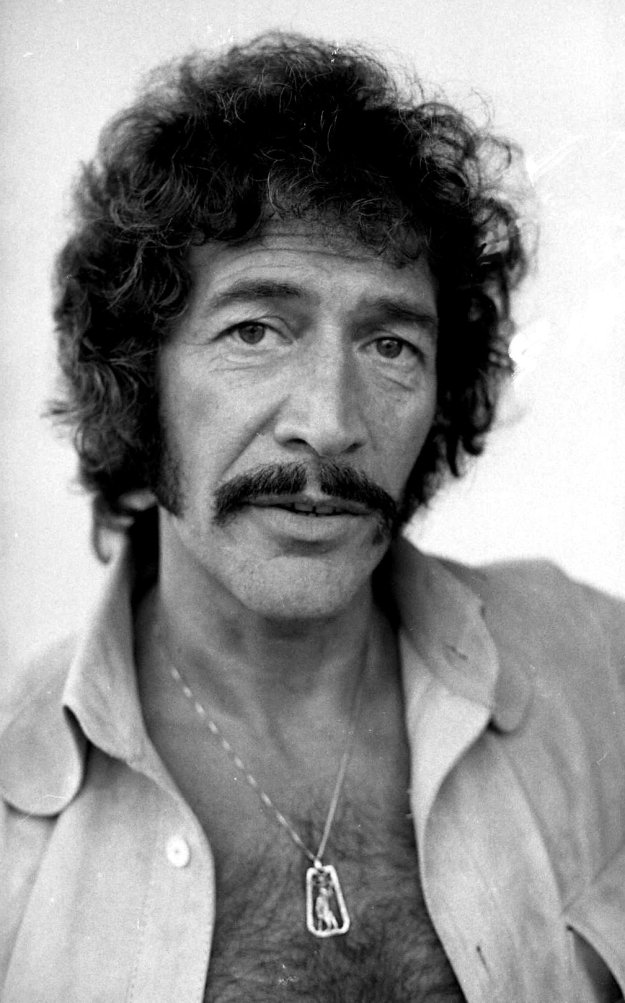 Peter Wyngarde (Photo One – credit below)

And what has all this to do with blackthorn, I hear you plead? Well, Gordons made a limited number of bottles of sloe gin, which, heavily diluted with lemonade, was one of my first introductions to the delights of alcohol. I still love a glass at Christmas today (though minus the lemonade). It is possible to make the drink at home, though the process involves gathering basketfuls of the astringent purple-blue fruits, and individually pricking every one to allow the juices to colour and flavour the gin that you pour all over them. At Gordon’s, they had a special machine for pricking the sloes, which I believe were harvested in Scotland. And a very fine drink it was too.

The juice from the berries has also been used as a dye – apparently it initially turns cloth a reddish colour, but after several washings this turns to a permanent pale blue. 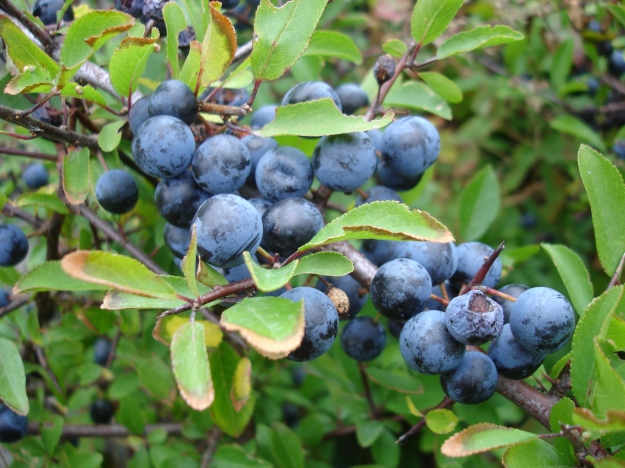 Humans are not the only creatures with a taste for blackthorn, however. It is a recommended source of food for the caterpillars of the rare Black and Brown Hairstreak butterflies, as well as numerous moths. 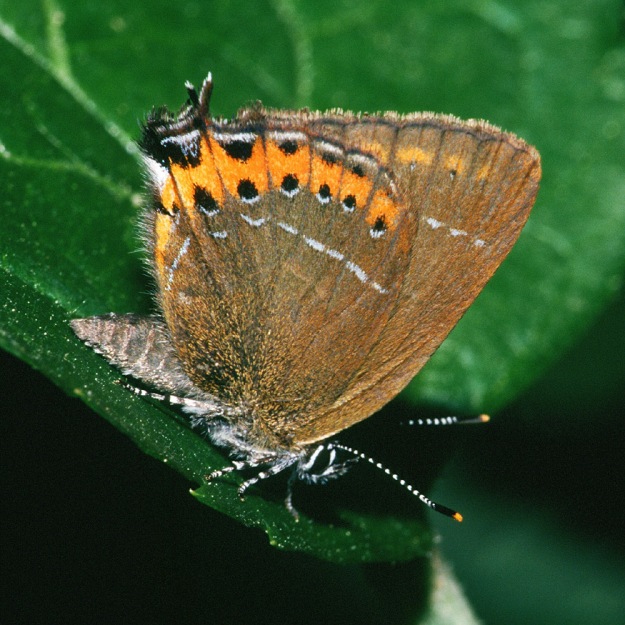 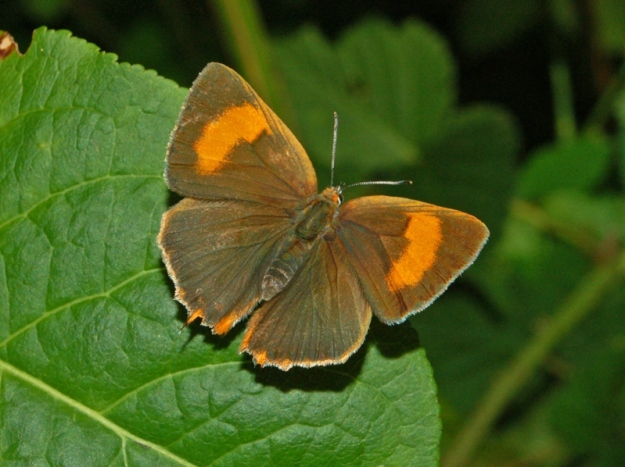 The eggs of the brown hairstreak are laid directly onto the stems of the blackthorn, and it’s well worth having a look to see if you can see any next time you are passing by a bush. They are quite distinctive, though at a distance you might mistake them for lichen, or bird droppings. Once the caterpillars emerge, they are extremely well camouflaged and feed only at night.

And for your delectation, here are some of the other insects whose larvae may be found feeding on blackthorn: 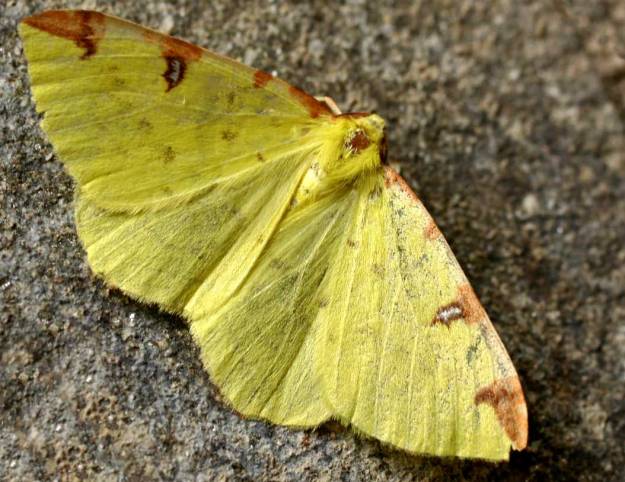 As so many creatures depend upon it, it is a good thing that blackthorn has been used as a cattle-proof hedge since at least medieval times. In Flora Britannica, Richard Mabey describes how crossing the blackthorn with the cultivated plum tree can produce ‘thorns more than two inches long and tough enough to penetrate a tractor tyre’, so I can well see how even the most ambitious cow would admit defeat.

The wood is described by Cobbett as being ‘precisely the colour of the Horse Chestnut fruit and, as smooth and bright, needs no polish’. Blackthorn wood has been used as a material for walking sticks, and was traditionally the wood used for Irish shillelaghs (clubs), because it was less prone to cracking than other materials. The wood was seasoned with lard and put up a chimney to season, which gave it its black colour. The normal weight of the stick was about two pounds, but a ‘seasoned club’ had the hitting end filled with molten lead. You would not want to attempt to mug someone carrying one of these sticks, for sure.

Although it was a rather mild day when I spotted the blackthorn in blossom at the weekend, it is said that the plant may come into flower during a period of bitter winds following a ‘false spring’ – a ‘blackthorn winter’. As with many plants that bear berries, plentiful fruit was also believed to be indicative of a harsh winter to come:

‘many sloes, many cold toes’

The bark has been used as an intestinal tonic, and also for tanning – it turns leather a reddish-brown colour. It seems that this plant, which shares such a long history with us, has been useful to us at every turn.

I like to try to find some artistic or poetic reference to my Wednesday Weed, and this week I have found this portrait by the Pre-Raphaelite Marie Spartali Stillman, arguably the greatest woman artist of the movement. The painting shows the Madonna Pietra degli Scrovigni, a character from Dante’s poetry, and she is described as ‘a heartless lady dressed in green’. She is holding a branch of blackthorn, and I wonder what it symbolises: her wintery coldness, her thorny nature, or even her purity? Her enigmatic gaze is giving nothing away. I love that the painting features not only the blackthorn, but that the flowers in the Madonna’s hair are hellebores, and that ivy twines amongst the dried oak leaves above her head. 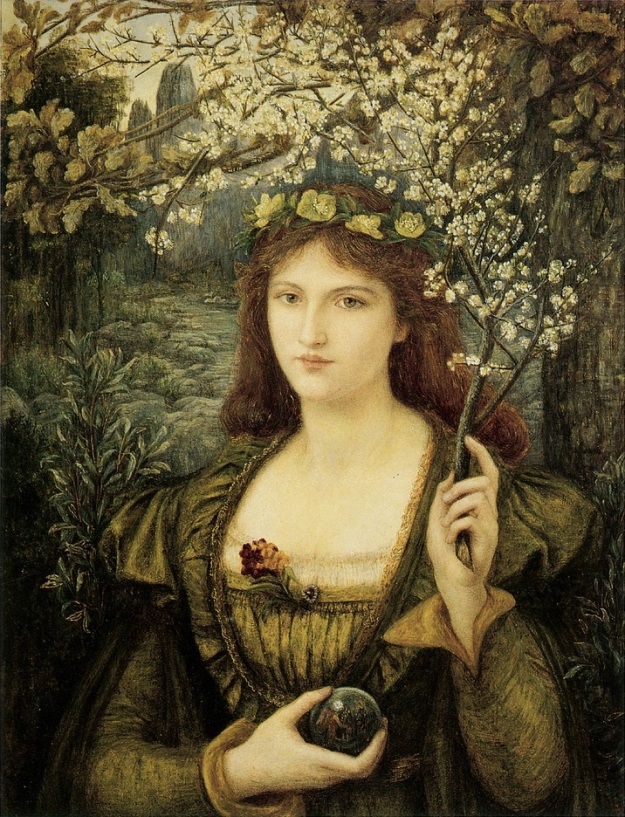 Spartali Stillman lived in England for her whole life, first in Clapham and then on the Isle of Wight. She studied under Ford Madox Brown (who is buried in ‘my’ cemetery) and was a model for Dante Gabriel Rossetti, Julia Margaret Cameron and Burne-Jones, amongst others. She also had an extensive sixty year career of her own, which included major exhibitions in both the UK and the US. Yet I had never heard of her. It seems that, as so often, a woman’s work is buried in obscurity while her male compatriots are famous names. I am  fortunate to live in an age where such works can be discovered with a simple internet search, uncovering a whole world of beauty that I can share here. It is easy to criticise the web, and yet it enables us to make connections that I cannot imagine would have been so easily made any other way. Who knew that a post on blackthorn would take me so far?