Dear Readers, when I feel as if I will scream if I hear one more political pundit pontificating on Radio Four,  I take myself outside for a walk. I know that if I concentrate on the sights, sounds and smells around me, it will take me out of my head and into the real world that surrounds me and which knows nothing of leadership challenges or Article 50. So, yesterday I decided to do a one hour loop around East Finchley, from my front door via Coldfall Wood and St Pancras and Islington cemetery. And, if you need a break from this bonkers time, you’re welcome to come with me!

I have some very over-grown lavender in my front garden. In the interests of neatness, I should probably replace it, but at this time of year it is covered with bees. I spotted an ashy mining bee (photo above), and the usual congregation of honey bees. The ashy mining bee likes to nest in short turf or bare soil, and, according to my field guide, can form ‘dense aggregates of nests’. I would love to know where they are nesting – I remember that mining bees moved into my garden before it was fully planted up, and I loved the watch them coming and going from the tunnels that they dug in the loose earth. 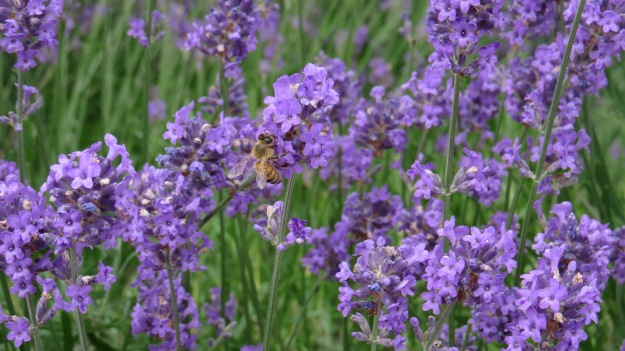 The rosemary beetles are getting stuck in, too. They look like drops of mercury spattered onto the flowers. With their green and red-striped wingcovers, these beetles are fairly common in the south east but are spreading north as our winters warm up. They like lavender and thyme as well as rosemary, but I can’t see that their larvae have done any significant damage in my garden. 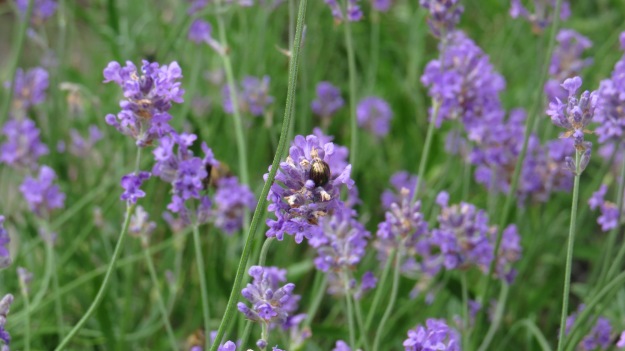 As I head up the road, I pass a huge hebe plant which is in bloom for most of the year, and which is a source of nectar for dozens of bumblebees, and an occasional hoverfly. 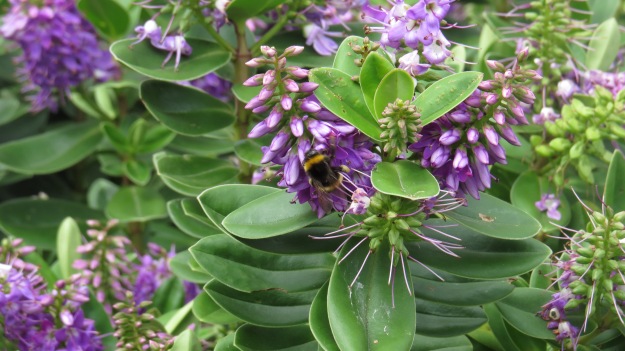 I pass my friend A’s house, where I notice that the opium poppy seedheads look like some kind of plaster vessels.

As I walk through the litter-strewn alley, the smell of fresh dog poo (yes, madam, I did see you pick up pace and scurry away) is offset by the scent coming from the jasmine that is pouring over the fence like sea foam. 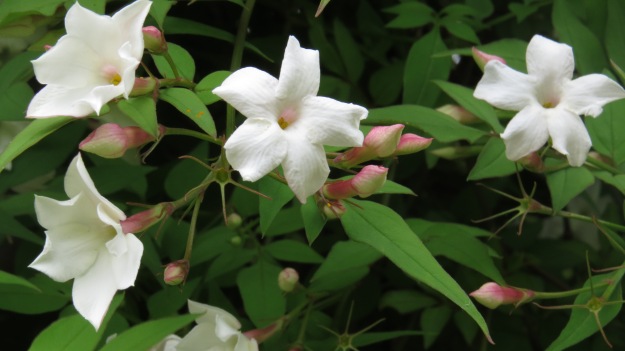 And so, we come into Coldfall Wood. 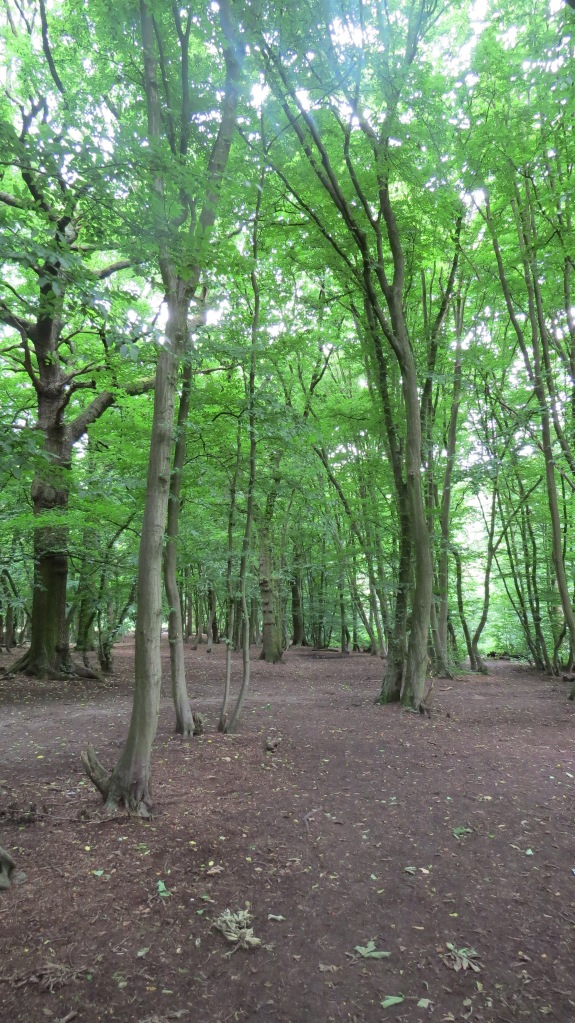 I walk along by the stream, and help myself to some wild raspberries, as sweet as any I’ve ever tasted. Some wild angelica is coming to an end, and the seed heads look like a mass of green pompoms, most unlike the flat ‘platform’ flowers of cow parsley or hogweed.

The path is muddy and overgrown here, and the plants are, as usual, a strange and varied bunch. The flowers of Himalayan honeysuckle (also known as Flowering Nutmeg) look fleshy and faintly obscene. The flavour of the berries, however, is described as a delicious combination of chocolate, caramel and dried fig, and on my new favourite blog Fergus the Forager, there is a recipe for fig rolls using the fruit of this plant. The ingenuity of human beings never ceases to cheer me up.

What is a cause for great celebration is that the decaying and vandalised bridges over the stream have been repaired with some fine new ones. Let’s hope they last longer than the old ones did.

Close to the bridge is a stand of tutsan, a most exotic-looking member of the St John’s wort family that is, in fact, a native plant. I love the rosy glow on the berries – each one looks like a miniature apple. 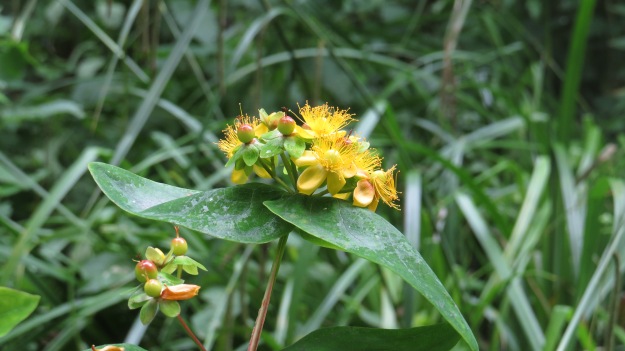 I cross the bridge, and turn onto the playing fields. In a patch that was dug up for drainage last year, I see that there are several fine common mallow plants in full bloom, and a plant with sinuous flower heads that remind me in shape of cats’ tails. When I get home, I check it out and find that it’s weld, a plant that certainly wasn’t here last year. Was it part of the seed used for re-planting, or has it just blown in? Who can say. At any rate, the insects are appreciating it. 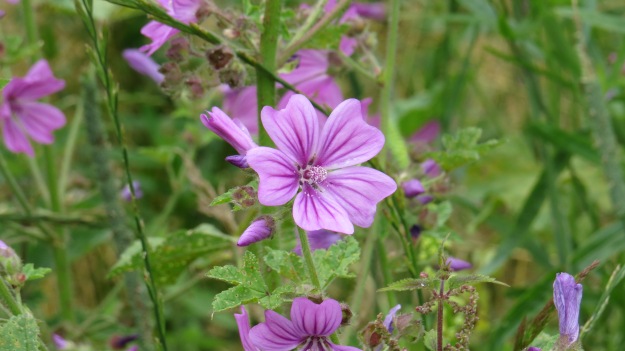 And now, finally, I turn left into the cemetery. I haven’t been able to get here for the past few days, but my friend B has continued to feed the foxes. I’ve missed them – I am always curious about what they’re getting up to, and how they are doing. So I creep along the track where we put out the food, and see that one of the foxes is already getting stuck into a raw chicken leg.

I don’t think Mr Magpie is going to get any of this lot.

If I position myself carefully and quietly, I can get a few shots of the foxes as they go to and from the feeding site, without disturbing their actual feeding. I am sure that there are more foxes here, and I suspect that they all form an extended family – they are certainly very tolerant of one another. I wonder if the animals in the pictures below are actually well-grown adolescent cubs? After all, they’d be about four months old by now. 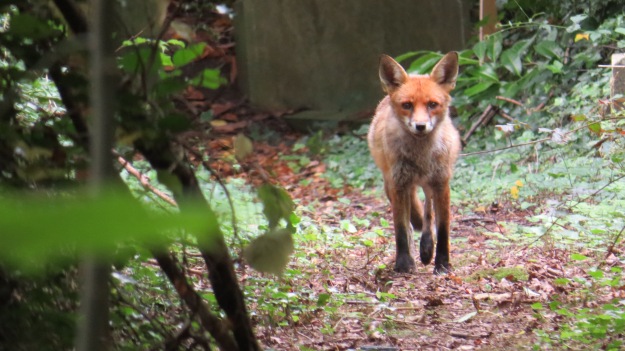 As I loop back up the entrance of the cemetery, I pass a plant which is called, fittingly, fox-and-cubs.

There is something about walking consciously, about paying attention to the smells and sounds and sights around us, that is truly liberating. For an hour I haven’t been on that hamster-wheel in my head, turning relentless circles of what-ifs and buts. Being comfortable with uncertainty is a trick that a lot of us are going to have to learn I think, if we are not to be driven to anxiety and depression by what is going on in the world. And so I would like to leave you with this blackbird, singing his heart out against the traffic, fine and fierce and defiant. This is still a beautiful world.

Dear Readers, Bugwoman is off for her annual holiday in Obergurgl, Austria today. Wednesday Weeds will continue as usual while she is away (by the magical process of preparing them beforehand), but the Saturday posts will include some Alpine vistas, some meadows and, with any luck, some Austrian creatures as well. See you there!

All photos are copyright Vivienne Palmer. Feel free to use, but please credit me, and link back to the blog, thank you!

2 thoughts on “Beating the Blues”