Dear Readers, while I was doing my walk around the County Roads last week, I spotted this strange plant growing at the base of the wall outside Kentucky Fried Chicken. I was immediately very puzzled. What on earth was it? I looked through my flower books, and decided that I needed some help to identify it. Within ten minutes of posting the photos on the Wild Flowers of Britain and Ireland Facebook page, someone had pointed out that it wasn’t a wild flower at all, but a liverwort. So, welcome to my first ever Wednesday Liverwort!

Liverworts have been around for much longer than flowering plants: fossil evidence dates back some 470 million years, and they were probably the first plants to colonise dry land. Unlike ‘normal’ plants, their tissues are not divided into roots, stems and leaves: instead there is a mass called a thallus. In star-headed liverwort, the top layer of the thallus, which is exposed to the sun,  is where the photosynthesis happens, and the lower level is used for storing the sugars that the plant needs to grow.

In the photo below, the thallus is the green leafy stuff, and this is what does the day-to-day work of the liverwort. However, I want to talk first about the strange sucker-like ‘cups’ that stud the thallus. 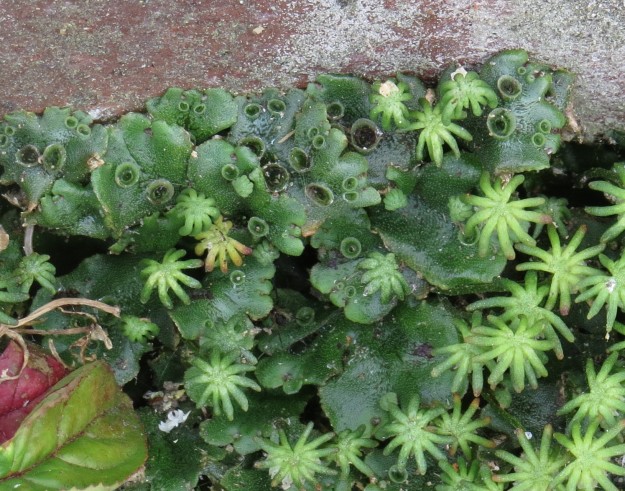 The thallus of the liverwort, and the ‘cup-shaped receptacles’

These ‘cup-shaped receptacles’ are called gemmae cups. These are used in asexual reproduction: each cup holds a mass of cells which, when detached from the parent plant, can form a whole new, genetically identical plant to the parent. These ‘gemmae’ are detached by rainfall (or, given their position at the foot of the wall, by dog or human urine I suspect).

But what about the ‘stars’?

The stars are the female sexual organs of the plant

Each of the ‘stars’ (called an archegonium) contains an egg cell, and is the female sexual organ of the plant. In star-headed liverwort, the individual plants are either male or female, so ‘she’ will be waiting for sperm from a male plant. In the photo below, you can see the male plants amongst the female plants – the sexual structures (or antheridia) are the flatter, more flower-like objects. The plants in this photo should be able to reproduce sexually, but, with no sign of male structures for my local plant, I fear it will be down to asexual reproduction if it wants to go forth and multiply. How handy, though, to have a back-up solution to the age-old problem of passing on your genes!

If you find yourself fascinated by the sex-life of star-headed liverwort, there is a fascinating blog by a biologist who is working with this species, and trying to discover what it is that made this species such an early coloniser of dry land. There are lots of photos, and even a film. Well worth a look.

So, liverworts have found a variety of solutions to the problem of reproduction, which may explain why they are so successful. There are few habitats that don’t have an array of these plants. Star-headed liverwort has three different subspecies, with the one that I found, sp. ruderalis, being predominantly found in man-made or disturbed habitats. It is said to be a serious ‘weed’ of pot plants, especially in nurseries,  but can also be found in the usual urban sites: cracks in the pavement, brickwork, footpaths etc.

It is a significant earlier coloniser of sites which have been burned, and in the US has been known to completely cover land after a forest fire, helping to minimise the effects of soil erosion. Furthermore, it only subsists for two to three years after the initial event, and has no effect on the subsequent growth of other plants. It seems to act as a kind of safety blanket, allowing the soil to recover and holding it together.

What a tough plant it is, and almost always unnoticed.

Why, though, are liverworts called liverworts? The thallus was thought to have the texture and shape of liver, and the Doctrine of Signatures (whereby the shape, smell or colour of a plant was thought to be a sign from God about what it could be used for) indicated that it would therefore be useful in the treatment of jaundice and other such conditions. The whole liverwort group are sometimes known as ‘hepatics’ for this reason. There is also a flowering plant called Hepatica (and rather pretty it is too) that was also used in the treatment of the liver because of its three-lobed leaves. 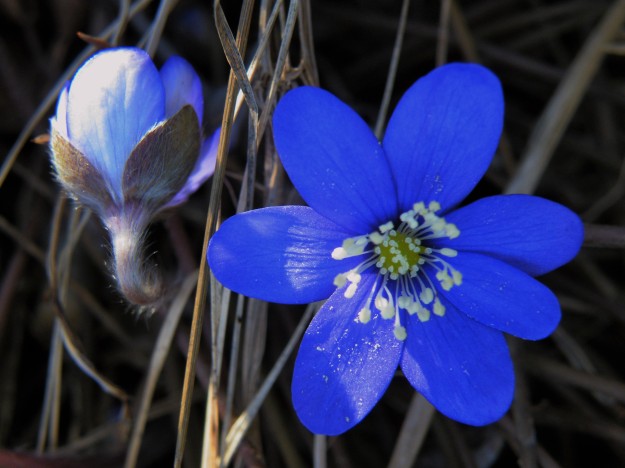 Hepatica nobilis. Definitely not a liverwort. (Photo Two – credit below)

So, I am a new convert to the liverwort appreciation society. The average ‘weed’ goes unnoticed amongst us, but these plants are even more discreet. And yet, they were one of the first green things that ever grew on the rocks of our barren land, and they have been doing this for longer than any other plant. If I had a hat, I would definitely doff it to the star-headed liverwort. It is indeed a star.

All other photos copyright Vivienne Palmer. Free to use and share non-commercially, but please attribute and link back to the blog, thank you!