Dear Readers, I visited St Pancras and Islington Cemetery during the week after Christmas, there seemed to have been an irruption of artificial poinsettia. It was the first choice of the many people who had come to visit the graves of their loved ones during this most poignant season of the year. And now, as the wind shook the bare branches and the sun shone down indifferently, the red ‘flowers’ added a somewhat incongruously festive air to the place.

Some of the artificial plants are pretty convincing, others less so. But it is interesting how this plant, originally from Mexico, has a long association with Christmas. A Mexican legend tells how a small girl called Pepita was too poor to bring a gift to the statue of the baby Jesus in her church. An angel appeared, and told her to gather weeds and place them at the altar. Beautiful scarlet flowers grew from these humble plants and turned into poinsettias. The star-shaped leaf clusters are said to symbolise the Star of Bethlehem, and the red colour is, of course, the blood of Christ. 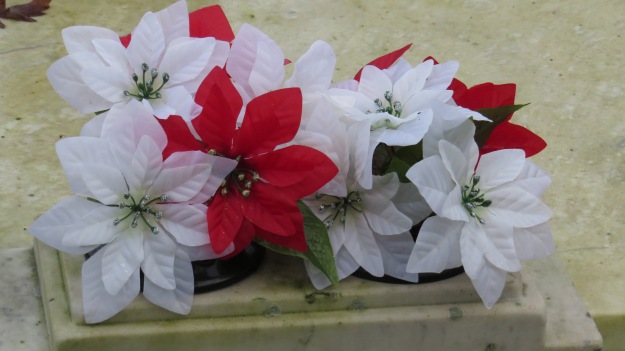 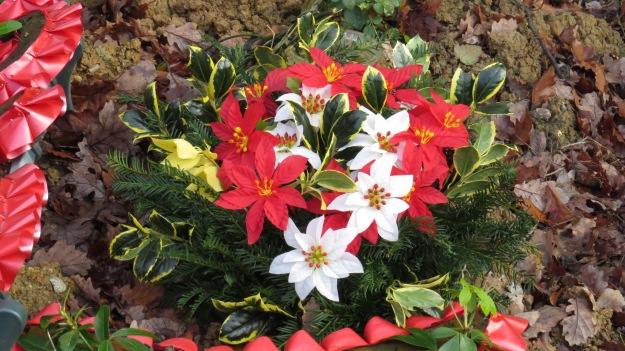 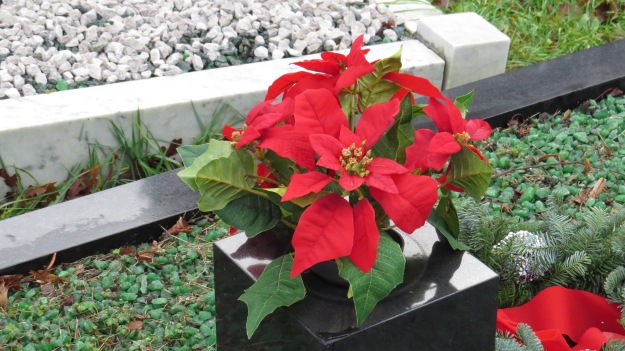 The red part of the poinsettia is not, as we know, the flower – the flower is the rather insignificant mass of tiny buds in the centre of the plant, imitated rather well in the photograph above, I think. The red ‘bits’ are modified leaves, called bracts. These days we can see white, pink and variegated versions of the plant, but I think I prefer the red ones, largely because I love it when the green leaves start to go red and the veins stand out scarlet against the emerald.

But among all the plastic flowers, there was some real life going on. Although January is the middle of winter for us humans, the starting gun has already sounded for many birds. The trees and bushes were full of robins singing, blackbirds chucking and great tits making a right old racket.

The width of the band of black on the chest of a great tit is related to testosterone levels, as is the black bib under the chin of a male house sparrow. The wider the band (or the bigger the bib) the more aggressive and dominant the bird is. A Spanish study showed that, in Spain, great tits with a wide black band do better in the forest (the bird’s natural habitat) whereas birds with a narrower band (indicating a more cautious attitude) do better in the cities. But things are rarely so simple. In the Spanish birds, the narrower band also seemed to be linked to a more curious and thorough temperament, surely an advantage when there are lots of novel opportunities to be investigated. I shall leave you to decide on the possible nature of the little chap above.

In the UK at this time of year there seem to be big gangs of young magpies about. There was a group of four or five in the cemetery while I was having my walk, and they were a noisy, rambunctious lot, harassing a pair of crows and then turning their attentions to terrifying some jays. I once watched a group of twenty in an Islington square as they forced some crows to abandon their nest. Fortunately, the crows hadn’t yet laid any eggs, and the magpies soon departed to annoy someone else. I imagine that this is pre-breeding behaviour, which will cease once everyone is paired up and has their own eggs to worry about.

One of the cemetery kestrels watched on serenely.

I first spotted this bird on top of a hawthorn bush. It has endless patience, making the occasional reconnaissance flight across the gravestones and then returning to sit and watch. I know that there are lots of small rodents here( after all, I watched a young fox eat a dead one back in the autumn) and the fact that the cemetery supports a pair of kestrels presumably means that they are fairly good at finding them. I always get a thrill when I see a kestrel; they may be small but they have the enigmatic nature of all predators, a kind of self-assurance that I find very moving. Don’t they know how wicked we have been to them, historically and currently?

Kestrels also eat small birds, and so the superabundance of berries and rose hips this year, which will attract thrushes and other small avians, will help too.

But by now I was getting cold, and even I had seen enough poinsettias for one day.

And so I turned for home, stopping only to wish a very under-dressed man clutching a can of beer a Happy New Year. He was shivering with cold, but strolled off briskly into a wooded area to finish his drink. The cemetery is a magnet for lost souls of all kinds, and my heart went out to him. When I worked in a night shelter in Dundee, Christmas was always the hardest time of year: so many of the people there had lost contact with their families. It was often hard to work out whether the families had gone because of the drink, or the drink had started because of the families. But whichever it was, it was a time of great distress and soul-searching and, often, remorse. No one is born to end up in a cemetery in a tattered shirt, with drink the only available solace.

But, to end on a more cheerful note, I circled round to see my favourite non-living creature in the cemetery, the Egyptian Cat. I’ve written about him or her before  but I wanted to see how s/he was looking during the festive season. And I was not disappointed. 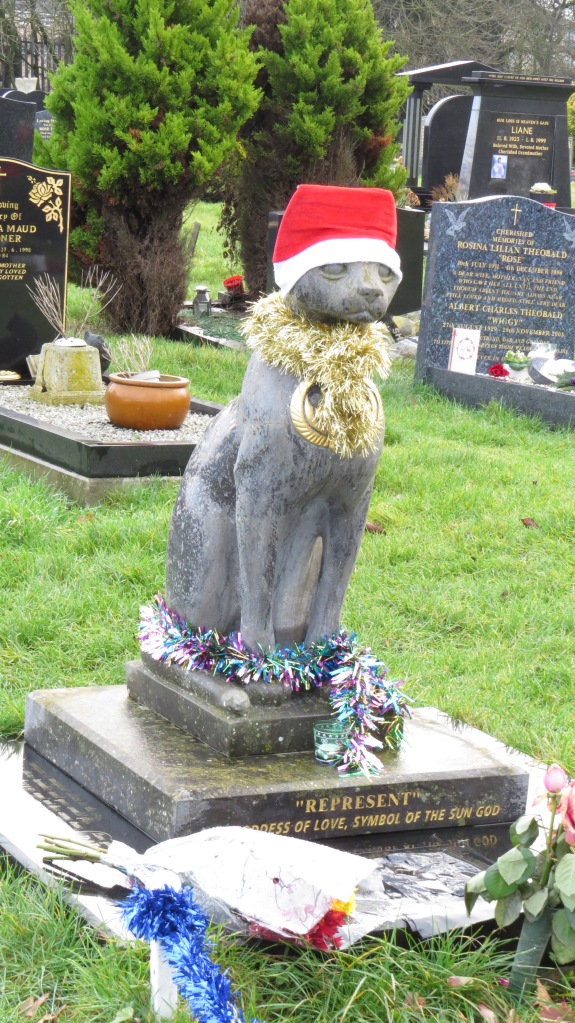 What a magnificent outfit! I am more in love than ever.

Now, some of you will, I’m sure, be wondering about the foxes. Truth is, I’ve not seen any for the past month or so: this is the season for young foxes to disperse, and for adults to turn their thoughts to sex. My friend B has been leaving out the medication, and all the food is being eaten, but the foxes can afford to wait until after dark to eat it, and we get booted out of the cemetery at four p.m. However, the days are getting longer, and I’ve no doubt that soon they’ll be putting in an appearance again. You will be the first to know, lovely readers!

9 thoughts on “After Christmas in the Cemetery”