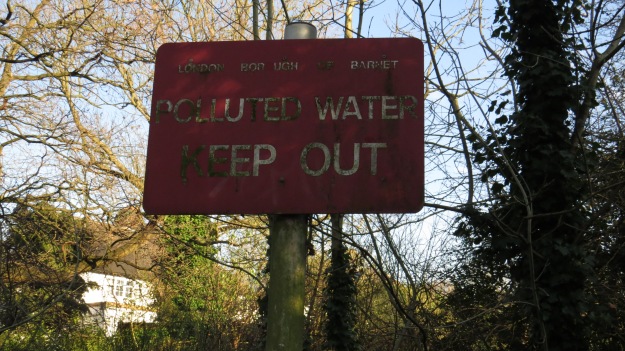 Dear Readers, last week I left you as I was just about to cross Falloden Way, a busy road that channels traffic through Hampstead Garden Suburb and onto the North Circular Road. For most of the route so far I’d been able to hear the robins singing and the sound of the brook, but for the next stretch it was all about the rumble of traffic. I was most disconcerted by the sign above: what was polluting the stream? Was it just the continual run-off from the road, with all the concomitant petrol spills and diesel oil, or something worse? I know that in Coldfall Wood a lot of the pollution was due to misconnections of household appliances such as washing machines, so I was pleased to see that the Brent Catchment Project are looking at such events along the Mutton Brook.  It also looked to me as if it was a spot where the river floods, at least by the sight of the decaying sandbags at one side of the bridge under the road, but if I want to check, I can look at the government’s Flood Information Service website here.

The river continues along this side of Falloden Way for a couple of hundred yards, and there is a path on the east bank so at least I didn’t need to walk alongside the traffic. But this is a rather unloved stretch of the stream, with broken-down fences and crumbling walls. 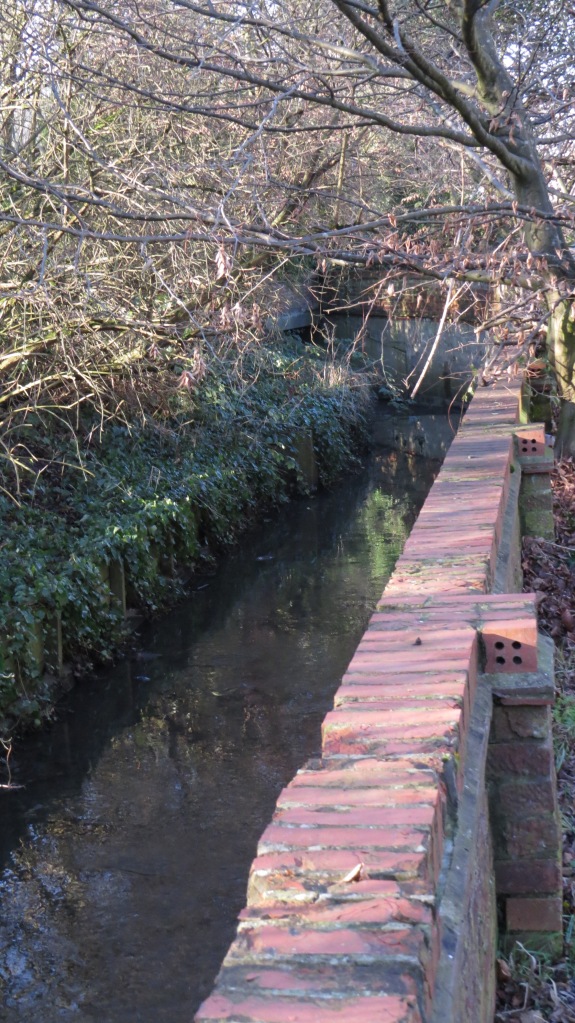 And then the stream heads back under the road, and I find that I have to retrace my steps back to where I originally crossed the road. Just as well that I am wearing my Fitbit, so all this extra activity at least counts for something. 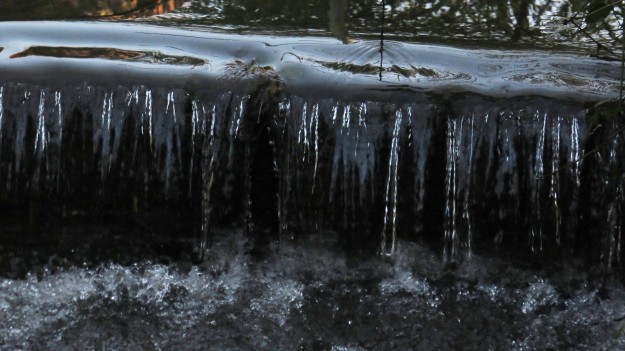 As I trudge along to rejoin the river, I am stopped in my tracks.

Someone has built a narrow garden full of all kinds of found objects and idiosyncratic delights.

I wonder if robins or blackbirds ever nest in the boots and beermugs? I must make a pilgrimage in the spring to find out. 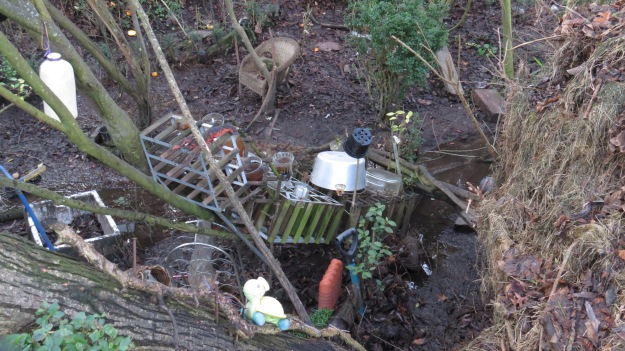 Every pot and pan has been placed with as much love as a bowerbird expends when he builds his bower. I would love to meet the gardener, I suspect that we would be kindred spirits. It was well worth crossing the road for. And as I walked on, I passed a magnificent squirrel who watched me with no concern at all. I half-expected him to ask me a riddle as I passed.

And then the river reappeared, and it seemed to have a touch of joie de vivre about it. Maybe it was glad to have some land between it and the road again, for it travels inland here. 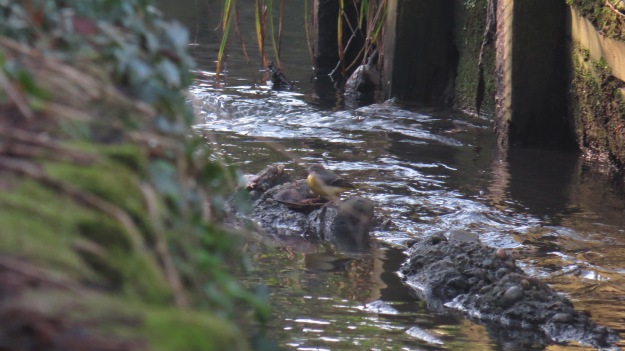 And who is that standing on a rock in the middle of the stream but a grey wagtail, husbanding his stretch of the waterway. I had briefly spotted one in the earlier part of the walk, but this one stayed around long enough for me to get a couple of (inadequate) photographs. I love the sulphur-yellow undersides of these winter visitors to our brooks and rivulets. 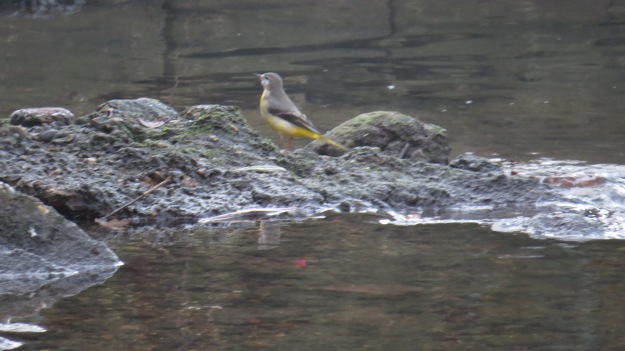 It is still very cold. There are places (rather like my back garden) that the sun never touches, and which still crunch underfoot in the afternoon. You can see exactly where the warm spots are just by looking at where the frost still sits. 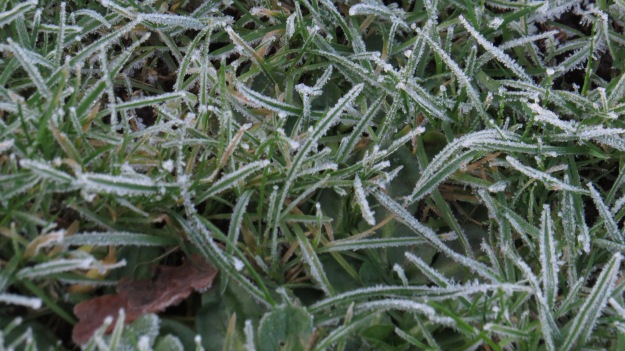 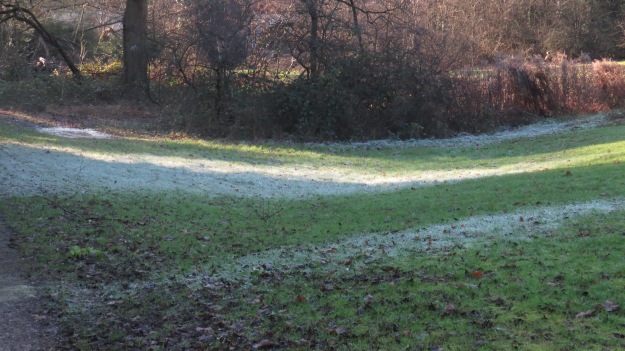 I follow the stream on until it gets to Henlys Corner, a major crossroads with turnings towards Temple Fortune and Golders Green, and to Finchley Central. I have to leave the river, cross four lanes of traffic and then descend again, for the last stretch of the walk. 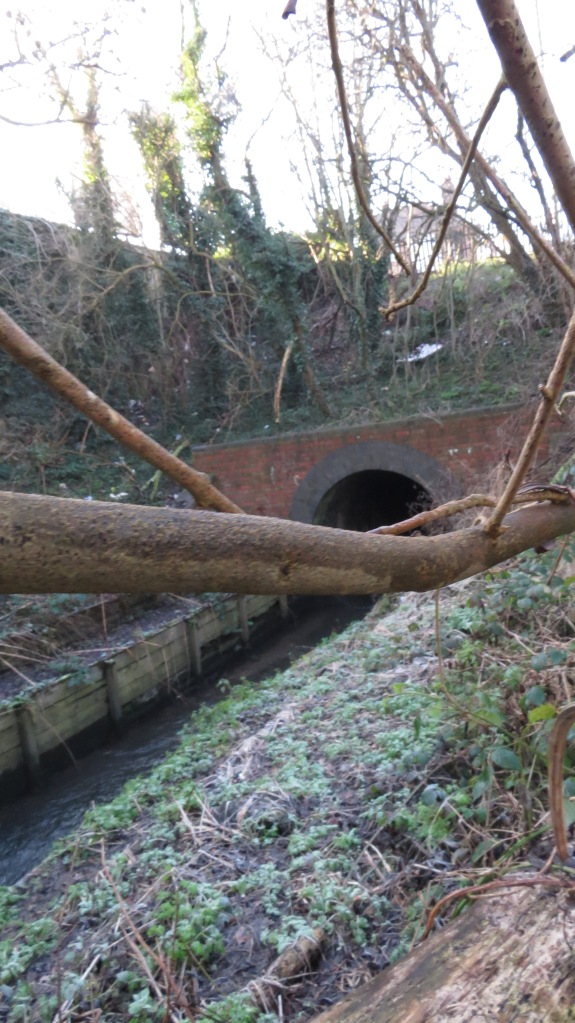 ….and back to the Mutton Brook

According to my map, another underground stream joins the Mutton Brook here. I look up the hill, and sure enough, there’s another manhole cover, of a most interesting shape.

And on I go, still accompanied by robins and the sound of running water.

And it appears that I am not the first person to have passed by recently either.

And soon, I walk under another tunnel, where the sound of water drops and the play of sunshine on the tiled roof makes it feel almost like the courtyard at the centre of a riad (or at least, it might feel like that if it wasn’t a few degrees below zero). 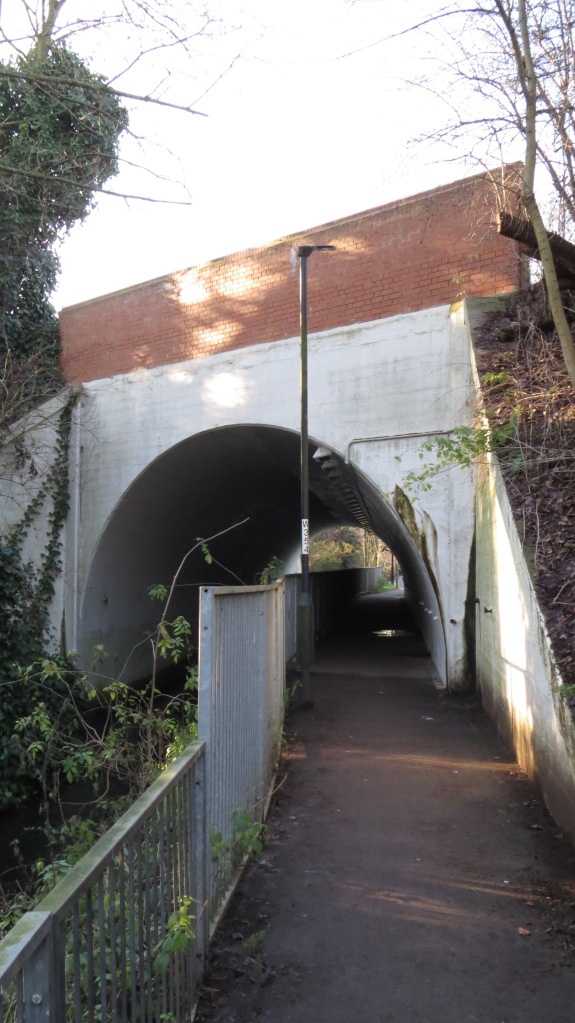 When the end comes, it’s  almost an anti-climax, except that yet another robin is trilling his watery song in the sunshine.

The Mutton Brook joins the Dollis Brook, and the two together become the River Brent, which eventually becomes part of the Thames. 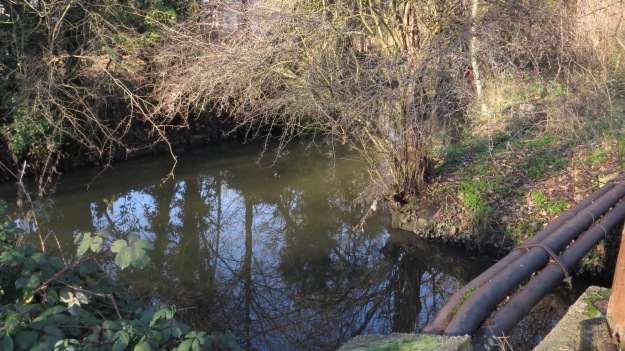 The Mutton Brook (foreground) joins the Dollis Brook coming in from the right to become the River Brent.

And so, I’ve walked the Mutton Brook from end to end, from its ambiguous beginning to its final merging. I can heartily recommend a river-led adventure as a source of unexpected delights, and as  a way to really learn the character of a body of water, and how it changes along its length. I had always taken water for granted, and yet it is mysterious, emerging where it will and, as much as we like to try to control it, volatile in its moods. There is much to contemplate when walking by a river, however humble.

All blog content copyright Vivienne Palmer. Free to use and share non-commercially, but please attribute and link back  to the blog, thank you!