On a Thursday lunchtime, the streets around London Bridge station are mobbed with folk heading for Borough market to pick up their artisan coffee and hog-roast sandwiches, but just a few hundred yards further on is the garden of the Crossbones graveyard, a place of pilgrimage for many and a space for quiet contemplation amidst the traffic, human and vehicular.

It is  said that the site was originally a medieval burial ground for the sex-workers, or ‘Winchester Geese’ who worked in the area, and who were required to be buried in unhallowed ground. I went to an exhibition at the Wellcome Collection in the 1990’s which showed a variety of skeletons, and told what could be learned from their condition. One of the bodies, exhumed from Crossbones,  was of a woman estimated to be 16-19 years old, only 4 foot 7 inches tall, and with well-advanced syphilitic lesions of the skull. I remember being haunted by the delicacy of her bones as she lay exposed in a glass case. I have always been simultaneously fascinated by what these remains can tell us, and appalled at what feels to me like desecration. I imagine that the young woman now lays in a vault in the Museum of London – the circular building in the middle of the roundabout there is an ossuary, full of historical bones.

The site was subsequently used as a pauper’s graveyard. Over 15,000 people too poor to afford burial were buried here, many of them children under a year old. The graveyard itself fell into disuse after 1853, at which point it was said to be absolutely full of remains, with one body thrown on top of another.When the site was used for the Jubilee line extension in the 1990’s, 142 bodies were disinterred, among them the young woman mentioned above.  The ribbons attached to the memorial gates of the site record the parish records for some of the people buried at the site. 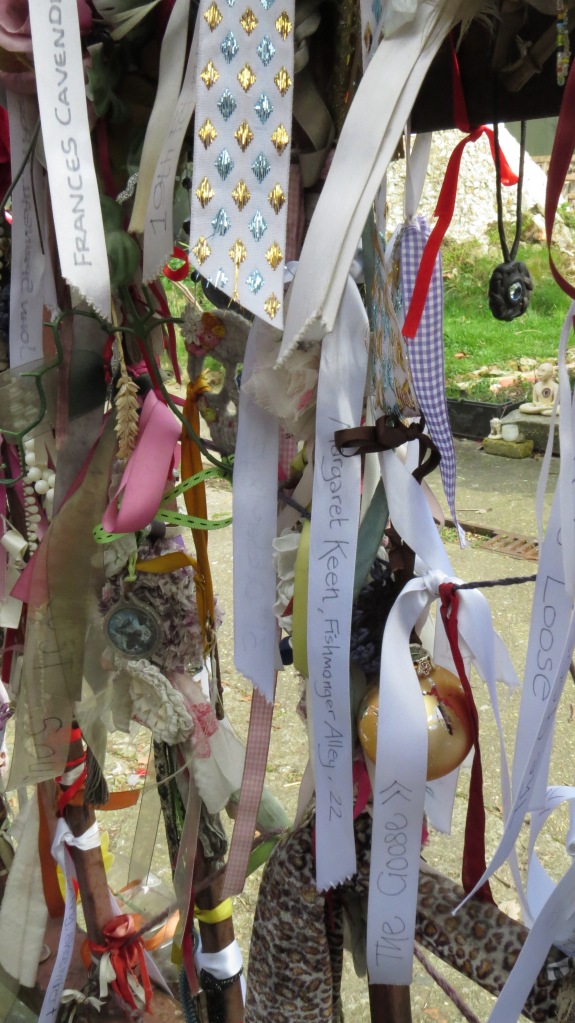 People also attach remembrances of those who have died more recently, so that the gates are covered with tokens of those who are no longer on this earth. 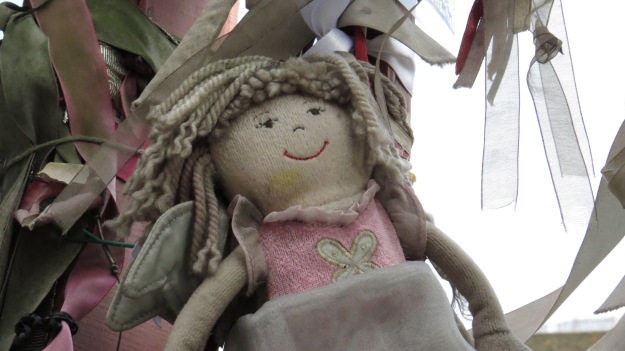 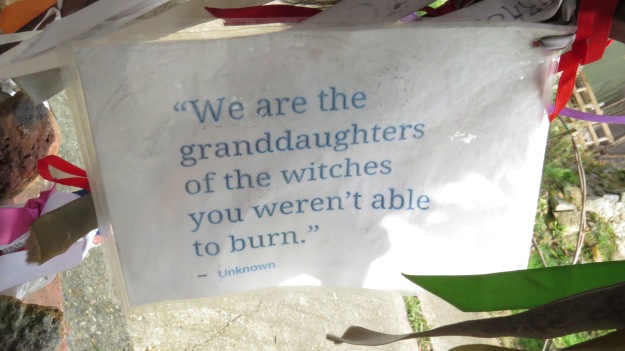 Inside the garden there is a quiet space, where the rattle of trains en route to London Bridge is interspersed by the flapping of a wood pigeon’s wings and the song of a blackbird.

The entrance to the garden is via an elegant ‘goose’s wing’ shelter. There is a feeling of hopefulness and renewal, as the plants break into flower and the bees go about their work once again.

A queen wasp resting in the euphorbia

The willow tree was positively abuzz with honeybees collecting pollen to feed the larvae back in the nest. I love the little orange ‘baskets’ on their legs. It just goes to show that even in such an urban spot, insects will be attracted if we grow the right plants. 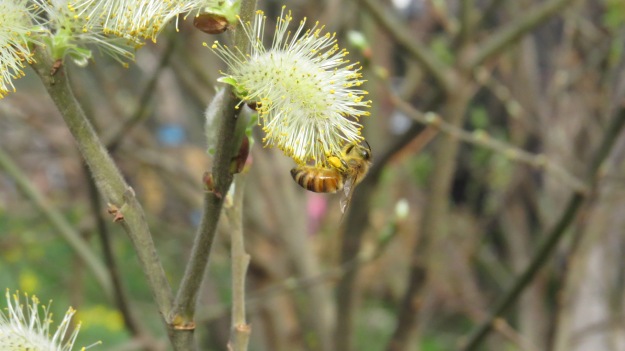 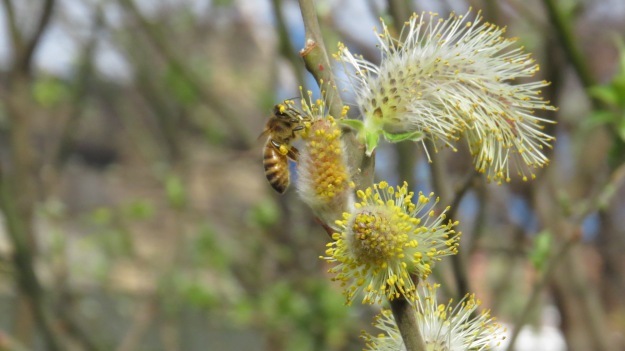 There were some other excellent pollinator plants in the garden as well.The early spring bees were all over the periwinkle, but were a bit too fast for me to get a photograph.

The brunnera was doing a great job of attracting pollinators as well – this is a great woodland plant, and mine is just popping up again in my garden (though it’s well behind this one).

The green men statues are honoured at a ceremony in the autumn giving thanks for nature’s generosity. 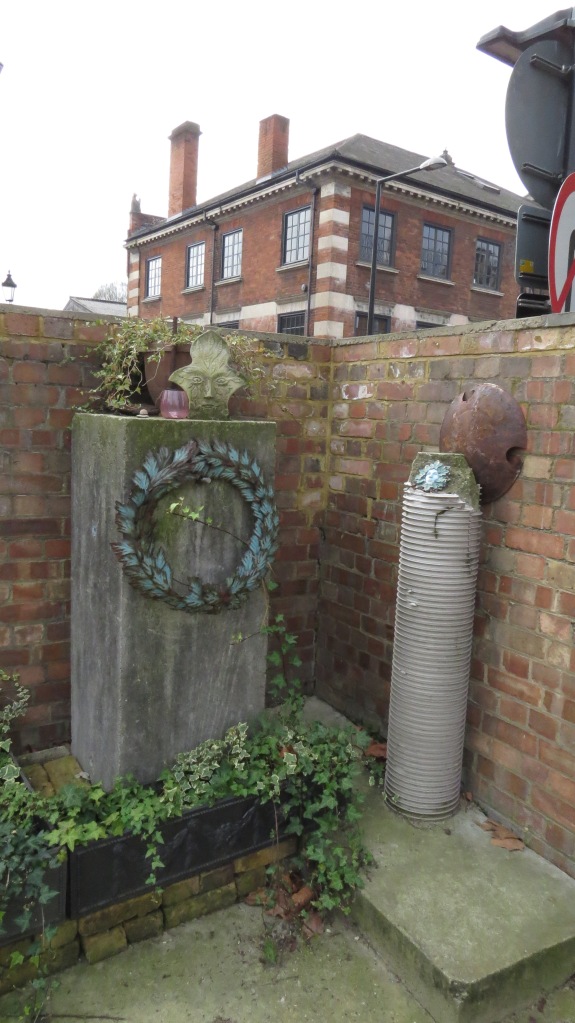 The boards at the end of the site shows a map of the area in medieval times, and two poems taken from the ‘Southwark Mysteries’, a contemporary Mystery play written by local author John Constable, and performed by 50 professional actors and a cast drawn from the local community, at the Globe Theatre and Southwark Cathedral in 2000, and again in 2010. The plays, with their ribaldry and boisterous nature, attracted a great deal of controversy, as you can read here. However, the overall message of the production was that no one is beyond redemption, and I’d have thought that this was something that was intrinsic to Christian belief.

In 2007, before the garden was officially ‘a garden’, one of the on-site security guards, Andy Hulme, began to construct ‘the invisible garden’ behind the gates and shrine which were at that time the main focus of the site. One of his works was the Pyramid, into which seeds have been scattered over the years. One side of the pyramid is covered in oyster shells from Borough Market – oysters were once the food of poor people, washed down with gin or stout. Many of the people buried in the graveyard would have eaten them. 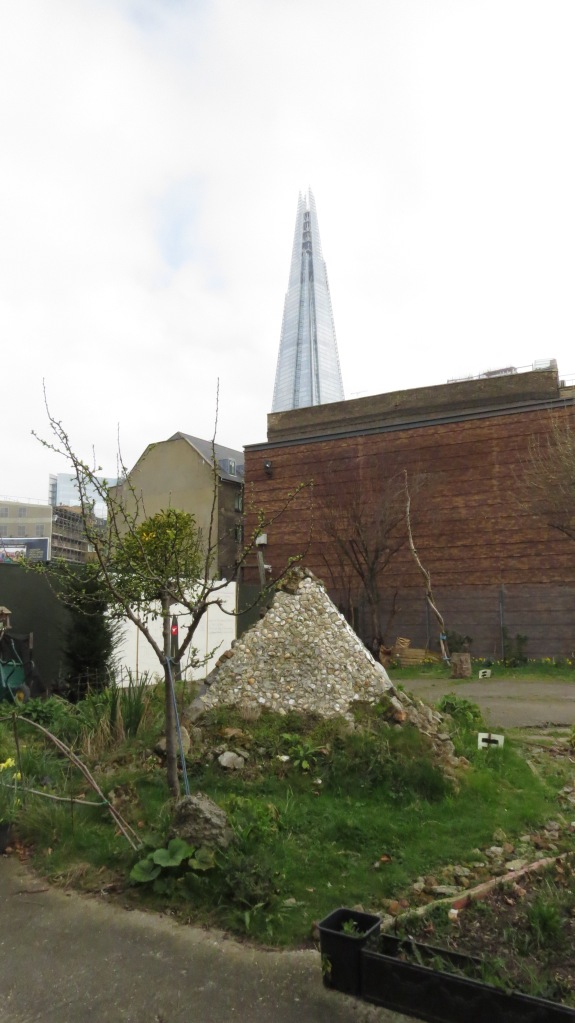 The pyramid built by the Invisible Gardener

The most moving part of the garden though, for me, was the shrine behind the gates. A statue of the Virgin Mary tenderly cradles a goose, surrounded by flowers and tokens, and by broken chains. For many people, the statue also represents the Goddess, and it is typical of the inclusivity of Crossbones that, if you look, you will find symbols of many faiths. The principle here is divine love, whatever form it comes in. 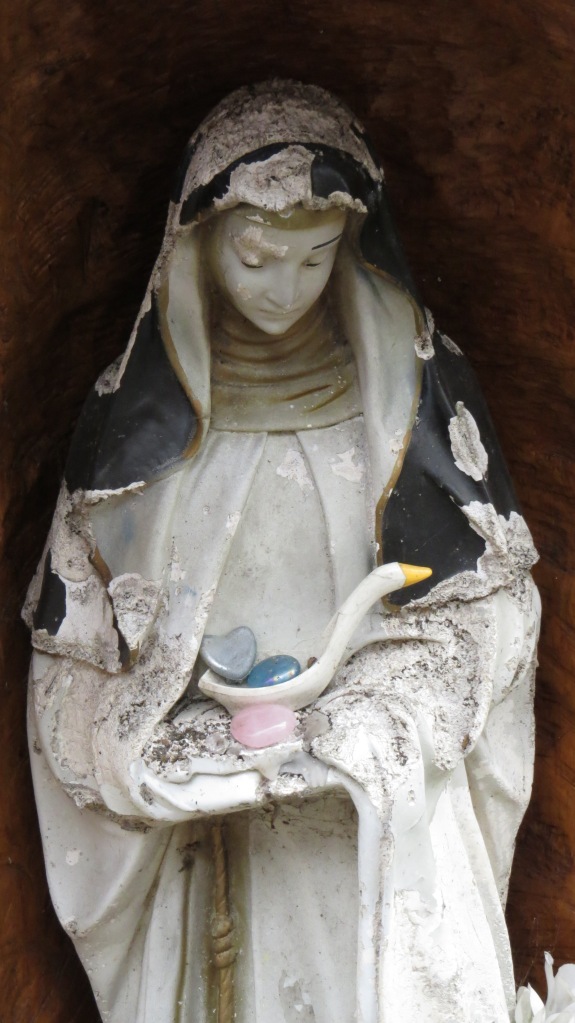 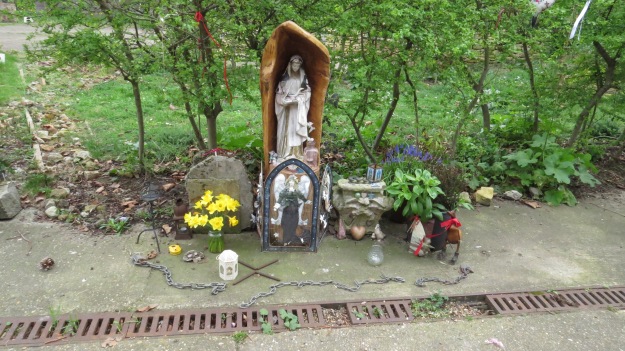 The garden is currently leased from Transport For London (who recognise its role as public space) and is managed by Bankside Open Spaces Trust and the Friends of Crossbones, who provide volunteers to open the garden between 12 and 2 pm on weekdays, and for a longer period at weekends. The garden is free to enter, but do sign the visitors book on your way out – when the usage of a space is recorded, it’s much easier to protect it from the ‘powers that be’. There have been many times in its history when Crossbones has been under threat.

Crossbones role as a memorial garden for the outcast dead is what makes it unique.  We are all just one mental illness, one financial catastrophe, one crushing bereavement, one addiction away from becoming outcasts ourselves. And in a city where everything moves too fast, and follows the money too enthusiastically, it is easy for people to be left behind. Only by including everyone can a city or a community thrive, and Crossbones is a powerful symbol of those who were not, and are not, included. Ceremonies of remembrance are held on the 23rd of each month at 7 p.m., not just for those buried in the garden but for all our outcast, dead and alive. 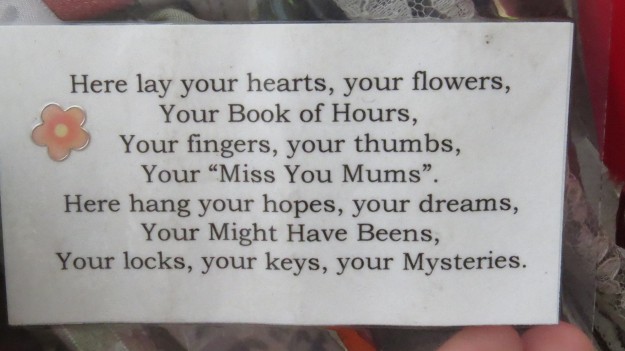 All blog content free to use and share, but please attribute and link back to the blog, thank you!

18 thoughts on “Bugwoman on Location – At Crossbones Graveyard”