Dear Readers, sometimes death visits the garden. It’s inevitable, I suppose – the number of birds feeding there is a magnet for a predator. Usually I just find the evidence – the sad body of a blackbird with his head removed, a sea-foam of feathers under the hedge, and once two tiny limp dove’s feet. But on Sunday last week death came for a longer visit, in the form of a female sparrowhawk, who killed a collared dove with icy efficiency and then dismembered it on the garden path. 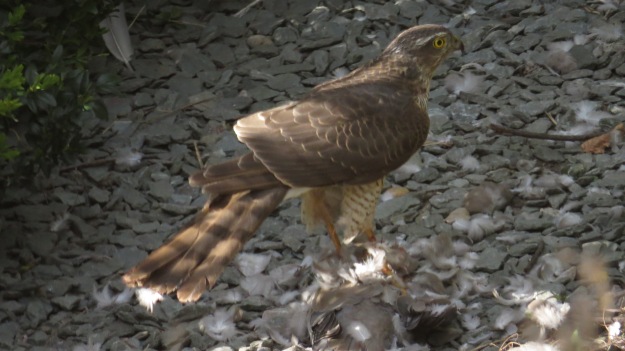 She stood on the corpse, plucking great mouthfuls of feathers and throwing them away with a jerk of the head. Occasionally, she’d lift her foot and scratch her beak to get rid of the fluff. Every few seconds, she’d look up and around with those manic yellow eyes, before getting back to work. Her talons, like black steel hooks, were deeply embedded in the breast of her prey, and the bare legs kept her a little above the gore.

After a few minutes she started to feed, ripping at the meat, all the time looking around. I really wanted her to turn, and eventually she did, so I could get a look at her chest feathers, barred in white and chocolate brown. Her tail feathers looked a little sad and ragged, but she was generally in good condition. And she was bold, too. At one point she heard the lady next door come outside to hang her washing up, and the bird looked around and froze. But after thirty seconds she went back to her meal.

As the sparrowhawk fed, the garden fell silent, except for the blue tits who are nesting next door. They were frantic, and their whirrs and peeps of alarm sounded like a soundtrack to the sparrowhawk’s tearing and rending. The great predators of the world are attended by an envelope of sound, that travels with them as they move about, like the trumpets of courtiers.

I felt bad about the dove. They come to the garden because I feed them, and this should be a safe place for them. But the sparrowhawk might be incubating eggs, or have nestlings, and needs to live too. Plus, although it matters not to the poor dead prey, this is a wild bird, not some domesticated cat entertaining itself. Sparrowhawks have been killing other birds for millenia. Maybe this is the kind of death that an animal can understand, unlike the many endings that we visit upon them, with our guns and poison and traps and laboratories, our slaughterhouses and factory farms and many forms of ‘entertainment’. It was at least an honest death, one animal to another, for simple reasons.

I went upstairs to change my camera battery, and when I came back the hawk was gone, and so was the dove: the sparrowhawk must have carried off its carcass to enjoy in a more peaceful spot. The feathers were still drifting and settling in the breeze of her departure. And in her place there was a hawk-shaped absence, a delay in the return to normality, as if the bird had carved a space in the universe, and the atoms were reluctant to rush back in. Not a single dove or pigeon came to the whitebeam tree for the rest of the day, but today they are on the seed feeder again, pragmatic as all wild animals are. If the hawk fed yesterday, maybe she won’t need to feed today.

17 thoughts on “My Manners are Tearing Off Heads (Ted Hughes)”