Dear Readers, it has been my great pleasure to spot this exquisite plant twice in one week. On Wednesday, I saw it in a tiny fragment of woodland in Milborne St Andrew, Dorset, when I was visiting my parents, and on Thursday I found a tiny patch in Coldfall Wood, part of my East Finchley ‘territory’. This plant spreads by less than six feet every hundred years, and so is a reliable indicator of ancient woodland – the plant’s seed is rarely fertile, and so it relies on root growth in order to propagate.

Windflowers are also known as wood anemones, grandmother’s nightcap, and, for more than one small child, ‘wooden enemies’.  It is said to have a sharp, musky scent on a warm day, which has led to another obsolete local name of ‘smell foxes’. The plant belongs to the buttercup family (Ranunculaceae), and is native to the UK. 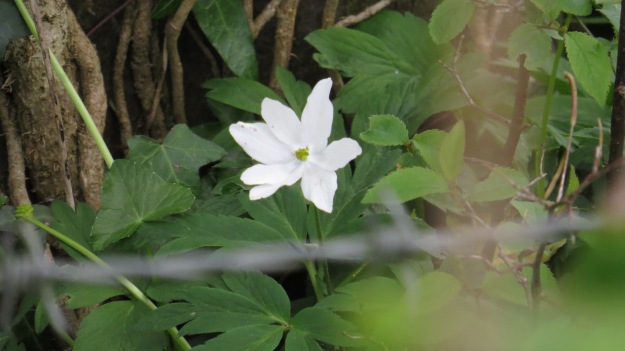 Although it’s a woodland plant, windflower comes into flower early while the tree canopy is still not extensive, like so many other plants in the family (winter aconite and lesser celandine come to mind). Windflower does not like deep shade, and the flowers will only open fully in sunshine, which is when their chief pollinators, hoverflies, are about. It is an ephemeral beauty, in flower for a short season and then disappearing until the next year. What a good reason for a brisk April walk in the woods! In the language of flowers, wood anemone stands for brevity, expectation and forlornness, so is probably not something that you want to pop into a bouquet for your beloved. Not unless you want a clip round the ear’ole, as my Dad used to say. 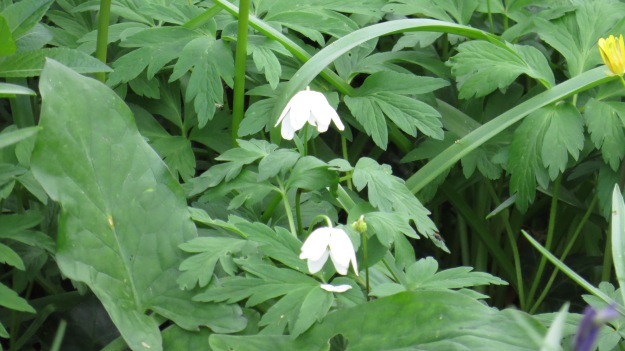 The troubled nineteenth century poet John Clare was ever a close observer of the plants and animals around him, and described the windflower thus:

‘What pretty, drooping weeping flowers they are!

The clipt-frilled leaves, the slender stalk they bear

On which the drooping flower hangs weeping dew!

How beautiful through April time and May

With flowers mid brushwood and the huge oak trees. 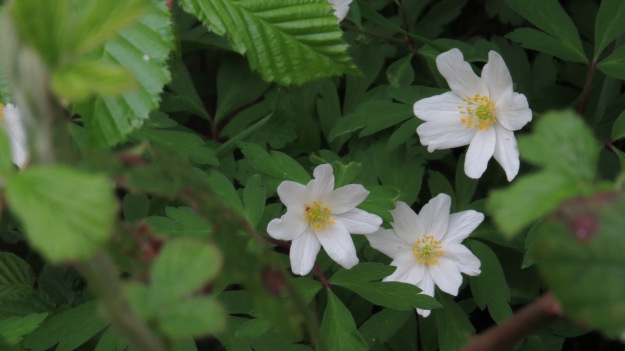 I wondered why the plant was called ‘windflower’ (and anemone means ‘wind’ in Greek). Greek legends believed that the flowers were the harbingers of the windy season of early spring, and Pliny stated that the plant only opened on windy days. The plant was also believed to have sprung from the tears of Aphrodite as she wept for the death of Adonis.

Like so many plants, the windflower has been considered a symbol of both good and bad luck. It was a symbol of sickness for the ancient Egyptians, and the Chinese consider it a flower of death. On the other hand, the Romans believed that if it was picked while saying ‘I gather this against all diseases’ and then tied around an invalid’s neck, it would provide a certain cure.

The plant contains a variety of toxins, and is poisonous to humans and livestock – Linnaeus mentions how cattle kept indoors over the winter would sometimes harm themselves by bolting down anemone leaves as soon as they got out of the barn. However, I can find no recent authenticated cases of anyone or any creature being harmed by a surfeit of windflowers, so I suspect that you would need to munch a lot of them.

Historically, the plant has had a variety of medicinal uses, such as treating headaches, ‘tertian agues’ and gout, along with leprosy, eye infections and ‘malignant and corroding ulcers’. Most of the treatments involved either ointments or chewing the roots: the latter would, I suspect, be most unpleasant, as the toxins in the roots are powerful irritants. Maybe it was a kind of ‘ordeal by plant’, at the end of which the sufferer would feel better because at least his mouth wasn’t on fire anymore. Anyhow, gentle readers, I advise you against any such activity, if only because the root you’d be chewing could have taken many, many years to grow.

I love the delicacy of these flowers. If you look at the petals closely, you can see a tracery of faintest lilac, and the butter-yellow stamen are a contrast to the green carpel in the middle of the bloom. They are snowy-white against the gathering gloom, racing to complete their life cycle before the leaves on the hornbeams and oaks above them shut out the light until autumn. They would be just the thing in my garden, as I usually say at the end of a Wednesday Weed. What a pity my garden isn’t ten times larger, so that I could accommodate all my new favourites!