Dear Readers, I wanted to find a ‘proper’ weed for you this week, and here it is. Way back when I started this blog, one of the very first plants I wrote about was Smooth Sowthistle and I have been looking out since then for the prickly variety. I shouldn’t have needed to look very hard because goodness knows it’s everywhere in the UK except for in the very far north of Scotland, but it has proved elusive until today. How delighted I was to find it lurking in a little alleyway close to Fortismere School here in East Finchley, and how surprised all the passersby were to see me taking its portrait.

Both sowthistles are native,and both are annuals. They are extraordinarily tough plants and require next to no soil to produce an extraordinary quantity of biomass, and a fine crop of seeds. There is one in the tree pit just up the road from my house that must be nearly a metre tall. How I admire these city-dwellers for their resilience in tough times! No amount of drought, dog urine, litter or polluted rain puts them off their stride. They remind me of Dickensian urchins, cheeky and adaptable. The only thing that slows them up is a biannual dousing with weed-killer, administered by a man from Barnet Council with a backpack full of biocide and a hose. He wears ear-buds so that he can listen to music while he sprays, but no face mask to protect his lungs, and no gloves to protect his skin. I fear that the chemicals are more prone to damage him than the plants for, although the weeds wither and die, they or their offspring are generally back within the month.

Of the two species the prickly sowthistle is, surprisingly, the one that is preferred for eating – luminaries such as Rose Gray of the River Cafe are said to have gathered the fresh young leaves in March and April for salads. According to Pliny, Theseus was treated to a dish of sow-thistles before he headed off to fight the Bull of Marathon. The plant was also fed to lactating sows (hence the name) to encourage their milk production – the white sap was thought to be indicative that this was the best use for the plant. In fact, many grazing animals love sowthistle, although farmers generally view it as a pernicious weed. In Germany, it is believed that a fleeing  hare can hide safely under the leaves of sowthistle as the plant will protect the animal (hence another alternative name for the plant, ‘hare-lettuce’).

The older leaves of sowthistle are often decorated with the white tracery of leaf-miners – usually these are the tiny caterpillars of micromoths that live between the two layers of the leaf and spend their lives munching little tunnels. I often wonder what leads to the shapes of the patterns – did the caterpillar meet another caterpillar coming in the opposite direction and have to back up? The filigree is rather attractive, I think, if not particularly advantageous to the plant. Other moth species eat the leaves and the buds, and the plant invariably attracts lots of aphids, which make it useful for attracting predatory insects such as ladybirds and lacewings.

Amongst the moths that feed on prickly sowthistle are the Broad-barred white (Hecatera bicolorata), whose caterpillars feed on the buds and flowers: 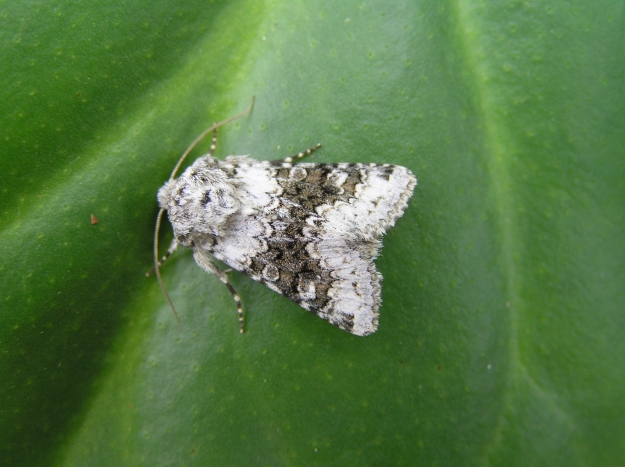 the grey chi (Antitype chi) whose caterpillar feeds on the leaves: 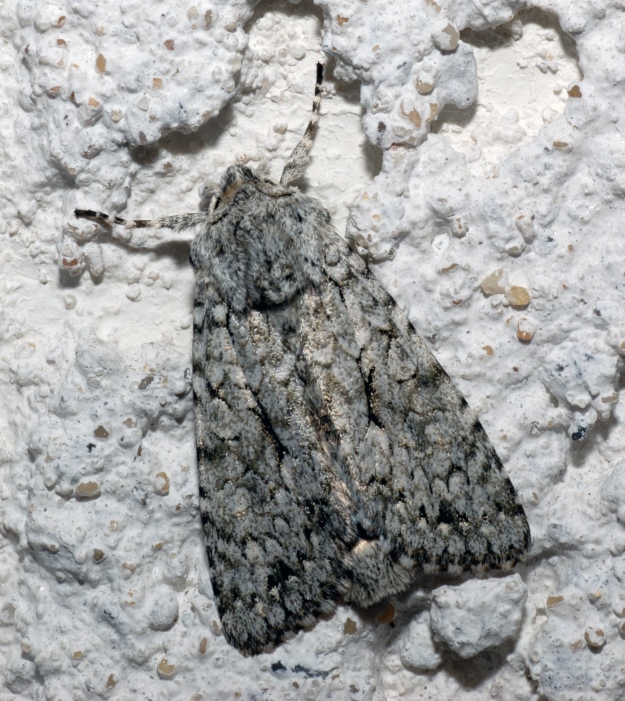 and the rather elegant shark moth (Cucullia umbratica). Although most UK moths are not as brightly coloured as their tropical counterparts, they have a subtle and delicate beauty that repays close attention. 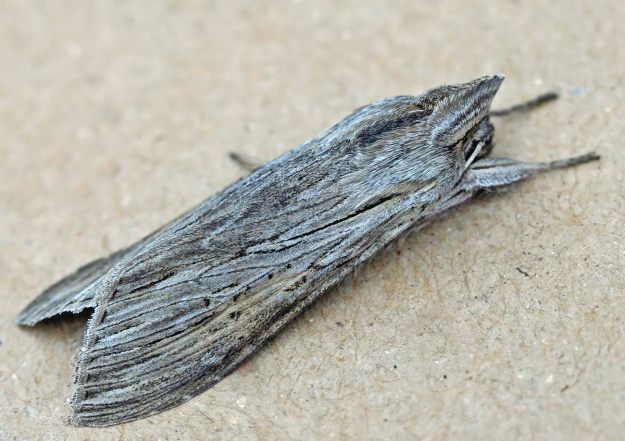 Prickly sowthistle has a wide native range, encompassing Europe, North Africa and Western Asia, and has been imported into North America, probably with grains used for food. Across its native range it has been used medicinally as a poultice for wounds and skin complaints, though many herbals consider smooth sowthistle to be slightly more efficacious.

As I feared, the common-or-garden nature of the poor old prickly sowthistle has meant that it has not featured widely in art. Even the Sowthistle Fairy of our old friend, Cicely Mary Barker, is standing on a smooth sowthistle, not a prickly one (have a look at those basal lobes, friends). 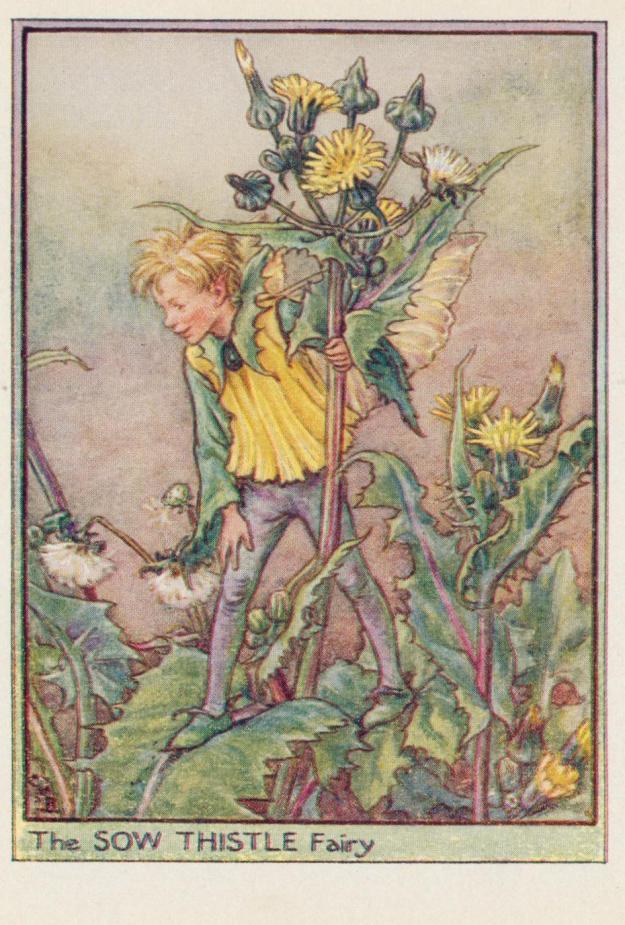 Nor is there a superabundance of sowthistle poetry. However, I hope you’ll forgive the tenuous link to this extraordinary poem by Sylvia Plath. After all, sowthistle was fed to lactating pigs, as we know. Maybe it was also used to fatten them up.

God knows how our neighbor managed to breed
His great sow:
Whatever his shrewd secret, he kept it hid

In the same way
He kept the sow–impounded from public stare,
Prize ribbon and pig show.

To gape at it:
This was no rose-and-larkspurred china suckling
With a penny slot

For thrift children, nor dolt pig ripe for heckling,
About to be
Glorified for prime flesh and golden crackling

In a parsley halo;
Nor even one of the common barnyard sows,
Mire-smirched, blowzy,

Maunching thistle and knotweed on her snout-
cruise–
Bloat tun of milk
On the move, hedged by a litter of feat-foot ninnies

Shrilling her hulk
To halt for a swig at the pink teats. No. This vast
Brobdingnag bulk

Unhorsed and shredded in the grove of combat
By a grisly-bristled
Boar, fabulous enough to straddle that sow’s heat.

But our farmer whistled,
Then, with a jocular fist thwacked the barrel nape,
And the green-copse-castled

Pig hove, letting legend like dried mud drop,
Slowly, grunt
On grunt, up in the flickering light to shape

Of kitchen slops and, stomaching no constraint,
Proceeded to swill
The seven troughed seas and every earthquaking
continent.