Dear Readers, as I walked home  through Muswell Hill on a cold Sunday morning, I was surprised to hear the sound of buzzing, and to see not one but three bumblebees feeding from these sputnik-shaped flowers. Japanese aralia is an exotic, but as more and more bumblebee nests are surviving the winter it has become a valuable source of nectar and pollen. A  glance at the flowers put me in mind of ivy, which is not surprising as both are members of the Araliaceae family, and there is at least one hybrid between  this plant and an ivy.

The genus name ‘Fatsia’ comes from an old Japanese word for ‘eight’, and if you look at the leaves you’ll see that they usually have eight ‘fingers’ (though they can have seven, or nine). As you might guess from this, the plant is native to southern Japan and South Korea. The Japanese name for the plant is ‘Yatsude’, meaning ‘eight-hand’. Whatever the number of lobes, the leaves are evergreen, shiny, and rather attractive. However, as you can see in the photo below, even evergreens may have an ‘autumn’, when older leaves turn yellow and drop off – I have a viburnum in a pot which did this this year, to my horror. However, it’s now doing well, so I can breathe again.

A Fatsia leaf (one of the eight lobes is hidden, honest!)

Japanese aralia is a great plant for shady conditions and heavy soils, and so it should be a shoo-in for my north-facing, claggy-soiled garden, if only I had a bit more room. However, I have a very dark side-return which is currently home to potted camellias, a daphne and a climbing hydrangea, so maybe I will find a spot for one here (they’re hardy down to -14 degrees, so hopefully that should be ok). I am somewhat tempted by this new variety, though in my experience you’re often better off with the old faithfuls. 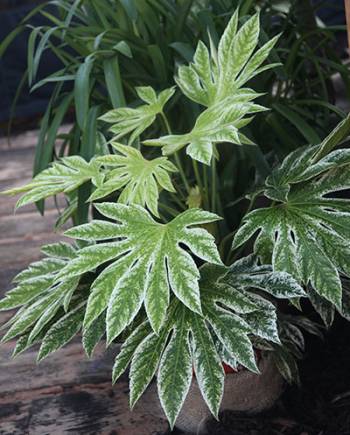 I absolutely see the point of raising native flowers in some habitats: I have friends in the US and in Australia who do this, and I think that there’s a real need to support wildlife by growing the plants that evolved with them to be the perfect source of food and shelter. In London, though, there are already so many foreign species that I think it’s a case of deciding which will benefit creatures such as pollinators when no native plants are in flower, or available as food for larvae. For example, winter-flowering plants such as Mahonia and Fatsia fill a feeding gap for over-wintering bumblebee queens and for the nests that survive these days.

Although Japanese aralia is sometimes known as the castor-oil plant, it is not related to the actual castor-oil plant (Ricinus communis), although the leaves are similar. This is important for several reasons, particularly because the ‘true’ castor-oil plant is extremely poisonous. You will sometimes find Fatsia japonica labelled as ‘false castor-oil plant’, to add to the confusion. This is why Latin names are so important -at least we all know that we’re talking about the same thing.

In Japan, the shoots of Fatsia japonica are harvested and used as a vegetable, and very tasty they look too…

Japanese aralia has been used as an anti-inflammatory in Japan and Taiwan, and hence in the treatment of such conditions as osteoarthritis and rheumatism. In folklore those huge eight-pointed hand-shaped leaves were thought to repel devils, and the plant was grown on the north side of the house from whence these enemies were thought to come (though as this is presumably also the coldest side it seems like a bit of a risk for the plant.).

Dear Readers, last week I described how the ginkgo trees in Japan were among the few to survive the bombings of Hiroshima and Nagasaki, and today I found this photo essay on the effects of those bombs. And here is a photo of the shadow of Fatsia japonica leaves left on a telegraph pole following the flash from the bomb at Hiroshima. What happened to the plant eventually is not recorded. At a time when the idea of nuclear war, so long considered unthinkable, has become a ‘viable option’ for some leaders of the Free World, it’s as well to stop to consider what it really means. Some of the other photos in the essay show exactly what happens when you drop a nuclear device on other human beings.

This photo was taken by the US Army following the bombing of Hiroshima. Note the shadow of the leaves on the telegraph pole.

And, following the disaster at Fukoshima, Japanese poets have also been concerned with the effects of the radiation released by natural forces. In the collection ‘Reverberations from Fukushima: 50 Japanese Poets Speak Out’, Setsuko Okubu, who lived in Fukushima, considers the effect of this devastating event on her home:

In “To My Home,” Setsuko Okubo affirms, “Our prime blessing is brought by the soil..inherited and guarded.” In the first and last stanzas, the repetition of the names of wild plants they used to gather serves as a litany.

Butterbur sprouts, five-leaf aralia, fatsia sprouts, bracken, and parsley.
When the mountains are ready
for the sprouting of plants,
the rice fields are dug, and the fields are cultivated,
calves are born,
horses are pastured,
and chickens lay eggs.
It’s a season full of life.
In the fall
Ears of rice rustle.
The smell of rice heralds the harvest.

Then, “In a twinkle it vanished../ life-taking radiation —/ contaminated my home”

We had to slaughter the cows that we had tenderly watched over.
We abandoned our racehorses that we had raised with the utmost care,
left our houses, fields, and livestock, and evacuated.
We drift from shelter to shelter as refugees.

Spring has rolled around again.
Butterbur sprouts, five-leaf aralia, fatsia sprouts, bracken, and parsley.
They are waiting to be picked
on the desolate land.

My heart goes out to people everywhere who have to leave everything that they know and leave their homes, whether through natural disaster or war, drought or famine. It sometimes seems as if the whole world is on the move, and this will only increase as climate change makes areas uninhabitable. Building walls against others is no solution. We need to learn to live with people who are different from us, and we need to learn fast. We have always been the adaptable ape, and I hope this will stand us in good stead in the future, though some days I despair. But not today, because the bees are feeding on the Japanese aralia, and will go home with full stomachs to survive another day.