Dear Readers, when you see the Christmas trees stacked up outside Tony’s Continental in East Finchley, you know that Christmas is well and truly on its way. Another indication is when you see Michael with an axe in his hand, ready to pare down the trunks and fit them into a Christmas tree holder. One conversation with a customer went like this:

Customer: ‘Careful with that axe, you’ll cut your leg off!’

Michael: ‘I’ve been doing this for forty years and I haven’t cut one off yet! But even if I did, I’ve got another one’.

Here is a photo of Michael at work. To be honest, it’s not his legs I’m worried about. 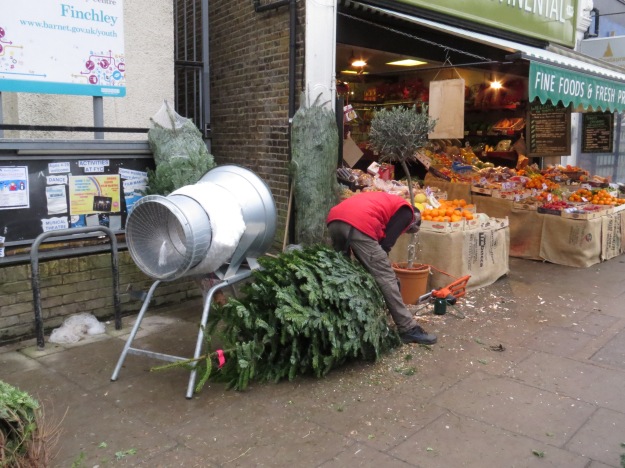 I am also much impressed by the Christmas tree wrapping contraption that is brought out every festive season. Just pop a tree into the metal tube, push it through and it comes out wrapped in a netting bag. It’s a kind of Christmas tree sausage machine.

60% of the Christmas trees that are sold in the UK are Nordmann firs, and I can see why – the tree has soft, child-friendly needles that don’t drop, and it is a good-value, long-lived tree. What it doesn’t have is any fragrance so you won’t get that delicious piney smell, but as this scent makes some people’s noses twitch, it’s not necessarily a bad thing. 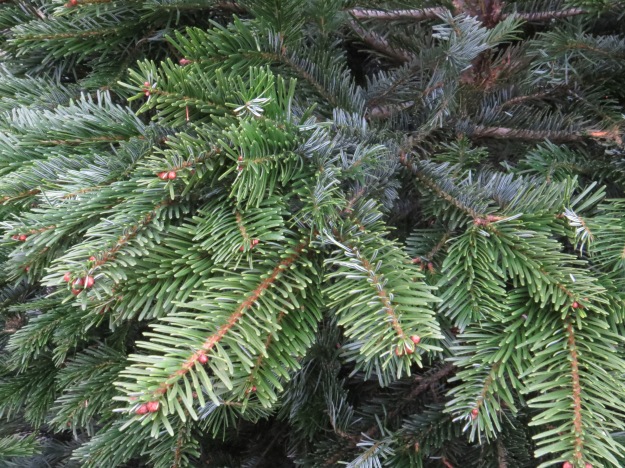 Nordmann firs come originally from the mountains to the south and east of the Black Sea, and so are native to Turkey, Georgia, the Russian Caucasus and parts of Azerbaijan. They live in mountainous areas from 900-2200 metres and grow to a terrific height  – one tree in the Western Caucasus reserve has been reported to be 279 feet tall, the largest tree in Europe. They also live in regions which have a rainfall of over 1000 mm per year, which is a reminder to keep them well-watered while they’re in the house.

The trees at Tony’s are typically about six to seven feet high, and would be between eight and twelve years of age. The seed is normally taken from older trees, grown on in nurseries and then sold to Christmas tree farms when the saplings are three to four years old. Once harvested, they will have a brief life of a couple of weeks in the house, before being put outside to be recycled by the council. Here in Barnet, the trees are chipped and used as a weed suppressant on municipal beds, or on paths. The chippings can also be heat-treated and then used as a soil conditioner (in their native state, the needles produce a chemical which inhibits the growth of other plants, which is one reason for the almost sterile under canopy of fir plantations).

The debate about whether to have a live tree or a cut one, or an artificial tree, depends, as usual, on a variety of factors. A live tree in a pot, that can be used year after a year, is probably the most environmentally-friendly option, but the trees often don’t survive the sudden change in environment. A cut tree is the next best choice, but only if it’s recycled: if it ends up in landfill, it generates about 16kg carbon due to the methane released as it decomposes. ‘Real’ Christmas trees also provide a habitat for a variety of birds and insects as they grow, including goldcrests, firecrests and crested tits, although the serried ranks of fir trees, row on row, are much less biodiverse than mixed woodland. 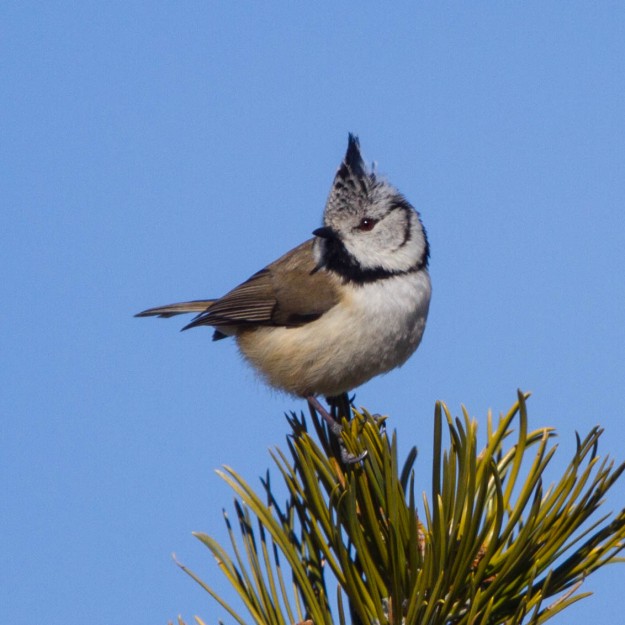 An artificial tree takes ten years of use to become carbon-neutral, due the the plastics and oils used in its creation. I have an artificial tree that I’ve been using for twenty-three years this year, and in typical Bugwoman style the only decorations allowed are ones that relate to animals. I shall have to post a photo once it’s up.

‘….the worst of all our experiments. It It seriously made us question our abilities and the whole concept!’

The tree was quickly replaced by the more fragrant blue spruce (Picea pungens).

Interestingly, the needles from Christmas trees of all kinds can be used in the manufacture of the anti-viral Tamiflu, which was in the news during recent worries about a bird flu pandemic. In Toronto in 2006, residents donated no less than half a million Christmas trees, and the needles were treated and powdered, ready to create up to a million Tamiflu tablets a day in the event of an outbreak. Let’s just hope that they’re never needed. 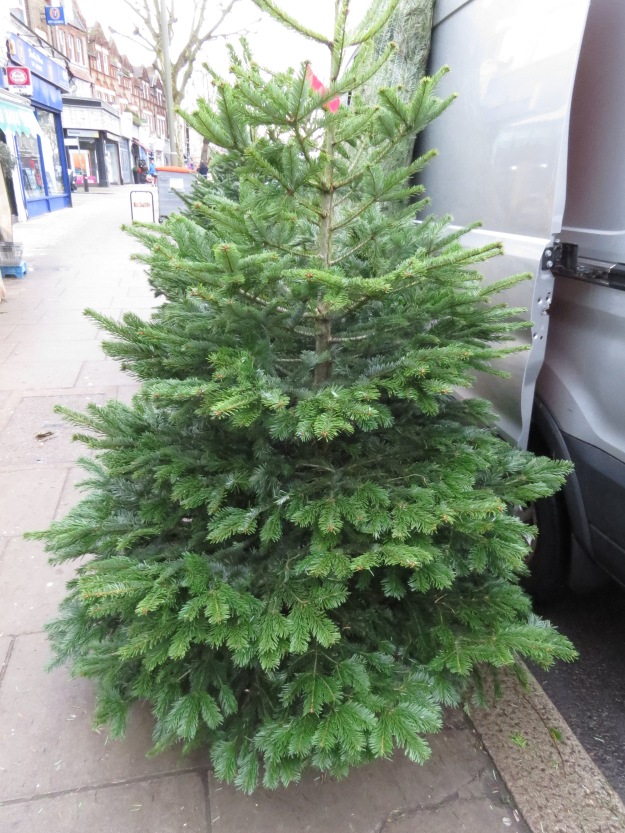 The Nordmann fir didn’t always have such a grasp on the UK Christmas tree market. When I was growing up, the favourite was the Norway spruce (Picea abies) which had little sharp pointed needles which seemed to drop off as soon as the tree came through the front door. I remember picking the needles out of the pads of our dog, Spock, who was the most accident-prone hound that I ever met. He once set fire to himself by leaning up against the electric bar heater, and was only rescued when someone caught a whiff of burning fur.

Christmas seems to be the time of the year when, in the UK at least, people yearn to bring plants into the house. For a month or so, our homes are staggering under the weight of poinsettias and amaryllises, Christmas cacti and hyacinth bulbs, holly wreaths and bunches of mistletoe, and that’s even before the tree arrives. Although the origins of the Christmas tree itself are said to be from Germany in the 16th Century, it feels as if something much older is going on, and indeed evergreen branches were brought into the house for centuries before the tree itself made an appearance. It seems to me that something very profound is going on: a need to remind ourselves that the darkness of winter is not forever, and that under the soil, life is still stirring. Plus there is something about a fir tree that reminds us of the resilience needed to survive outside in the harshest of weathers. I am curious about the choice of tree in other countries that celebrate Christmas. What’s the tree of choice in Australia, for example, or in California? Do tell, I am intrigued.

As you know, dear friends, I love to close these pieces with a poem.  I find that I am ambivalent about the folksy poetry of Robert Frost, although I love the one about riding through the woods with ‘promises to keep/And miles to go before I sleep’ and I can even tolerate ‘The Road Less Travelled’. And so, here is something thought-provoking from the poet, which speaks of town and country, rich and poor, and the worth that we put on living things.

By Robert Frost
(A Christmas Circular Letter)
The city had withdrawn into itself
And left at last the country to the country;
When between whirls of snow not come to lie
And whirls of foliage not yet laid, there drove
A stranger to our yard, who looked the city,
Yet did in country fashion in that there
He sat and waited till he drew us out
A-buttoning coats to ask him who he was.
He proved to be the city come again
To look for something it had left behind
And could not do without and keep its Christmas.
He asked if I would sell my Christmas trees;
My woods—the young fir balsams like a place
Where houses all are churches and have spires.
I hadn’t thought of them as Christmas Trees.
I doubt if I was tempted for a moment
To sell them off their feet to go in cars
And leave the slope behind the house all bare,
Where the sun shines now no warmer than the moon.
I’d hate to have them know it if I was.
Yet more I’d hate to hold my trees except
As others hold theirs or refuse for them,
Beyond the time of profitable growth,
The trial by market everything must come to.
I dallied so much with the thought of selling.
Then whether from mistaken courtesy
And fear of seeming short of speech, or whether
From hope of hearing good of what was mine, I said,
“There aren’t enough to be worth while.”
“I could soon tell how many they would cut,
You let me look them over.”
“You could look.
But don’t expect I’m going to let you have them.”
Pasture they spring in, some in clumps too close
That lop each other of boughs, but not a few
Quite solitary and having equal boughs
All round and round. The latter he nodded “Yes” to,
Or paused to say beneath some lovelier one,
With a buyer’s moderation, “That would do.”
I thought so too, but wasn’t there to say so.
We climbed the pasture on the south, crossed over,
And came down on the north. He said, “A thousand.”
“A thousand Christmas trees!—at what apiece?”
He felt some need of softening that to me:
“A thousand trees would come to thirty dollars.”
Then I was certain I had never meant
To let him have them. Never show surprise!
But thirty dollars seemed so small beside
The extent of pasture I should strip, three cents
(For that was all they figured out apiece),
Three cents so small beside the dollar friends
I should be writing to within the hour
Would pay in cities for good trees like those,
Regular vestry-trees whole Sunday Schools
Could hang enough on to pick off enough.
A thousand Christmas trees I didn’t know I had!
Worth three cents more to give away than sell,
As may be shown by a simple calculation.
Too bad I couldn’t lay one in a letter.
I can’t help wishing I could send you one,
In wishing you herewith a Merry Christmas.
Photo Credits
Photo One (Wild Nordmann Firs) by By Acidka on Flickr – Flickr, CC BY 2.0, https://commons.wikimedia.org/w/index.php?curid=5988580
Photo Two (Crested Tit) by By Ron Knight from Seaford, East Sussex, United Kingdom (Crested Tit (Parus cristatus)) [CC BY 2.0 (http://creativecommons.org/licenses/by/2.0)], via Wikimedia Commons