Dear Readers, this little rodent is not actually  a ‘new’ species in the garden – I suspect that what with all the fallen bird seed, wood mice have been around for years. Plus, there are an estimated 30 million wood mice in the UK, making them commoner than either the rat or the house mouse. However,  this is the first time that a wood mouse in my garden has been bold enough to pop out in broad daylight. What a little sweetie s/he is! The eyes and ears are much larger than those of the standard house mouse, and the coat is a warm brown colour, shading to cream on the stomach. And yes, I know that s/he eats bulbs and seedlings and berries and nuts, but then s/he is a mouse, and I would expect a mouse to do such things. Plus, what with all the predators in the garden I will be very surprised if the poor little thing has a long life ahead (most wood mice do not survive for longer than a year). Furthermore, s/he occasionally eats snails, of which I have a wide variety in the garden.

The mouse is living under the wooden steps which lead down to the pond (this makes the garden sound like some kind of stately home affair but I can assure you it isn’t). S/he runs out to the dropped seed under the feeder and leaps home at the slightest disturbance. The amount of febrile energy contained in that one small body is really something to witness.

Wood mice don’t really hibernate, and I wonder if the cold winter has meant that this one has run out of her food store, and has become especially bold – normally wood mice are nocturnal. And with good cause, as everything loves a tasty wood mouse, though if a predator grabs the end of a wood mouse’s tail it will separate from the rest of the appendage, and will never re-grow.

In Ireland, it was believed that boiled mice were a cure for incontinence in children and for whooping cough. It was also believed that if you left a bucket of (presumably dead) mice for a year, and then smeared your head with the contents, it would cure your baldness, thus illustrating the lengths that some folk will go to to restore their hirsuteness. In fact, wood mice are not native to Ireland, and they probably came to the country with mesolithic settlers about 8,000 years ago. There is also genetic evidence that some of the mice came over with the Vikings from Scandinavia, as they are more closely related to mice from this area than from the UK. I suspect that they were often harvested along with the grain that they fed upon, and took up residence wherever they arrived.

Because they are such tasty morsels, wood mice tend to forage small, covered areas close to their nests. They may pick up bright objects, such as berries, and leave them as ‘road signs’ so that they can quickly navigate their way home. These ‘signs’ are much less conspicuous to predators than scent marking would be – it’s easy to forget that cats and foxes also understand the signs left by other species. The only other mammal species in which this ‘waymarking’  behaviour has been observed is in humans. I sometimes wonder how many other facets of the natural world we are missing.

The only other time that I’ve met a wood mouse was when one used to pop into my brother’s living room. S/he would sit up on her haunches and look around hopefully, whiskers twitching. My brother took to leaving some custard creams in a little pile, and many an evening’s entertainment would be spent watching the wood mouse stashing what s/he couldn’t eat in various corners of the room. The lady who came in to do the cleaning was most unimpressed.

Wood mice can breed at any time in the warmer months, have multiple matings (so, as with cats, each offspring can have a different father) and have up to five babies after 25 days gestation. The babies themselves are sexually mature at 2 months. You can see how, if there weren’t predators about, there would soon be a whole lot of wood mice.

Look at the whiskers! (Photo One)

Incidentally, if something has been eating all the pips from your strawberries and discarding the pulp, it’s probably a wood mouse – unlike other animals, they seem to prefer protein to sugar. Maybe it’s their action-packed lifestyle that does it. 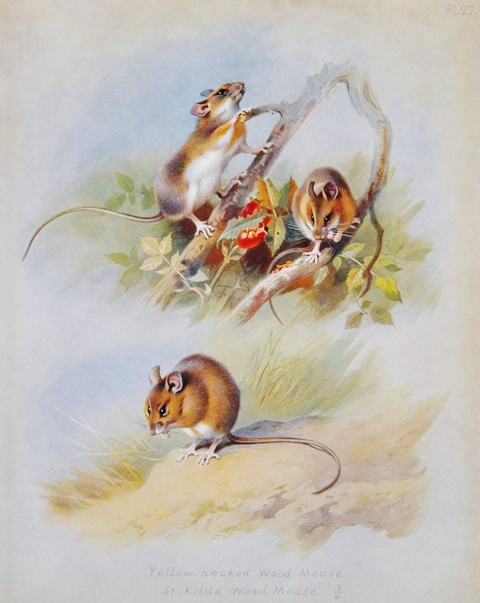 As you might expect, this attractive little creature has appeared in several children’s books. In the Brambly Hedge series by Jill Barklem, Lord Woodmouse is the head of Brambly Hedge, and is described as a ‘kind and knowledgeable mouse’. Jill Barklem teamed up with the Wildlife Trusts in 2015 to help teach children about the real life counterparts of her characters, and you can read all about them here. In the meantime, here is Lord Woodmouse in his best regalia.

In North America, Thornton W.  Burgess was a prolific nature-writer and conservationist who wrote dozens of books for children about the creatures of the continent. On the mouse front, there was ‘Whitefoot the Wood Mouse’, in which

‘The happy little creature finds the perfect spot in Farmer Brown’s barn, where he meets a friendly stranger, tumbles into a life-threatening situation, and learns the meaning of the word “trust.” 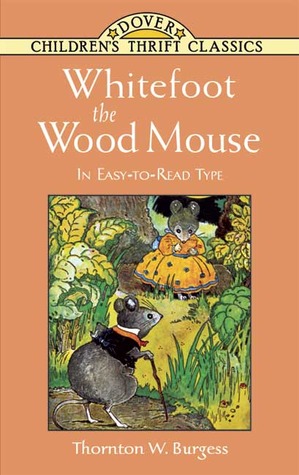 The North American wood mouse (or deer mouse) is not the same species as the European one that I have in my garden, but you can see the similarity.

There is something about the miniature world of the mouse that is enchanting – the way that the plants must loom overhead like trees,  dewdrops appear the size of beach balls, the menacing size of crows and cats. No wonder mice feature so often in children’s stories, for I believe that most children often have an instinctive empathy with creatures that are as small and vulnerable as they are. And then there is the way that mice seem to live on a different timescale from us lumbering adults. They are like quicksilver, doing everything at double speed, their short lives packed with incident and drama. When I see ‘my’ mouse hurrying out to grab a sunflower seed before the collared doves find it, I cannot begrudge them a single moment in the spring sunshine. It will be all too brief. 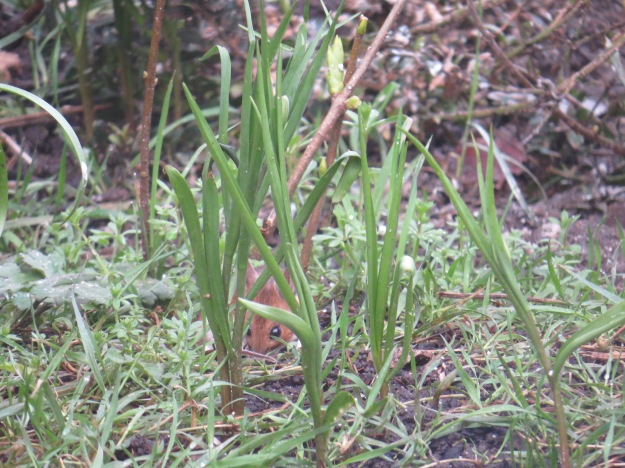