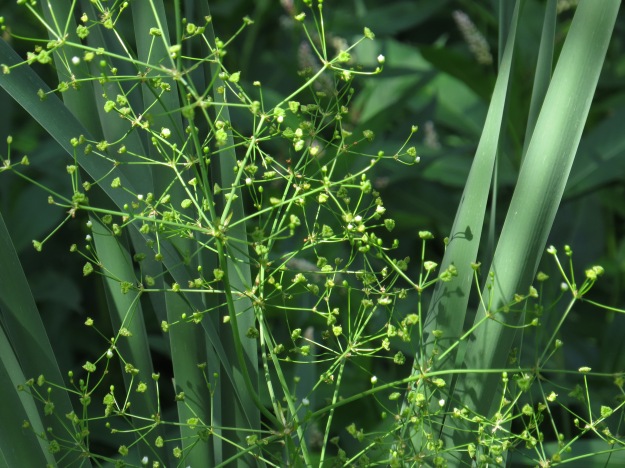 Dear Readers, just before the heatwave finally broke I went for a walk in Coldfall Wood with my friend J, and noticed this extraordinary seedhead projecting above some elegant, long-stemmed leaves. How delicate water plantain is! It is growing in the now dried-up bed of the seasonal pond, where the water level has gone up and down by several feet in the past few months. At the moment the pond bed is a mass of bistort and water mint, with the water plantain and some bulrushes providing a bit of height. This is a far cry from the scene in January.

The seasonal pond in Coldfall Wood in January this year

I have just missed the main flowering of the water plantain, but the flowers are tiny, pinkish-white, and usually only open after midday. There is something rather Sputnik-like about the arrangement of the flowers on their spikes, and the closed buds resemble clenched fists. All this reminds me of the social realist Russian paintings of the Soviet era, and indeed there is a Russian connection. Water plantain is native to most of Europe and Asia and northern and central Africa, but in Russia the powdered root is said to be a cure for rabies, giving the plant the alternative name of ‘mad dog weed’. In some parts of the world it is also said to be a cure for snakebite.

It is said to be anti-allergenic and protective of the kidneys and urinary tract.

The crushed dried leaves (to avoid the problems of blistering mentioned earlier) have been used as a poultice to relieve pain during breast-feeding in both humans and other mammals, and in Chinese Traditional medicine (where it is known as Xe Zie) it is believed that the plant can help with all aspects of fertility and childbirth.

The plant is not closely related to plants such as ribwort plantain but is a member of the Alismataceae or water-plantain family. In addition to its place in Russian medicinal lore, it is known as ‘Leaf of Patrick’ in Ireland, and is reputed to ward off fairies. The leaves are, however, said to cause blisters if bruised. The genus name Alisma is said to come from the Celtic word for ‘water’.

Ruskin took an interest in the ratio of the flower stalks of water plantain to one another, and used this to illustrate his theory of Gothic architecture. He also believed that the curve of the water plantain leaf represented a model of ‘divine proportion’, one of those shapes on which ‘God has stamped those characters of beauty which He has made it man’s nature to love’. 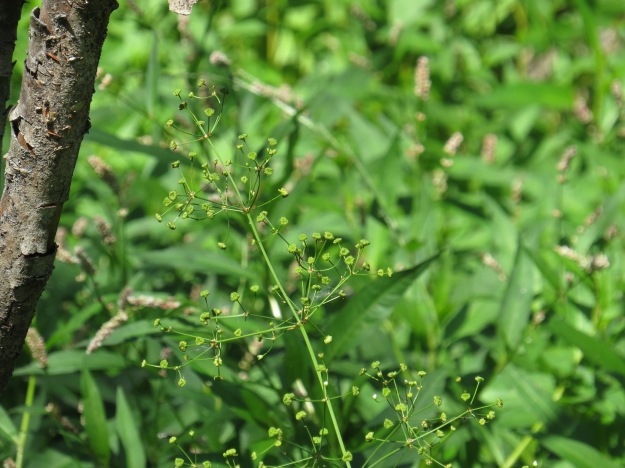 Water plantain have been used as food by the Kalmucks of Russia and China, who boiled the roots to get rid of the bitterness and toxicity of the plant. The Iroquois of North America drank a tea made from the leaves to give them extra energy (the plant is widely naturalised in the New World).

Now, at this point I normally share a poem, or a painting, but this week I want to share something completely unrelated to water plantain. As my friend and I left the pond and headed up through the wood towards home, our eyes were drawn to a tiny heart-shaped plaque at the root of a tree. When I read what was written on it, I was instantly drawn back to the pet funerals of my own childhood. I often roped in my unfortunate little brother – once we had a ceremony for a moth that had died after hatching from its chrysalis and being unable to find somewhere to expand its wings properly. I well remember that we buried it in a matchbox under a fragment of bathroom tile, upon which was scrawled, in purple crayon,

‘Died before he could live. RIP’. 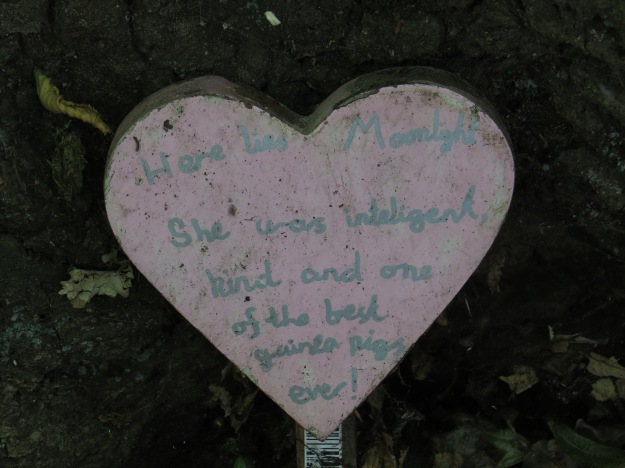 RIP Moonlight. And blessings on the child who loved her pet enough to bury here in the woods. Grief is grief, and who is to say that the death of an animal is trivial?  I have had my own heart broken often enough, and so, I suspect, have many other people.