Dear Readers,what a week it’s been! As you may remember, Mum was finally admitted to hospital last Friday with what we thought was an infection. However, once she’d had a CT scan it appeared that something more sinister was going on. She seemed to have an obstruction in her digestive tract, and for a few terrifying days we were afraid that she might have to have an operation to remove whatever was causing the blockage. In her weakened state, and given her medical condition, this was the last thing that anyone wanted.

Mum gave her consent to the operation if it proved to be necessary, but was extremely indignant that she was asked if she wanted to be resuscitated if anything went wrong.

‘Of course I want to be resuscitated!’ she said to me later as she told me about the encounter.  ‘After all, I haven’t got anything else wrong with me!’

Well, this is open to question, but who wouldn’t admire such a fighting spirit?

Fortunately, the surgeon took a look at  the scan and decided to play a waiting game. And so poor Mum was Nil by Mouth from last Friday until Wednesday this week. I took the train to Dorset County Hospital to see how she was getting on, and she was seriously disgruntled.

‘I’m never coming to this hospitall again’, she said.. ‘I’ve been sitting in this chair all day, and they won’t let me get back into bed’.

I tried to explain that this was because they were trying to ease the pressure sore on the small of her back, and also that they were going to bring her a cup of tea which she couldn’t drink laying down, but to no avail. When Mum has a bee in her bonnet it’s normally a pretty large bee.

And then yesterday we were delighted to learn that what had appeared to be a blockage was actually the result of a chemical inbalance, probably because of her infection, dehydration and various other factors. She is now eating ice-cream and yoghurt and drinking tea, and seems well on the road to recovery.

On the other hand,  at the moment she is also completely unable to bear any weight on her legs. Maybe this is just weakness after the infection, or maybe it is some new ‘thing’, because no sooner has one thing been knocked on the head than something else puts in an appearance. It’s like some game of medical Whack-a-mole.

However. I have been at home for a few days, have caught up on my sleep, have applied unguents to the horrible stress-related rash that was turning me into the Elephant Woman, and have had time to wander around the garden and admire all the things that are popping up that I’ve had nothing to do with planting at all.

Dear Readers, I  am something of a ramshackle gardener at the best of times. When a new plant first appears in the garden, I am loathe to just pull it out until I know what it is, and sometimes identification takes a while. However,  such tardiness can breed the most spectacular results with regards to wildlife.

Take the bittersweet (Solanum dulcamara) that is clambering all over my fence, for example. This year it has grown into a splendid vine and has flowered for months, producing great bunches of bright red berries which the birds may or may not be interested in later in the year. The plant is outcompeting my honeysuckle, and has already defeated a clematis. But what can I do? It is literally abuzz with common carder bumblebees, who buzz-pollinate the flowers. There are at least a dozen of them at a time and their high-pitched buzzing the very sound of summer for me.

The superabundance of bees and other pollinators means that the vine is also studded with spiders. Most of the arachnids are not big enough to cope with a full-sized bumble at the moment, and so when a bee flew into the web of a garden spider earlier today, the spider rushed over and cut it loose before the bee could completely destroy all the hard work that went into making it.

Incidentally, the appearance of garden spiders that are big enough to notice means that summer is ripening into autumn. Earlier in the year there are just as many spiders but they are tiny, so they escape our gaze.

Another surprisingly effective wildlife plant is Great Willowherb (Epilobium hirsutum). Again, this just popped up around the pond without so much as a by-your-leave. I have cut it back a bit this year, but it is still vigorous and extremely popular with the bees and butterflies. Round about now the seeds are starting to appear, and I should really blitz it before I have hundreds of seedlings all over the garden, but I don’t have the heart while most of the plants are so pretty and in full flower. 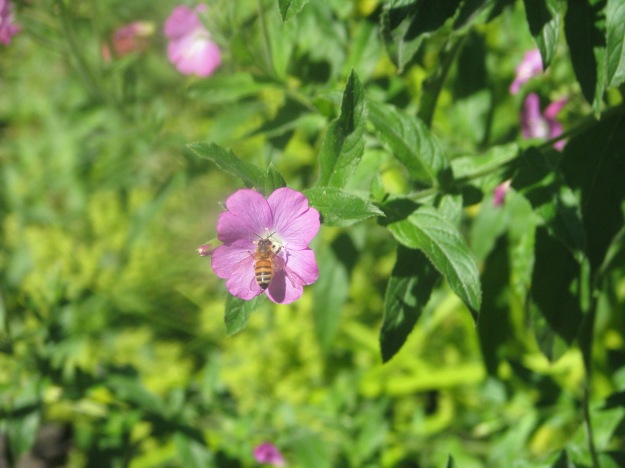 I have already waxed lyrical about the bird-planted sunflowers and their value to pollinators, so I will not repeat myself here. Suffice it to say that, like many daisies, it is useful for all kinds of bees and hoverflies, and those huge flowers will be useful for finches later on. 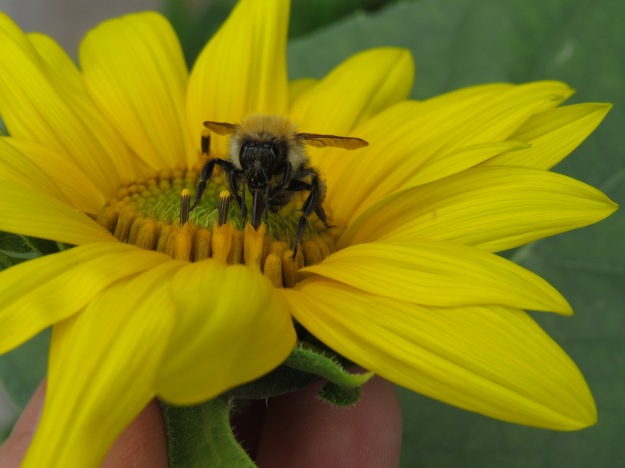 Last year, the birds were kind enough to plant some flax, which is not only exquisite in its own right, but valuable for small flies too. This year it was the sunflowers. Who knows what they’ll plant next year?

But the largest plants that have appeared from nowhere in my garden, and the ones that are the most useful of all my ‘weeds’ are the two twelve-foot high buddleias in the front garden. Why the most useful? Because my back garden faces north, and so is only insect-friendly for part of the day, whereas the front garden faces south and so is thronged with bees and butterflies all day.

In  order to be friendly to the neighbours I cut the buddleia back as soon as it starts to encroach on the pavement, which means that it flowers for much longer than normal. This year, they came into bloom at the start of July and are still full of flowers in late August. Many different kinds of pollinators use it during the day, and at night it’s full of moths.

The buddleia a few years ago. It’s much bigger now!

Finally, even non-flowering plants that appear in the garden can have their uses. By the side of my pond there is a large pendulous sedge. These can be something of a pest as they self-seed everywhere, but they are extremely useful as cover for newly-emerging baby frogs, and adult frogs seem to enjoy their protection too. 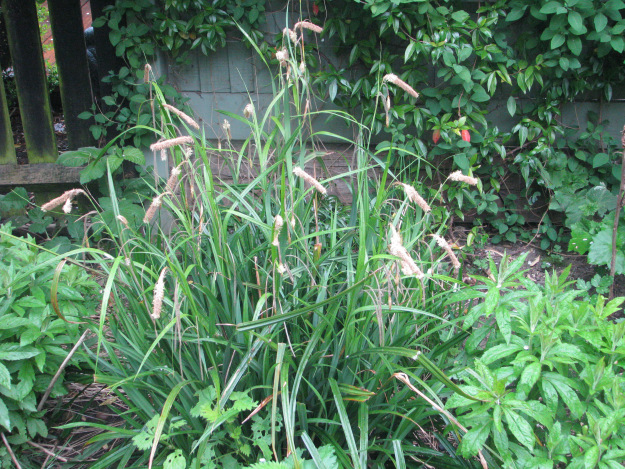 Of course, not every plant that I tolerate in the garden reciprocates my good manners. I should not have been so kind to the herb bennet, for example, which is now absolutely everywhere. The brambles in the very back of the garden are now arcing over into the seating area, looking for somewhere to root. And the bindweed is becoming positively impudent. But on balance, there is something to be said for being generous when a stranger pops up in the garden. After all, it is often a plant ideally suited to the conditions that you’ve created, something that will thrive when the expensive item that you bought at the garden centre will pull up its roots and go south as soon as you turn your back. If it isn’t Japanese Knotweed or duckweed, I’d say give it a chance. You never know which creatures will crop up to take advantage of it.

11 thoughts on “The Accidental Garden”