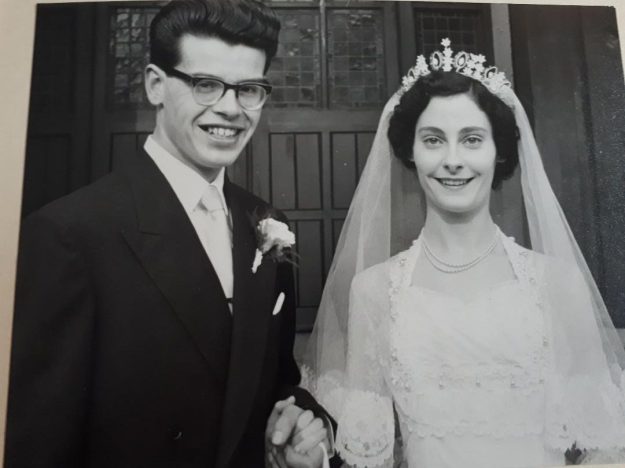 Mum and Dad on their wedding day 61 years ago

When I last reported on Mum and Dad’s progress, they had just moved into a nursing home, and Mum in particular was raging about what she considered her incarceration. It was a dreadful time. We didn’t have the care in place to send her home, and she was so ill that no amount of care would have been enough, but she was determined not to settle at the nursing home. On one occasion she called the police to get her out. She fought with the staff about everything from taking her medication to having a bath.

It is no exaggeration to say that I was in despair, though I was also secretly proud of her. She has a long tradition of being defiant. If there was a complaint to be made at a restaurant, or if an unfortunate scammer rang up to try to get her credit card details, she was ready for the challenge. One man who insisted that he was from Sky Television and wanted Mum to divulge her bank account number ended up calling Mum a ‘very nasty woman’ and putting the phone down in high dudgeon. Given her track record, there was no way that my mother was going ‘gently into that good night’.

Gradually, she got to know some of the nurses and to accept care from them. But it wasn’t long before Mum was sick again. She has an ailment called a pseudo-blockage, in which the whole of her digestive system comes to a halt, causing nausea, stomach pain and bloating. Sometimes this is a result of another disease such as cancer, or diverticulitis, or Parkinson’s disease, and sometimes it’s just a result of old age. Mum had five days in hospital, at the end of which time the hospital said that they could do nothing more for her, and that she was too frail for any investigative tests. She was sent back to the nursing home, and I went to visit her.

I saw one of the carers who had previously tried to look after Mum when she was at her feistiest.

‘She’s like a different woman’, said the carer. ‘She’s totally prepared to let me look after her now’.

The carer squinted and considered.

I went in to see Mum. Her head was bent to one side like a bud on a stalk. She was complaining about a head ache, and said that her arm hurt, and her neck hurt.

The nurse gave her some oral morphine. They were planning to use a morphine patch if Mum’s condition came back, which the hospital had assured them it would. And so, without even noticing, we were now into palliative care, which treats the symptoms of the severely ill whilst recognising that they will never get better.

Mum was still fairly lucid, but she was in pain. The doses of oral morphine came closer and closer together. There was talk of a patch that released morphine into the blood stream.

At one point, Mum opened her eyes and said

‘Someone is helping me’.

‘I don’t know’, said Mum, and closed her eyes again.

On Monday I get a call telling me that the pseudo-blockage has come back, that Mum is in increasing pain and that they are going to start Mum on a syringe driver that releases a regular amount of morphine directly into her bloodstream. The nurse tells me that this usually indicates that we are talking about weeks of life left, not months. It could even be days, though it’s difficult to say for sure.

On Wednesday I jumped onto the train to go to Dorchester to spend a few hours with Mum.

Mum hasn’t really eaten solid food since mid-July, and her face is returning to the planes and angles that it had when she was a young woman. Her skin is stretched thin over her cheekbones, and her cat-green eyes have a kind of febrile light, when they are open. Her mouth has fallen in and the nursing staff are using big, lemon-scented cottonbuds impregnated with glycerine to keep her lips and tongue from cracking. They wash her, and offer her milk which is the only food left that she can tolerate. They are like handmaidens caring for an elderly priestess. There is something stately about Mum now, something ancient as if carved out of stone.

At first, Mum is groaning, and Dad is trying to interpret the noises that she is making. The nurses come in to replace her morphine syringe and gradually the groaning stops. When Dad goes for lunch, I have a chance to sit and hold Mum’s hand.  I see her take three or four breaths and then pause for what seems an interminable time before taking the next one. I can  see the vibration of her labouring heart beneath her nightshirt.

People talk about a dying person ‘letting go’ or ‘giving up’, but it seems to me that what is going on is a tussle between the different parts of person, with some systems closing down and others wanting to hang on. It is complicated, this business, and different for everyone. It seems like hard, private work.

She squeezes my hand, though it could just be a spasm.

I tell her that I’m going to feel pretty bloody silly if next time I come in, she’s running around the room.

I cry a bit. And then all is peaceful again.

A week ago, Mum said ‘I love you’.  She said it twice. These might be the last words that I ever hear from her, because I sense that she is labouring away in some place too deep for words. But whatever happens next, those words will be enough.