Dear Readers, this week I had a lesson in ‘seizing the day’. Last week I spotted a patch of pink sorrel in bloom in a front garden in Muswell Hill . I hadn’t seen it around here before, though it isn’t an uncommon plant.

Well, the days went past and when I revisited on Saturday not only were the flowers gone but the house owner was cheerfully pulling the plant up because ‘it gets everywhere’. Still, there were some leaves left and I find them very sweet, with their three sets of hearts joined in the middle. Those leaves are a sign that the plant is a member of the Oxalidaceae, or wood sorrels – we have already met one member of the family, procumbent yellow sorrel (Oxalis corniculata) and I hold out hope for my favourite plants, wood sorrel (Oxalis acetosella).

Incidentally, although the plant is known as ‘pink shamrock’ in some places in the UK, it is not closely related to the ‘true’ shamrock, which is a variety of clover.

Pink sorrel comes originally from South America, and made its debut in the UK in a garden setting in 1870. By 1912 it was off and running. As it reproduces by a variety of methods, including seeds, runners and bulbils, it is often introduced to gardens in the compost surrounding other more desirable garden plants and vegetable seedlings. As the plant is acid-tolerant it can also thrive in areas where other flowers find it difficult to get a foot (root) hold. I can see that it could rapidly run amok, but when you see it in bloom it’s difficult to be deeply annoyed with it.

Oxalis in flower (Photo One)

You might wonder why this delicate woodland species is called sorrel, when there is also a heftier plant that shares the name (Rumex acetosa). The reason is that the leaves of both have a lemony taste, and the word ‘sorrel’ comes from the Germanic word ‘sur’, meaning ‘sour’. One alternative name for sorrel is ‘sour grass’. Lots of people seem to eat the plant, in salads, as a stuffing, or, as here, as the basis for a refreshing drink. If you do eat it you could be doing yourself a favour: the leaves are also rich in Vitamin C, and one species, known as ‘scurvy-grass sorrel’ (Oxalis enneaphylla), was eaten by sailors in South America to prevent scurvy. 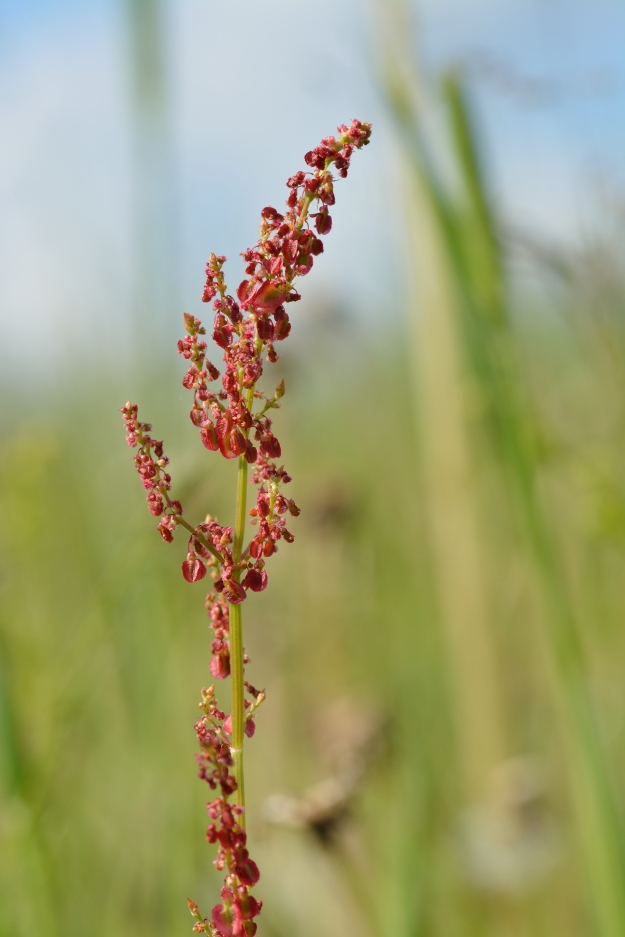 A  Bolivian species, Oxalis tuberosa has particularly tasty and swollen roots, known as ‘Oca’, and eaten in a manner similar to Jerusalem artichokes (though hopefully without the somewhat windy side effects).

Part of the reason for the ‘refreshing’ flavour of the leaves and flowers is the presence of oxalic acid, for which the genus is named. Lots of plants contain this compound, including spinach, rhubarb and broccoli, and, while it is toxic to humans you would need to eat a huge amount of the leaves in order to experience any ill effects. In fact, crystals of calcium oxalate used to be extracted from the plant for medicinal purposes, and also to produce a salt with a lemony flavour, known as ‘sorrel salt’.

Some species of Oxalis are apparently strongly attracted to copper in the soil, and a Ming Dynasty text from 1421 describes how dispersing the seed of the plant over a wide area would give an indication of where deposits of the mineral could be found.

According to the Doctrine of Signatures, plants in the Oxalis family are good for the heart because of the shape of those leaves.

And now, a poem. This one has a only passing mention of Oxalis, but I loved it so much that I wanted you to have a chance to read it too. The man to whom it is dedicated, Czeslaw Milosz (1911 to 2004), was a Polish poet who also saw himself as Lithuanian and a man instrumental in helping Jewish people in Nazi-occupied Poland  (for which he received the medal for ‘The Righteous Among the Nations’ in Yad Vashem, Israel). He won the Nobel Prize for Literature in 1980 and wrote extensively against totalitarianism and prejudice. When he died, there was resistance to his being buried in Krakow Cathedral because of, among other things, his support for the rights of gays and lesbians. In other words, he was a man of conscience who used his writing and his life to support what he felt was right.

The poet Robert Hass is no slouch himself, having translated Milosz’s work, along with that of the Japanese haiku masters Basho and Issa. I love this poem for its breadth, and for the moments of stillness that it contains, much as after a haiku, there is a kind of opening, a silence.

The fog has hovered off the coast for weeks
And given us a march of brilliant days
You wouldn’t recognize-who have grumbled
So eloquently about gray days on Grizzly Peak-
Unless they put you in mind of puppet pageants
Your poems remember from Lithuanian market towns
Just after the First World War.  Here’s more theater:
A mule-tail doe gave birth to a pair of fawns
A couple of weeks ago just outside your study
In the bed of oxalis by the redwood trees.
Having dropped by that evening, I saw,
Though at first couldn’t tell what I was seeing,
A fawn, wet and shivering, curled almost
In a ball under the thicket of hazel and toyon.
I’ve read somewhere that does hide the young
As best they can and then go off to browse
And recruit themselves.  They can’t graze the juices
In the leaves if they stay to protect the newborns.
It’s a glitch in engineering through which chance
And terror enter on the world.  I looked closer
At the fawn.  It was utterly still and trembling,
Eyes closed, possibly asleep.  I leaned to smell it:
There was hardly a scent.  She had licked all traces
Of the rank birth-smell away.  Do you remember
This fragment from Anacreon?-the context,
Of course, was probably erotic:  ” . . . her gently,
Like an unweaned fawn left alone in a forest
By its antlered mother, frail, trembling with fright.”
It’s a verse-you will like this detail-found
In the papyrus that wrapped a female mummy
A museum in Cairo was examining in 1956.
I remembered the time a woman in Portland
Asked if you were a reader of Flannery O’Connor.
You winced regretfully, shook your head,
And said, “You know, I don’t agree with the novel.”
I think you haven’t agreed, in this same sense,
With life, never accepted the cruelty in the frame
Of things, brooded on your century, and God the Monster,
And the smell of summer grasses in the world
That can hardly be named or remembered
Past the moment of our wading through them,
And the world’s poor salvation in the word.  Well,
Dear friend, you resisted.  You were not mute.
Mark tells me he has seen the fawns grazing
With their mother in the dusk.  Gorging on your roses-
So it seems they made it through the night
And neither dog nor car has got to them just yet.