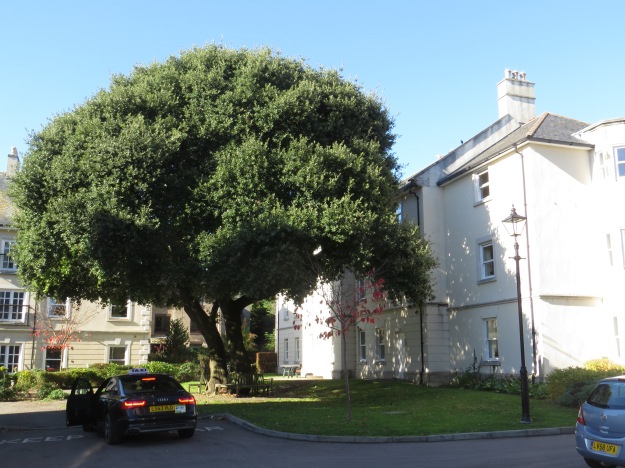 Dear Readers, a pair of stately holm oaks stand outside Dad’s nursing home in Dorchester. I remember being surprised by them on the very first day that Mum and Dad arrived, and thinking that I had never seen an evergreen oak before. Little did I know that the south west of England is a hotspot for this plant. It comes originally from the Mediterranean, and was one of the southern European trees planted on the Mamhead Estate in Devon by Sir Thomas Balle, who also introduced ‘cork, ilex, wainscot, oak, Spanish chestnut, acacia, and other species of exotic trees’ (Britton and Bayley ‘The Beauties of England and Wales’ (1803)). It is now seen as a dangerous alien invader which is accused of damaging biodiversity. In theory, it is not fully frost hardy, and so shouldn’t be able to get too far north. However, with climate change it has recently popped up as far north as Cumbria.

There is a high concentration of holm oaks around St Boniface Down near Ventnor in the Isle of Wight, and on the coastal sand dunes near Holkham in Norfolk. Both of these are vulnerable habitats but, as the acorns are spread by jays, rooks and grey squirrels, who bury them to provide sustenance during the winter, it’s difficult to see how they can be completely controlled. The big danger is in that extensive, evergreen canopy, which shades out other plants. There is, however, a DEFRA plan in place to keep an eye on the spread of the species and to take action as necessary. In ‘Alien Plants‘ by Clive Stace and Michael Crawley, it’s noted that holm oak also spreads along the side of railway lines, probably being buried in the soil of the embankments by those pesky squirrels.

There are also two holm oaks featured in ‘The Great Trees of London‘ by Jenny Landreth, one in Fulham Palace Gardens and one in Valence Park in Beacontree, not far from where I used to live.

There are two subspecies of holm oak: one has bitter acorns, and grows from northern Spain and France to Greece, and the other has sweet acorns and grows in southern Spain and North Africa. These can be very long-lived trees: the ones on the Mamhead Estate are still there after over two hundred years, and there is a grove of the trees in Malta that are said to be between 500 and a thousand years old. The tree can grow to massive size, with one in County Wexford in ireland being over 20 metres tall with a spread of 43 metres. These are fine trees, with dense shade from the holly-like leaves (which is what gives the tree its name – ‘holm’ is an old word for ‘holly’). I imagine that people will enjoy sitting on the seat under the pair beside the nursing home once the weather gets warmer. As the nursing home used to be a maternity hospital, I can also imagine people pushing their prams into the welcoming coolness of the shade. 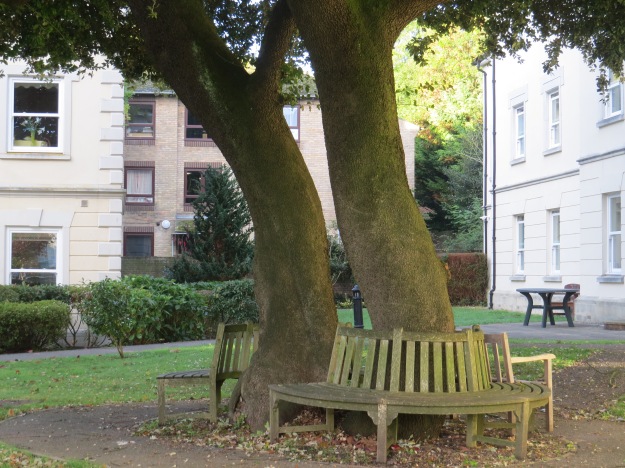 In its native regions, holm oak is one of several trees that are used in the creation of truffle orchards or truffieres. The tree has an association with the mycorrhizal fungus which produces truffles as its fruiting body, whilst the fungal ‘roots’ help to increase the amount of moisture and nutrients that the tree can extract from the poor, drought-prone soil that it grows on. Back in 1790 a Frenchman named Pierre II Mauleon decided to try planting acorns from oak trees which were known to have hosted truffles. It takes some 7-10 years for the fungus and the tree to establish themselves, but Monsier Mauleon was patient, and his experiment was eventually successful. In the nineteenth century, much of the area where the Phylloxera virus had destroyed the grapevines was turned, instead, to truffle production.  Today, truffles are grown in many parts of the world, although the connoisseur considers that the Perigord truffle is the best of the bunch. Personally, I find that a little truffle goes a very long way (which is just as well considering how expensive it is).

The acorns from holm oak are food for the free-range black Iberian pig, and is said to be one of the elements that flavours their meat. Jamon iberico, a distinctive ham, can be produced only from this breed of pig, and is always produced from wild-foraging animals.

The wood from holm oak is hard and tough, and has been used in the manufacture of everything from wagons (as described by Hesiod back in 700 BCE ) to wine vessels. It is also used for charcoal and firewood in its native range.

Holm oak is also very amenable to being used for hedging, and for pruning into formal shapes. The Armed Forces Memorial in Staffordshire is surrounded by 50 holm oaks which have been pruned into cylindrical shapes, echoing the tumulus-like design of the memorial itself, which honours over 16,000 servicemen and women who have been killed in the line of duty since the end of the Second World War.

It is, of course, impossible for me to divorce this particular tree from the memories that I have of the nursing home, of Mum’s last days and of my Dad’s rapidly deterioration due to vascular dementia. The two trunks remind me of what a pigeon pair Mum and Dad were, and how lost Dad often seems without her. And so, this poem by Stevie Smith, included in her final collection before her death, seems particularly fitting, in its simplicity and lack of sentimentalism.

Grave by a Holm Oak

Where have the dead gone?
Where do they live now?
Not in the grave, they say,
Then where now?

Tell me, tell me,
Is it where I may go?
Ask not, cries the holm-oak,
Weep, says snow.