Dear Readers, many moons ago I was treasurer for a community garden in North London. We had received some money to make a ‘dry’ (drought-tolerant) garden and we were discussing what to plant.

‘We could go for a Mediterranean theme, with some oleanders’, said one innocent soul.

Everyone around the table positively hissed. Heads were shaken, sighs were uttered and I could  imagine people making a mental Sign of the Cross to fend off the evil of the suggestion.

‘Don’t you know’, she whispered, ‘that oleander is deadly poisonous! Think of the children!’

And that, dear readers, was the end of that. So I gave oleander very little thought until I saw it poking its head under a hedge in the County Roads today. Is it really as poisonous as everyone thinks?

Well, according  to our old friend ‘The Poison Garden’ website, it is a candidate for ‘the most poisonous plant in the garden, but also the most beautiful’. The website contains the sad story of a giraffe who died after being fed oleander clippings at Tucson Zoo, and also the story of Fudgie, a miniature cow who nearly died after eating the plant, but who survived in spite of having her heart stop twelve times during the time it took her to recover. Every time her heart stopped the vet or toxicologist would apparently restart it by kicking her in the chest, which seems a bit drastic but at least it worked.

Oleander also caused the deaths of two toddlers adopted from a Siberian orphanage and living in California. In their previous lives, the children were said to have had malnutrition, and to have developed pica, a habit of eating inedible objects in order to assuage their hunger. They ate some oleander leaves in spite of the extremely bitter flavour, and both died. Oleander affects the stomach, central nervous system and heart, and 100g is enough to poison an adult horse. Victims of oleander poisoning may be treated with activated charcoal to absorb the toxins and may need to be put on a pacemaker to keep the heart steady during the recovery period.

As if this wasn’t enough, the sap of the plant can cause skin and eye irritation.

In other words, it probably wasn’t the best choice of plant for a community garden frequented by small children.

There is little doubt that this is a very pretty plant, often scented and available in a wide variety of colours. It is part of the dogbane family (Apocynaceae) which also includes the almond-scented frangipani and the periwinkle or Vinca. The family is largely tropical, and many species are poisonous (the Latin name may refer to ‘dog poison). Although we associate it now with the Mediterranean it has been cultivated for so long that no one really knows where it comes from, though south-west Asia has been suggested as a starting point. In their ‘native’ habitat, oleanders grow in stream beds which alternately flood and dry up, and so although the plant is drought-tolerant it also seems resistant to waterlogging.

Small wonder, then, that it has been extensively planted in some parts of the US where these conditions are not unusual – it was used following the devestating 1900 hurricane in Galveston, Texas, and Moody Gardens in Galveston is the home of the International Oleander Society, dedicated to the development of new varieties and the preservation of existing ones.

The first oleander planting in Texas (Photo One)

When it comes to wildlife benefits, oleander is a bit of a mixed bag. Its toxins were originally developed to deter invertebrate pests and grazing animals, and we’ve already seen what happens to the latter. However, as you might expect, some insects do prey upon the plant, and have come up with handy solutions to the poison problem. The caterpillars of the polka-dot wasp moth (Syntomeida epilais) eat only the pulp of the leaves, avoiding the more poisonous ribs. Both caterpillar and moth are stunning, and can be found in the Caribbean and the south of the United States. It is thought that they fed on a plant called the devil’s potato before oleander was introduced to the New World, but it seems that they have pretty much moved over to the ‘alien’ plant. 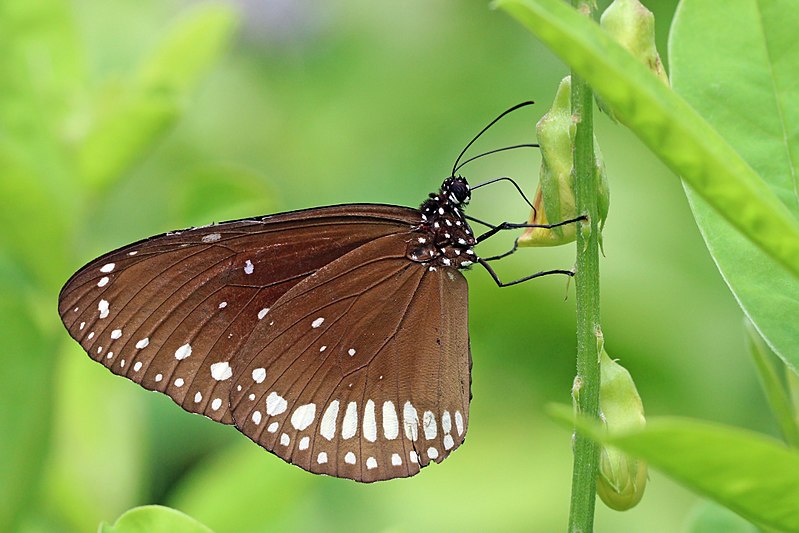 The oleander hawk moth can very occasionally be found in the UK, but it lives mainly in Africa, Asia and, surprisingly, some of the Hawaiian Islands. It migrates and this is how it sometimes ends up in Europe, though it more commonly finishes its journey in Turkey.The caterpillars can grow to almost nine centimetres long, and are a flourescent lime-green colour, again a mark of confidence that no one is going to eat you.

So, the oleander can be food for a subset of invertebrates who have learned to deal with its toxicity. However, although the flowers look inviting, it’s thought that they are not actually useful for pollinators because they are nectarless, and the blooms receive very few visits from insects, who won’t bother to return often for no reward. The plant does require insect pollination, however, and so to compensate it produces extremely sticky pollen, which allows many flowers to be pollinated from one visit. Nectar is an expensive resource for a plant to produce, and so oleander has found a way of getting insects to visit without ‘paying them back’.

Oleander has cropped up in the work of many artists. Klimt featured it in his ‘Two Girls with an Oleander’ painted in 1892 and rather more naturalistic than his better known ‘gold’ paintings, such as ‘The Kiss’.

My old favourite Vincent Van Gogh painted oleanders when he was staying in Arles in 1888 – he loved the plants because they were ‘joyous’ and ‘life-affirming’.

Oleanders were a popular subject in the frescos and murals of Rome and Pompeii, and so it’s no surprise that the Victorian Orientalist Sir Lawrence Alma-Tadema should incorporate them into many of his paintings of classical antiquity.

So, this is a plant that has fascinated people for millenia. Poisonous but beautiful, with flowers that deceive, it is tough enough to survive drought and flood. Its ability to cope with disaster is nowhere clearer than in Hiroshima, where it was the first plant to bloom after the atomic bomb destroyed the city and is the symbol of the city to this day.

Oleander flowering near the Genbaku dome in Hiroshima (Photo Seven)

And this week, something different. I found this article in The Atlantic magazine, and it is about the way that different cultures use language in war situations in order to cope with the situations that they find themselves in. In the Israeli army, “We have two flowers and one oleander. We need a thistle.” translates as ‘We have two wounded and one dead. We need a helicopter.” It’s a fascinating read. See what you think!  It seems to me that, wherever we come from, we need to find a way of describing the indescribable.

“British soldiers in the field also refer to dead comrades as “T4,” Campbell told me, and to the badly wounded as “T1,” identifying the people in question over the radio never by their names but by a mix of letters and serial numbers. “So it’s ‘Charlie Alpha 6243 is T1,’ not ‘Tom’s lost his legs,’” Campbell said. “You need the jargon so that an 18-year-old can say it and not be overwhelmed by what he’s saying. (My emphasis)” (From The Atlantic. ‘What Military Jargon Says About Armies, and the Societies that they Serve’,Matti Friedman 2016).