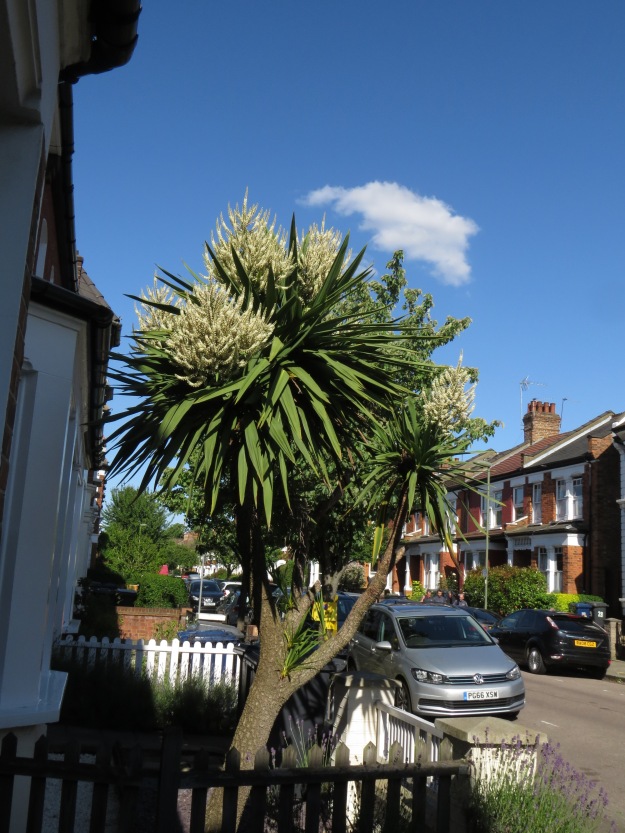 Dear Readers, the cabbage palm is a plant that I have always been a little snooty about. For much of the year it just stands there, with its big leathery leaves, and looks rather out of place. But this year, this one in the County Roads of East Finchley has burst forth with three huge inflorescences. I stood there with my camera, breathing in the sweet scent and watching dozens of honeybees flying about, and realised that I had been completely wrong. This is a very fine tree indeed.

The cabbage palm is endemic to New Zealand, where the largest known tree is estimated to be over 400 years old, and has a height of 56 feet and a circumference of 30 feet. The fruit that follows the flowers is the favourite food of the New Zealand pigeon or kereru (Hemiphaga novaeseelandiae), who is also endemic. I am fascinated by New Zealand and its unique wildlife, and I think that I shall have to visit at some point! 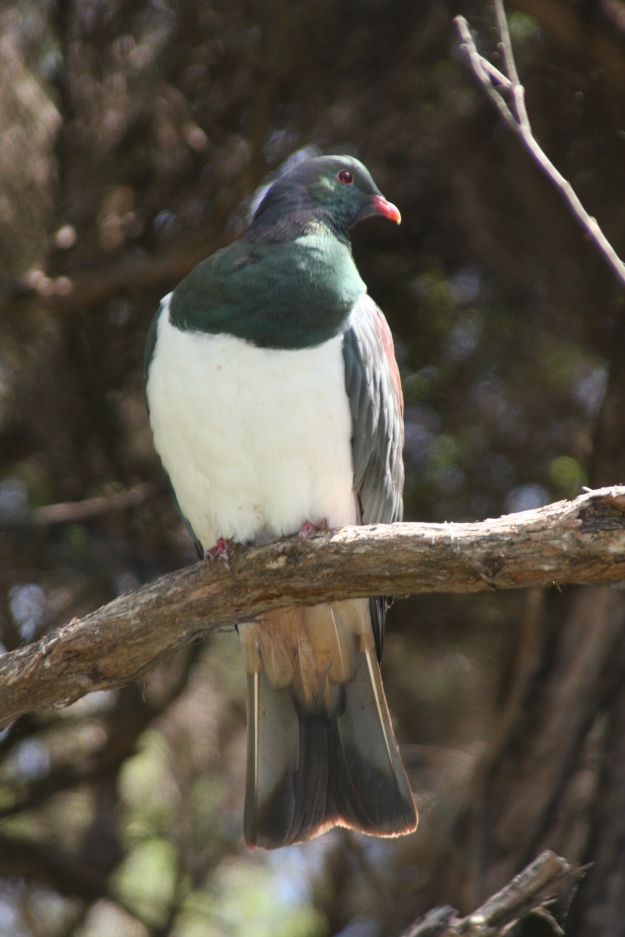 The flowers are eaten by the kakariki or New Zealand parakeet, a very attractive small parrot. I wonder if our ring-necked parakeets will start to recognise the plant as a source of food? They have certainly already developed a taste for spring blossom. 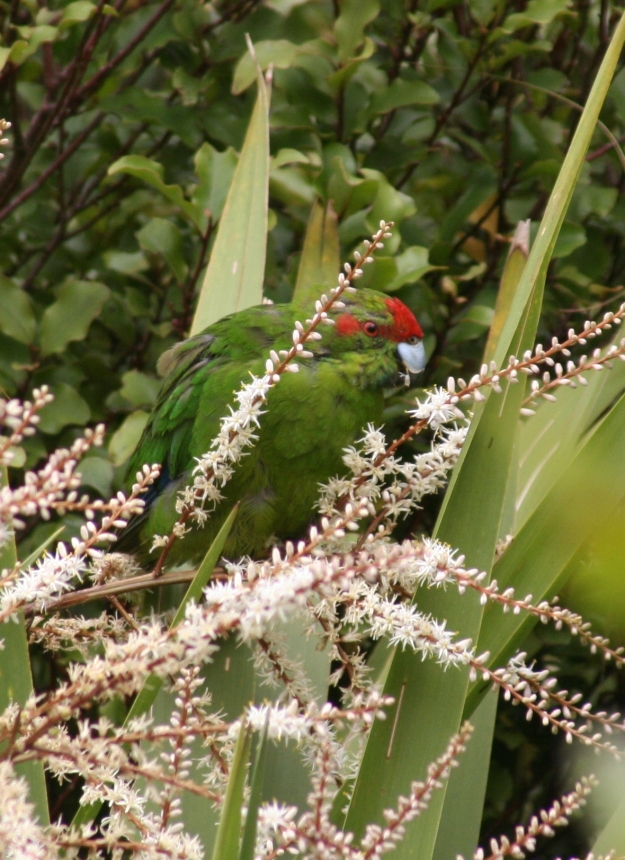 Cabbage palms grow in a variety of habitats in their native country, with different varieties occupying different niches. However, young plants are not frost-hardy (which means that it is limited as to altitude) and need open spaces to thrive – they will not survive if they are overtopped by other plants. The seedlings need a lot of water, and so the plant is not found on steep hills or among sand dunes unless there is underground water. The cabbage palm also needs fertile soil, and when European settlers first arrived in New Zealand they would use the presence of cabbage palms to indicate where to set up their farms and homesteads. This is probably why the ‘jungles of cabbage trees’ described by those settlers no longer exist – these days, cabbage palms are much more likely to be individual trees.

The nectar from the cabbage palm has compounds that make it attractive to moths as well as to bees, and I have seen our local tree surrounded by fluttery figures on a warm night. Bees use the nectar to stoke their developing hives, Each stalk on a cabbage palm bears a flower on alternate years, so there tends to be a heavy flowering every other year, and a bumper crop every three to five years. I suspect that this is a bumper year. One inflorescence can carry up to 40,000 seeds which are rich in linoleic acid (an important compound in the egg-laying of birds). Given that young plants need open space to grow well, it’s no wonder that the plant has developed to have its seeds transported away by the New Zealand pigeon, who will hopefully deposit it a good long way away from its parent (with a handy parcel of fertiliser to boot).

Much as the oak tree is a ‘mother tree’ to many British species, and constitutes a whole ecosystem in itself, so the cabbage palm is home to a whole variety of other species. Epiphytes such as orchids, ferns such as our old friend the Asplenium  and a whole fieldguide full of lichens and liverworts live on the plant.

The gold-striped gecko (Woodworthia chrysosiretica) scuttles over the bark, and New Zealand bellbirds nest under the leaves 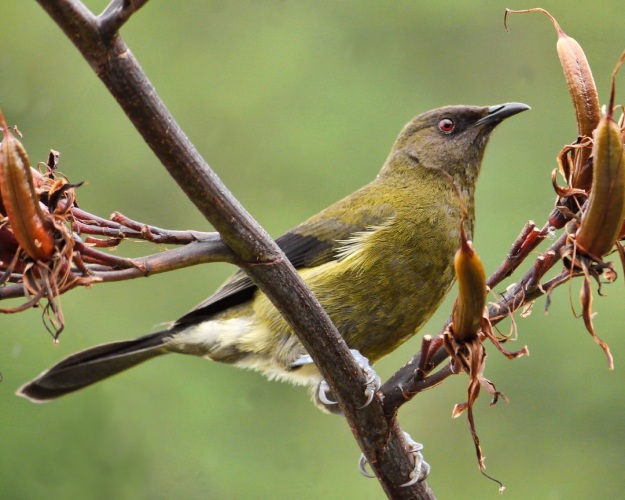 In winter the leaves are an excellent hiding-place for the weta, a giant flightless cricket and one of the largest insects in the world.

There are nine species of insects who are only found on the cabbage palm in New Zealand, including the cabbage tree moth (Epiphryne verriculata) which eats nothing else. The adult is camouflaged so that it can hide on the dead leaves of the plant. I don’t think I’ve ever seen such a stripey moth. 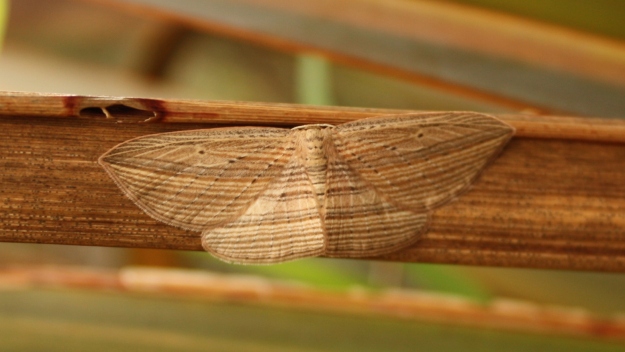 As you might expect from a plant that has been so utterly entwined with the other inhabitants of New Zealand, the Maori people have a long relationship with the cabbage palm. The stems and rhizomes are rich in natural sugars, and were steamed in earth ovens to provide a sweet substance called kauru that was used to sweeten other foods. It was easily stored for long periods, and is said to taste like molasses.

The cabbage palm groves attracted thousands of pigeons, and the Maori would trap and eat these birds – they were often so fat that they couldn’t fly.

The fibre from the leaves was incredibly tough, and especially resilient in seawater, being used to make anchor ropes and swings. They were also used to make protective trousers for when people were travelling in the high country of the South Island, home to the prickly spear grasses.

Medicinally, different parts of the plant were used for everything from diarrhoea to colic.

Children using a swing made from Cordyline fibre (Public Domain)

Although the cabbage palm rarely sets seed in the UK, individual plants do often seem to appear in the ‘wild’ – the plant is the fifteenth commonest ‘alien’ plant in London according to Stace and Crawley’s book ‘Alien Plants’. In the Isles of Scilly, the cabbage palm is used as a shelter for the bulb fields, and it is generally a plant of the milder south west of England, where it is sometimes known as the ‘Torquay Palm’. I see that there has recently been a thinning out of the various ‘palm’ trees of Torquay by the local council, with a concomitant furore. Let’s hope that all is well by the start of the summer season.

There are also cabbage palms on the west coast of Ireland, a similarly mild spot. 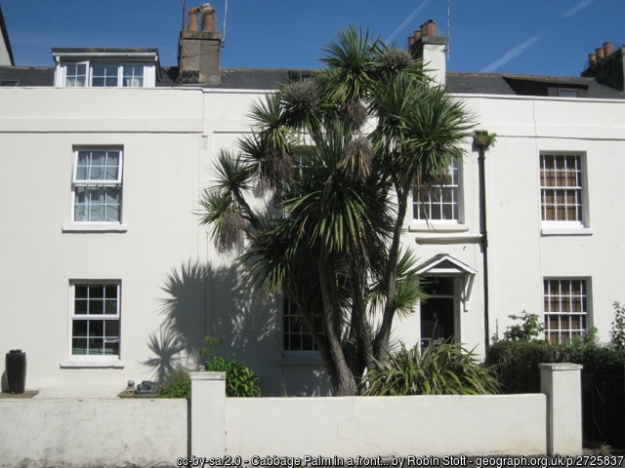 A cabbage palm in a front garden in Torquay

In its native land, the cabbage palm has been threatened by a variety of pests and diseases. In 1987, populations of the plant sickened and died, often within a year of the first symptoms being noticed. Sudden Decline was eventually found to have been caused by a bacterium transmitted by a non-native sapsucking insect, the passion vine hopper, and there is some hope that the disease is lessening. However, individual cabbage palms are sometimes victims of what has been named ‘Rural Decline’. When the forests of the plant were originally cleared, individual specimens were left as shelter for livestock. Unfortunately, said livestock ate the seedlings and rubbed against the bark, eventually damaging the tree beyond hope of survival. Rabbits, possums and even horses also have a liking for the sweet stems and fruit. The cabbage palm’s richness as a source for other organisms seems to be hastening its demise in New Zealand, though the population is still at a healthy level at the moment.

Furthermore, the cabbage palm is very widely cultivated, both as a pot plant and as ‘bedding’ in many council flowerbeds. It is strange to think that this most individual of plants, so firmly embedded in the country from which it comes, is pretty much unremarked. I am looking at the cabbage palm with much more respect these days. What a very fine plant it is! 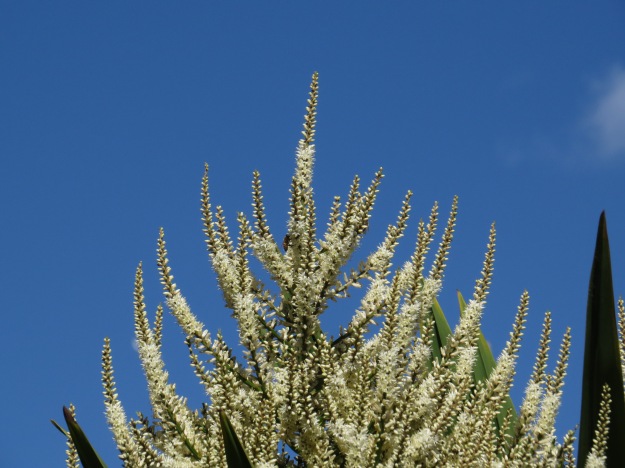 Photo One by By Duncan – originally posted to Flickr as Kereru, CC BY-SA 2.0, https://commons.wikimedia.org/w/index.php?curid=7903580