Dear Readers, today I was searching for a new weed in East Finchley Station car park. I don’t know how you spend your Saturdays, but for me a plant hunt in a relentlessly urban setting, with tube trains whistling past my ear and the steady thrum of an emergency generator forming an interesting soundscape is as close to heaven as I can imagine. This is mainly because the auditors finished their work yesterday, and although they had many, many comments, none of them related directly to anything that I’d done. Hooray! Life can resume some vestige of normality, and nothing is more normal than peering at a tiny plant and realising that, humble as it is, this is one of the most scientifically important organisms of the past century.

Thale cress is a brassica (as was our hairy bittercress last week) and on the surface of it, there is nothing much to report. It is a winter annual, with a rosette of dark green, hairy leaves, and a long waxy stem bearing tiny white flowers. The ‘hairs’ on the leaves are called trichomes, and are interesting because in thale cress, each one is a single cell.

Scanning electron micrograph of trichome: a leaf hair of thale cress (Arabidopsis thaliana), an unique structure that is made of a single cell (Photo One)

However, what makes thale cress so important is that it was the first plant to have its entire genome sequenced: its small size, short life-span and relatively simple genetic structure made it perfect as a model organism in scientific research. It also has remarkably little ‘junk’ DNA.  Because it was (relatively) easy to map the genome of the plant to its appearance and behaviour, thale cress is used for experimentation in laboratories all over the world, leading to a much better understanding of flower and leaf development, light sensitivity and circadian rhythms. In spite of being self-pollinated, the plant is also surprisingly diverse, with over 750 naturally occurring varieties world-wide, and over 40 in the UK alone.This has led to a variety of commercial applications being suggested, from increasing the speed at which oranges develop to encouraging plants to produce more Omega-3 acid – this article by Peter Marren is a fascinating look at the different ways in which this humble ‘weed’ could be used.

Of the many discoveries that were made using thale cress as a model, one of the most intriguing to me is that the roots of a plant seem to channel light to their roots, where there are light sensitive cells that need illumination in order to grow.

Thale cress has also landed on the moon – the Chinese Chang’e-4 lander brought the plant in a closed environment together with silk worm caterpillars and potato seeds. In theory, the three organisms should be a microcosm, with the silk worms producing carbon dioxide for the plants, and the plant producing oxygen, provided, of course, photosynthesis can take place.

Thale cress is named after Johannes Thal, the botanist who first described the plant in 1573. Thal discovered it in the Harz Mountains in Germany, and thale cress does seem to be another of those mountain plants that does well as a weed, surviving light, infertile soil, a high degree of exposure and risk of drought.  It is a pioneer species, and I suspect that one reason that I’ve never paid it any attention before is because it is also ephemeral – with such a short lifespan it will be here one day and gone tomorrow. It is apparently sometimes used as a salad ingredient, but presumably it grows larger in less hostile environments, because you’d be a long time picking a bowl full in East Finchley station.

I found thale cress rather difficult to photograph – my camera really doesn’t like white flowers (they nearly always end up appearing overexposed) and my knees really don’t like crouching down for too long (poor old thing that I am). But for some really splendid pictures of this humble plant, have a look at the Wildflower Finder website. To whet your appetite, here is an example: 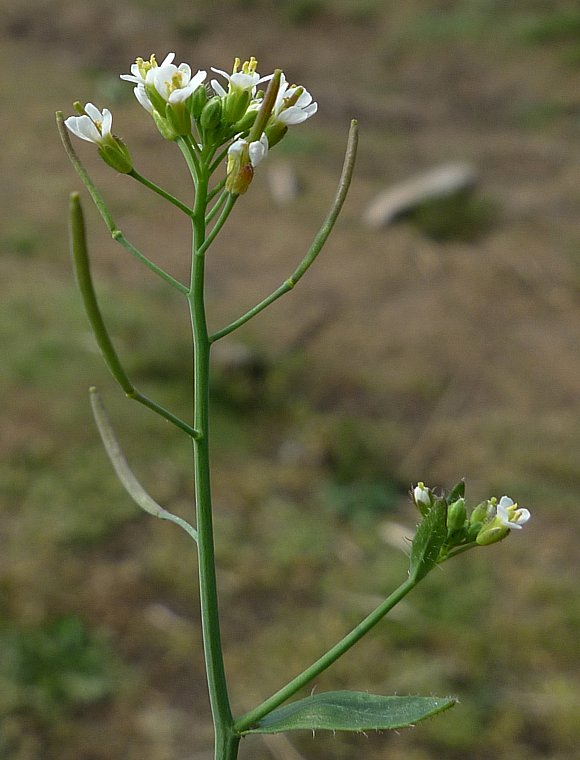 Medicinally, thale cress has been used in Indian traditional medicine to treat mouth sores and inflammation of the throat. However, scientists looking at the bacterial communities that live on the surface of the leaves of the plant have found that some of the bacteria are producing a substance that deters the growth of other bacteria – a novel antibiotic. If this proves to also be effective against the bacteria that cause disease in humans and animals, it would be a tremendous advance in the search for new methods of combatting infection. Many of our current antibiotics are becoming less and less effective as bacteria acquire immunity to them, so we need all the help we can get.

Now, thale cress is not a particularly beautiful plant. Monet preferred water lilies for some reason, and Van Gogh turned his nose up at the thale cress and went for sunflowers and irises instead. But there are some remarkable scientific photographs of thale cress, showing the intricate beauty of its structures.

How beautiful the tiny details of this plant are when viewed close up! And this is the point at which I would normally produce a poem. However, for the first time I can report that this plant actually is a poem. In 2003, a group of geneticists from Icon Genetics managed to encode a line from Virgil’s Georgics into the DNA of the line of thale cress that they were working with. The line was ‘Nec vero terrae ferra omnes omnia possunt‘ or ‘Nor can all of the earth bring forth all fruit alike‘. However, this was not a simple artistic act, but a way of copywriting the whole genetically modified organism – if it was ‘stolen’ it could be identified by the poem encoded into each of its genes. For more on this, and on the work of poet Christian Bok, who is attempting to encode a poem into a bacteria that will change and replicate as reproduction occurs, have a look here.

Thale cress is the fruit fly or laboratory rat of the plant world. It has been analysed and reorganised to produce plastic, to glow in the dark, and to produce oil . It is certainly something of a wonder plant, but while normal selective breeding (which humans have done for millenia) has limitations imposed by the genome of the organism, we are now swapping genes from one organism to another, sometimes for good, humanitarian reasons but often just because we can. I am no Luddite, but it seems to me that our technology may be running ahead of our ability to decide on the ethical implications of our discoveries. I believe that science can save us, but I also believe that we need to think through what the results of our experimentation mean. Looking at this tiny plant, so unassuming that it has taken me over six years to notice it, I wonder what other secrets it may hold, and what they will lead to. I only hope they will be used for everyone’s benefit, rather than to make profit for a few bloated corporations, naïve as that hope may be. It is long since time to cooperate rather than compete.

Photo Five by Dr Heiti Paves at Tallinn University of Technology from https://www.nikonsmallworld.com/galleries/2009-photomicrography-competition/arabidopsis-thaliana-thale-cress-1