Dear Readers, I am not the most adventurous of souls when it comes to physical peril – I admire all you bungee-jumping/parachute-wearing/white-water rafting types for your chutzpah, while simultaneously wondering why you have such a death-wish. But if you want to see the flying squirrels of Sepilok, you have to take a walk in the canopy. So it was that about ten days ago I found myself on some dodgy looking walkways rather a long way up in the sky. Fortunately they didn’t rock or sway, and it was difficult to see through to the forest floor, so I entertained myself by looking up and not wondering what the shelf-life of a rivet was when exposed to the damp and humidity of the rainforest.

And there was plenty to see. We were primed for flying squirrels: they had ‘nest boxes’ on some of the higher trees, and if you squinted you could occasionally see a little nose poking out.

In fact, some of us (ahem) were so primed that when we saw a broad-winged creature gliding through the trees beneath us, we squawked ‘flying squirrel’. Our long-suffering guide, Hazwan, took a deep breath and announced ‘Wallace’s hawk-eagle’, with only the slightest hint of reprimand. It takes some skill to mistake a feathered creature for a furry one, but there you go. 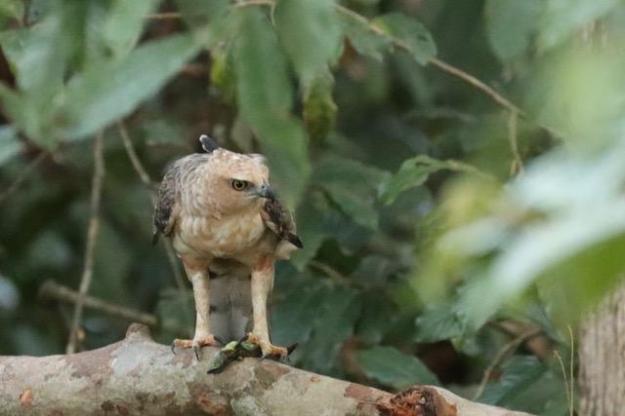 What a splendid creature this is! One of the smallest eagles, it is only about the size of a peregrine falcon. This bird flew up into one of the tallest of the trees, and then flew past us. The more sharp-eyed folk noticed that it was carrying a lizard in its talons.

Once in the tree, he was joined by his mate, and he shared the lizard with her. 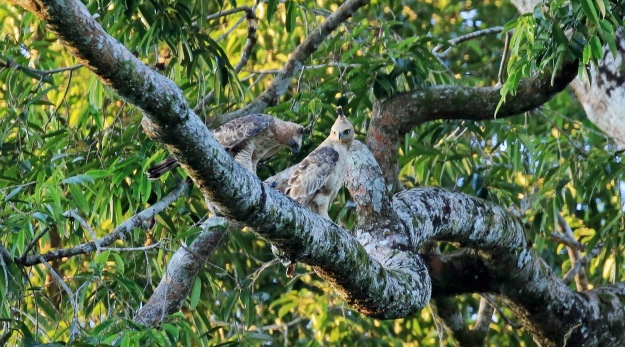 There was then a bout of noisy mating which lasted for the usual ten seconds. I sometimes think that female birds are a bit short-changed in the whole wooing business, though I believe albatrosses are somewhat less perfunctory, and at least this one wasn’t assaulted like female mallards generally are.

In the meantime we also spotted a Bornean green keeled pit viper (Tropidolaemus subannulatus). We’d seen one in the Sun Bear conservation centre earlier in the day, but it’s always nice to see another one. They are extremely varied in colouration (as you can see from the photos below). They are venomous but spend most of their time hanging about in trees waiting for their prey to wriggle or hop past (they eat lizards, frogs, small mammals and birds), and you are safe from damage unless you poke one or get within striking range with your camera. 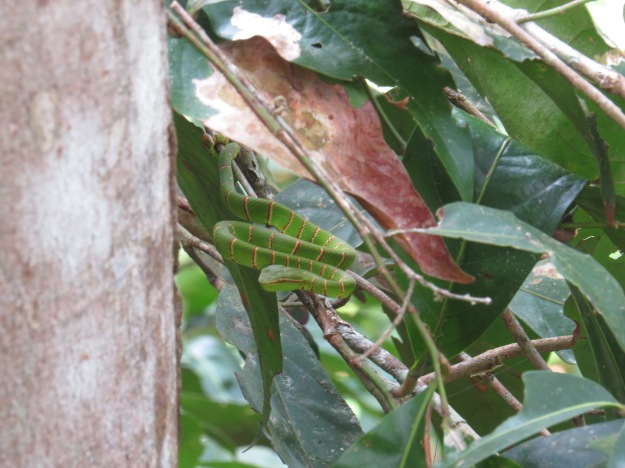 Keeled pit viper in the BSBCC

And then it was time to wait for the red giant flying squirrels (Petaurista petaurista) to wake up. We stood on the walkway, well-anointed with Deet, and as the sound from the cicadas and the frogs rose, and the light dimmed, most people fell silent. All except the two middle-aged chaps with a searchlight and enormous cameras standing next to me. They boomed and chattered on as the sky changed from orange to pink to turquoise to indigo. As the flying squirrels emerged from their nest boxes they were suddenly floodlit, like Liza Minelli at a Las Vegas concert. There’s something about those enormous eyes that remind me of said superstar too.

Red giant flying squirrels eat not only nuts and fruit, like other squirrels, but also eat young leaves and, as with the flying lizard that we saw yesterday, their gliding probably helps them to scout out a bigger area for edibles than would be available if they just jumped from limb to limb like ‘normal’ squirrels. They have a cape of fur from ankle to wrist which gives them a huge surface area, especially when you consider that these animals are almost four feet long from nose to tail, and can weigh up to 7 lbs. I met two giant flying squirrels in the Night Zoo at Singapore a few years ago, where they occupy a huge walkthrough compound. One was sitting on the branch above me, scolding his neighbour in the opposite tree. He looked about the size of a Maine Coon cat, and I thought that I had never met a more unexpected animal. It was as if Tufty the squirrel from my childhood road safety films had been inflated with a foot pump. 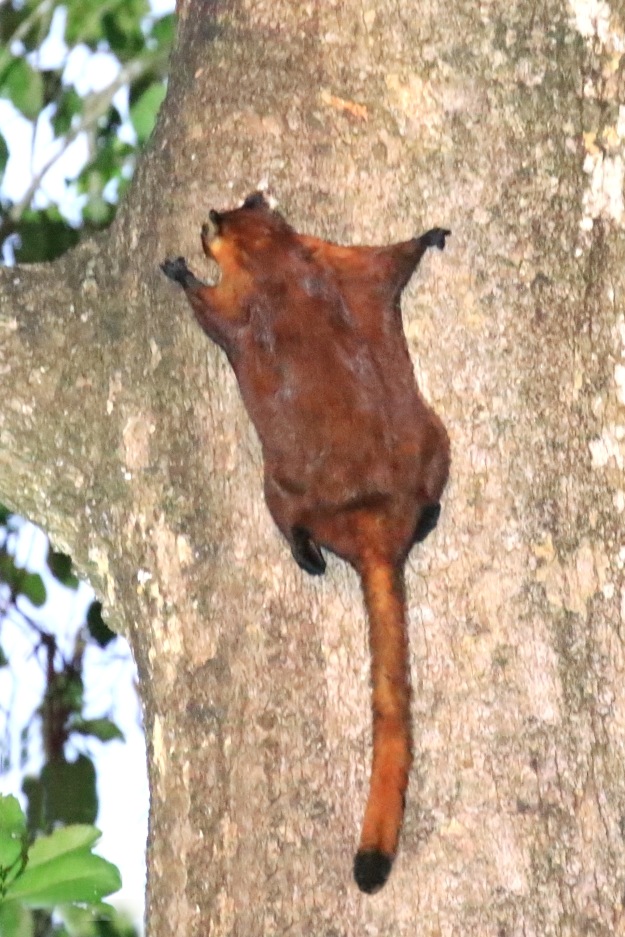 And then, one of the squirrels ‘flew’ through the trees, swooping downwards with what I thought was a remarkable resemblance to the Wallace’s hawk eagle seen previously (if you squinted). It landed on a tree about a hundred metres away and scampered up the trunk to repeat the process. I wonder what kind of mental map of their territory they have? It must be in three dimensions, unlike more land-hugging creatures who just have to worry about the width and breadth, not the height.

Having half-blinded the poor rodent, the two talkative types mentioned earlier stomped off at speed along the canopy walk, no doubt en route to damage the eyesight of some other nocturnal creature. We were lucky on our trip – even the keenest photographers in our group were kind to the animals and respectful of the rest of us. Some people seem to treat wildlife as just something to ‘capture’ on the camera, and then to move on, whereas for me it doesn’t matter so much if an animal is familiar because there is always some new behaviour to witness, something new to learn. It’s so good to deepen a relationship with a species, and this has been a trend for me as I’ve gotten older – I am no longer so stimulated by novelty. None of which takes away from the sheer joy of meeting an animal that you’ve only seen on wildlife documentaries in the flesh, for the first time.

And then it was off along the canopy walkway, passing scorpions and giant ants on the way. Tomorrow, I will be reporting on our trip to the Sukau Rainforest Lodge, perched on the banks of the Kinabantangan River, where we encountered a most unexpected creature enjoying himself in the water.

1 thought on “Borneo – The Canopy Walk”