Dear Readers, Sunday is the hardest day of the week for me. For years, it was the day when I would give Mum and Dad a call to see how they were doing and to get all the gossip. After Mum had died, it was the day when I would ring the nursing home, to see how Dad was getting on and to have a little chat if he was up for it. He often was: one of the staff nurses told me that Dad was her Personal Assistant, and would often answer the phone if they couldn’t get to it quickly enough.

‘She’s not here!’ he’d say, and put the phone down. Just as well they had a way of retrieving phone numbers so that they could return the call.

But now, of course, Sundays are all my own. No one to check up on, no one to call. Admittedly I don’t have the worry, but I think the emptiness is much worse. And so, I turn to nature as usual, to see what’s going on outside.

The hemp agrimony around the pond is just coming into bloom. The bumblebees could care less, but the honeybees love it, and so do the hoverflies. 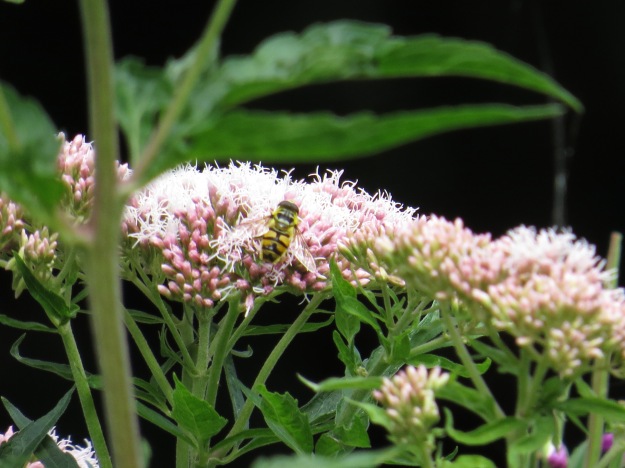 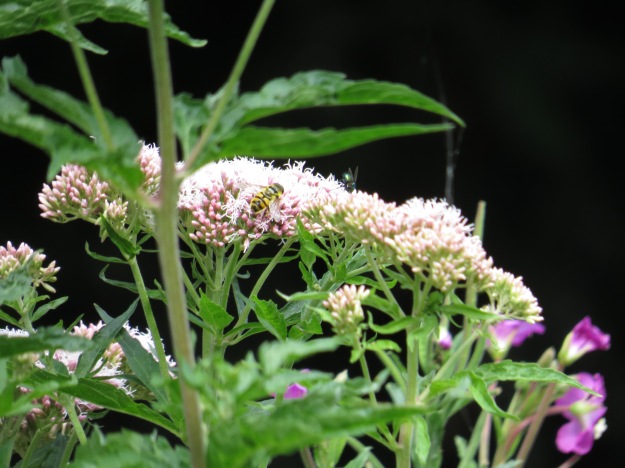 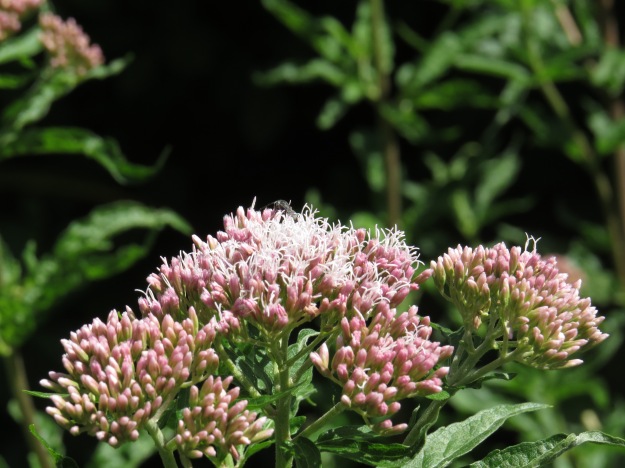 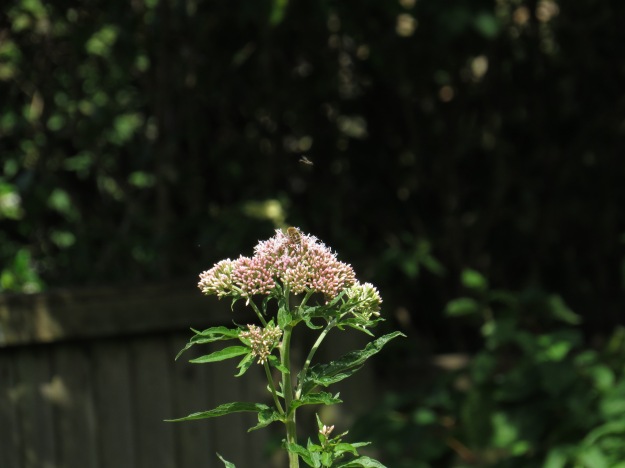 Honeybee on hemp agrimony, with hoverfly waiting to land above it.

The hemp agrimony is a deeply scruffy plant. While in tight, pink bud it looks almost respectable, but once the flowers open it looks distinctly blousey and uncoordinated. Still, for a few weeks every year it attracts every hopeful little pollinator, and that’s good enough for me.

Rather neater looking is the meadowsweet, with its creamy-white, sweet-smelling flowers. The hoverflies love this, too.

But my mood still hasn’t shifted enough, and off we go to the cemetery for a walk. St Pancras and Islington Cemetery is only open to the public from 10 a.m. to 3 p.m. at the weekend, though mourners and those tending a grave can also visit during the week. It isn’t until I see these lovely fox-and-cubs orange daisies alongside the yellow nipplewort that I start to cheer up.

Then, a comma butterfly positively poses, and kindly waits for me to take a photo. 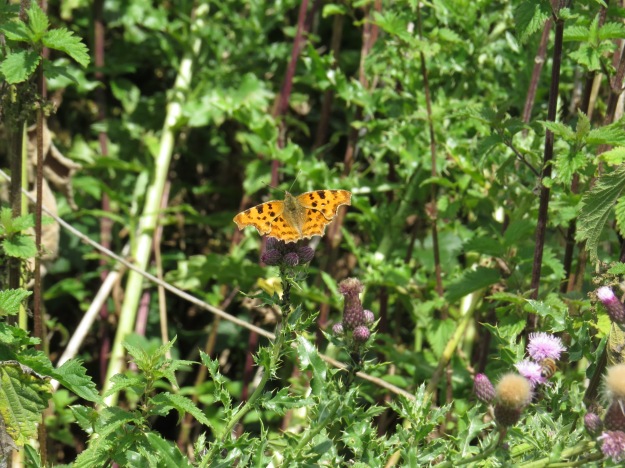 I munch on the first ripe blackberry that I’ve seen this year – it’s sour as anything, and obviously needs a bit more time baking in the sun, but it does the job.

The spear thistle flowers are starting to erupt into fluffy seedheads. 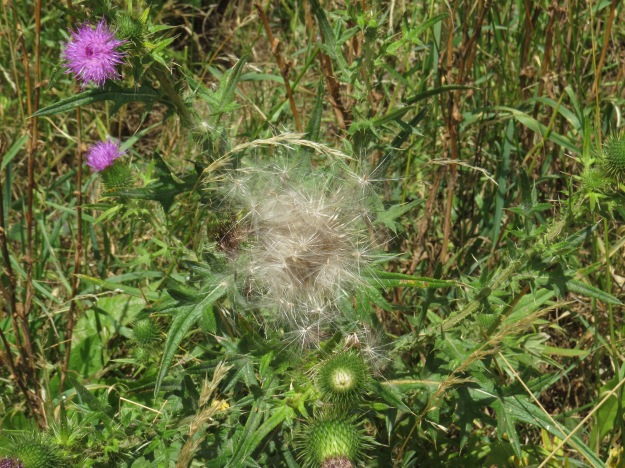 Down by the stream, there are some beautiful but unwanted guests – a clump of Himalayan Balsam, a most invasive plant which can clog entire waterways. I think I shall have to mention it to the cemetery authorities, but then they haven’t been too bothered about the Japanese Knotweed which they also have. It is so pretty, and so beloved by pollinators, that it seems something of a shame.

There is a lot of goat’s rue around this year, in both white and lilac. It’s funny how ‘weeds’ go from being unusual to everywhere in the space of a few years. I was delighted when I first saw this plant on Muswell Hill Playing Fields in 2015, and now I’m tripping over the stuff. 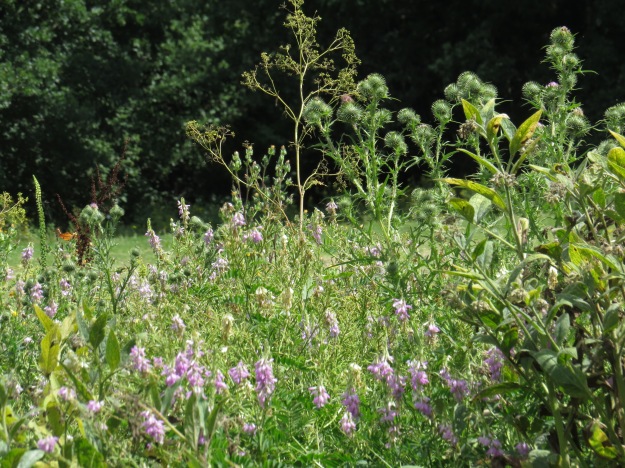 There are fine stands of teasel and rosebay willowherb too.

We wander up the hill so that I can have a look at the Egyptian cat, one of the most distinctive grave markers in the cemetery. 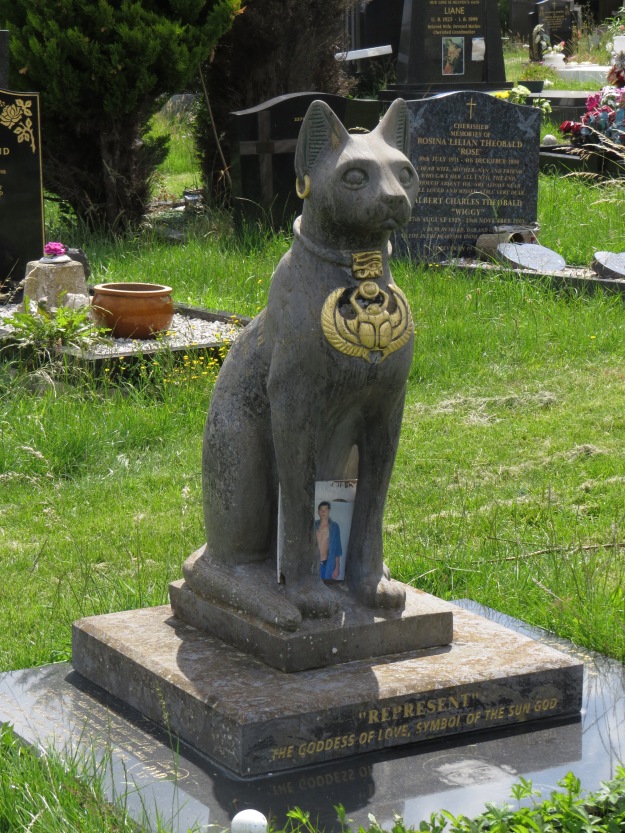 And then we pass the statue of this fine Scotsman, with a bunch of fresh flowers in his hand.

And a speckled wood butterfly is waiting as we head back out into the sunshine.

But as I get home, the things that I’m trying to run away from are still there. I go upstairs to start writing this blog, and as I gaze out of the window trying to think how to begin, my eye is caught by the sheer volume of activity outside on the buddleia.

Some of those little specks of life are bees, but a lot of them are flying ants, taking advantage of this still, warm day to leave their nests and found new colonies. The females with their swollen abdomens and the smaller males have wings, and fly off together. 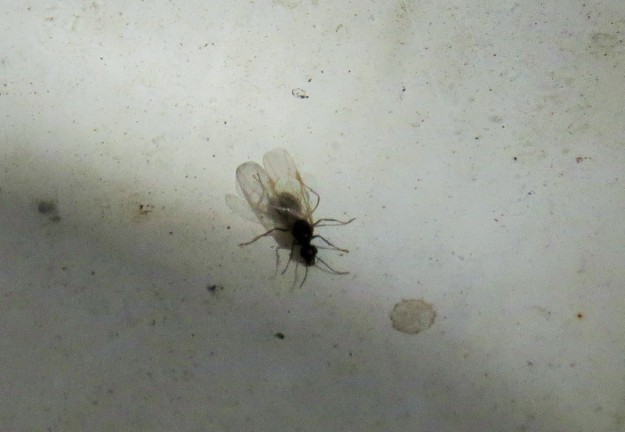 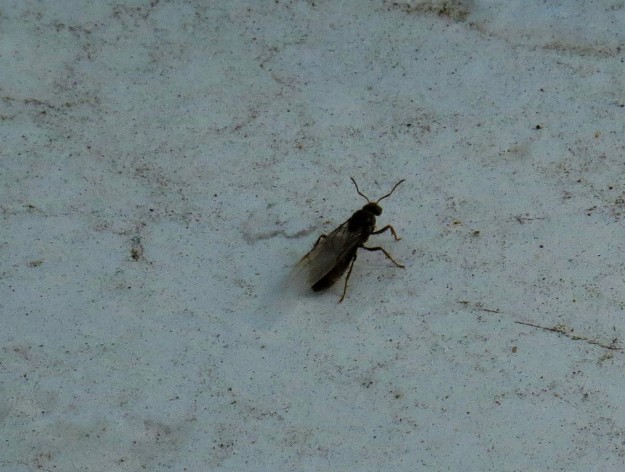 Once the queen has been mated, she bites off her own wings and tries to find a space underground to start laying her eggs. If she is successful, she will never see the light again, but will have thousands of children. However, many birds, including sparrows, love eating the ants, and only a tiny proportion of those who emerge will found new colonies. 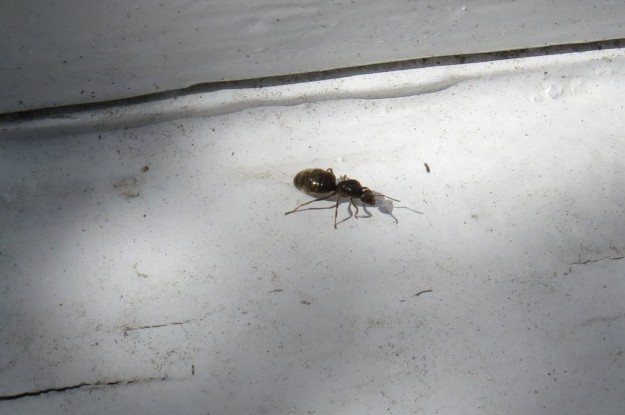 And the sight of all these insects reminds me, again, of my childhood. When we lived in our house in Stratford, East London, the flying ants would take on the quality of a Biblical plague, invading the houses in their hundreds. I remember becoming almost hysterical on one occasion, but Mum smartly calmed me down.

‘They’re only ants’, she said. ‘They’ll be gone tomorrow’.

And so they were, and all that was left were their wings, like tiny shards of broken glass.

7 thoughts on “Shaking Off the Sunday Blues”