Dear Readers, as a child I had a horror of the beetroot cubes that were served as part of our school dinners. There was something about the texture of the vegetable, the sharpness of the vinegar, the lurid-pink ‘juice’ that contaminated everything else that made me feel slightly nauseous. We were meant to eat everything on the plate (which contributed to my brother’s life-long hatred of steak and kidney pudding)  but one day I just couldn’t, so I told the dinnerladies that, with some regret, I would have to decline the beetroot because I was allergic to it.

I remember seeing them look at one another with some puzzlement, because allergies were not much discussed in 1968. Furthermore, ‘allergy’ was not a word that an eight year-old was supposed to know.

I got off on that occasion, and I seem to remember that the point wasn’t pushed subsequently. The sensible thing to do would have been to ask Mum if I was actually allergic, but I don’t think the school ever did.

These days I am much more inclined towards beetroot, not least because it comes in so many forms, and because, roasted or raw, it is actually quite delicious.

Chioggia beetroot. Look at the candy stripes! (Photo one)

All beetroots descend originally from sea beet (Beta vulgaris ssp maritima) which is found all over the coastal areas of the UK and Ireland (though it is notably absent from the more northern parts of Ireland). All of the cultivated beet varieties descend from this one humble salt-marsh plant: not just our salad beetroot, but sugar beet (which produces the vast majority of the sugar that we eat) and also, to my surprise, chard (where we ignore the root and eat the leaves and stem instead). As you might expect from a plant that grows in a marine environment, most varieties of beet are tolerant of salty soils. They prefer cooler temperatures, though chard is said to be happier at a higher temperature than the root vegetable varieties.

Beetroot is really one of ‘the’ cold climate crops – it has helped us to get through many winters, and it’s no surprise that eastern Europe has produced some of the most interesting recipes. Bortscht is a case in point – this beetroot soup has many variations (not all of which contain beetroot incidentally). Apparently, it would originally have been made with hogweed (Heracleum sphondylium), and it’s the Russian word for this plant (borsch) which gives it its name (although the more usual English spelling, borscht, comes straight from Yiddish). It can be served hot or cold, with potatoes or smetana (a type of sour cream), with meat or fish or as a purely vegetarian soup. It forms part of the ritual traditions of the Roman Catholic, Greek Orthodox, Greek Catholic and Jewish faiths, and the original ‘borscht’ recipe is claimed by several cultures. 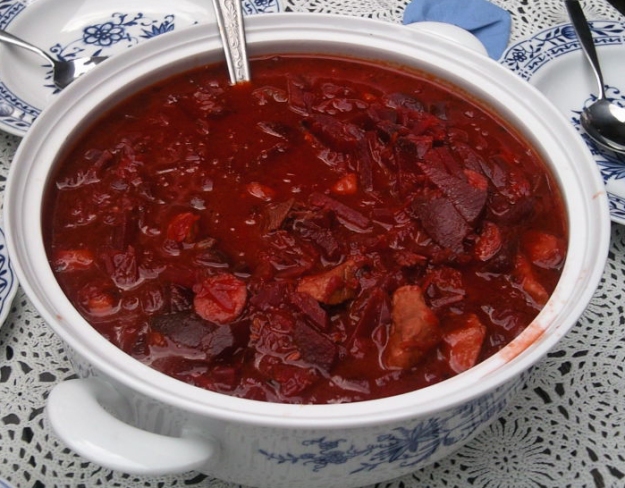 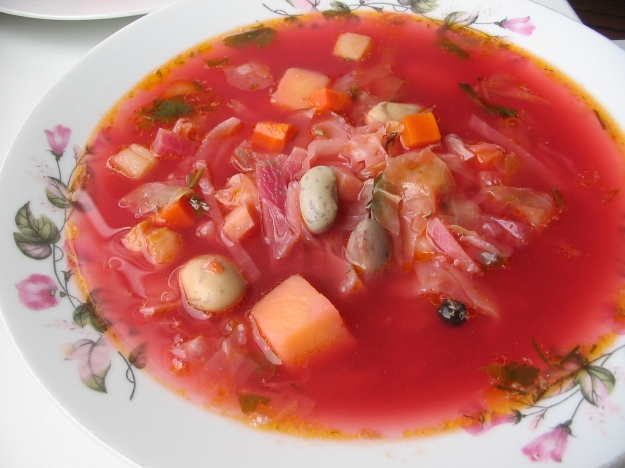 However, these soups all still seem to have rather too much obvious beetroot in them for my taste, and so my preferred method of getting some of the red stuff into my diet is by making a beetroot and chocolate cake, for which there are multiple recipes on the web (though I have a great fondness for the Nigel Slater recipe here). I have found that many vegetables disappear into cake, providing moistness and a streak of colour but nothing more assertive – carrots are an obvious choice, but courgette and squash have also worked very nicely for me. Do not, under any circumstances, try it with swede though. The results are like something that Satan might serve up at afternoon tea. 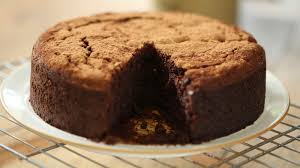 Beetroot also has a long history of medicinal use (though its habit of turning urine red can cause considerable alarm to the unprepared – there is actually a word for this, beeturia). It has been used as a treatment for constipation since Roman times, and Apicius gave no less than five recipes for beetroot soups to be used as a laxative. Tests on beetroot have shown that it can have an positive effect on the reduction of  hypertension.

In the UK, according to the site Plant Lore, beetroot wine was used as a cure for asthma, chilblains, earache and, apparently, snake bites.

The intense red colour of beetroot was used historically to colour wine, and it is still used as a food-colouring for things like tomato paste and breakfast cereal.

Flowers on ‘my’ beet plant

Beetroot is one of those vegetables (like brussel sprouts) that polarises people – you are either a fan or a hater, it seems. But would our attitudes change if we remembered that beetroot has a reputation as an aphrodisiac? The ancient Greeks believed that Aphrodite, goddess of love, ate beetroots to make herself more beautiful. The Romans believed that eating beets and drinking beetroot juice could enhance sexual performance,  and there were frescoes of beets in the Lupernar brothel in Pompeii (though all the images of the frescoes that I can find are much too X-rated for these august pages). English folklore has it that if a man and a woman eat from the same beetroot, they will fall in love. Beetroot juice has also been used as a hair dye and as a cosmetic to brighten up pale cheeks and provide a substitute for lipstick.

The actual harvesting of beetroot has long been a heavy, back-breaking job, however, and I like this painting by Leon Wyczółkowski , one of the leading Realist painters of the interwar period in Poland. You can almost smell the soil and the wood smoke, and feel the cold in your chapped hands.

And finally, a poem. I love this vignette by Pauline Prior-Pitt, who moved from Hull to North Uist in 1997 and who started writing poems in her thirties. I feel that it sums up the way that we can’t judge people by appearances, and how exchanges are often more complex than they appear.

Meeting at the Mobile Library Van by Pauline Pitt-Prior

In your muddy coat, you stroll up from your croft;
choose two biographies.

And I’m not sure you’ll want
to look at poetry; am surprised

when the pirate behind your fiery eyes
lets me help you choose a Douglas Dunn
to add to your collection.

Quick as a dog you’re down at the loch side,
showing me your veg patch,
hidden from storms inside peat stacked walls.

“Bloody deer have eaten all my greens.”

You ask if I like beetroot, tug up
two huge globes covered in mud.
Each one must weigh at least a pound.

And I’ve been waiting for this windy day
to open windows wide,

chopping the beets with onions and Bramleys
adding sugar, spice, and vinegar
and slowly simmering them together.

And I’m thinking, six jars of chutney
are more than a fair exchange

for the poetry I chose for you to relish.

Photo Four by By Brücke-Osteuropa – Own work, Public Domain, https://commons.wikimedia.org/w/index.php?curid=7284301