Dear Readers, I am a recent convert to litter-picking in our local area of ancient woodland,  Coldfall Wood. You might not think that picking up the rubbish left by other people and popping it into a mauve dustbin bag would be anything other than an unpleasant, unsanitary way to spend an hour, but I am here to tell you that you would be mistaken. And here’s why.

Firstly, there is the thrill of the chase. Once you get your eye in for the gaudy colours of a family-sized crisp packet, or the shine of the cellophane on a cigarette box, you start to be mildly disappointed when a stretch of woodland is pristine. By the end of yesterday’s litter-pick we were competing to see who could get their litter-pickers around the tiniest scraps of garbage.

The way the rubbish stands out also makes me think about how hyper-stimulated we are by the advertising and packaging around us. These colours look so unnatural against the cool greens and browns of the wood. There might be the odd splash of red as the berries on the cuckoo-pint appear, but compare that to the lavender and gold and the shiny silver interior of a bag of crisps and you can see how frantically companies want us to buy.

Plus, let us not underestimate the satisfaction of using a litter-picker. It’s like being in partnership with a very compliant stork as you close the ‘beak’ of the instrument around a bottle of discarded hand-sanitiser and pop it into a bag. There is something about the precision of the movement that is very pleasing, at least to me.

Secondly, if you are litter-picking, you are walking in the woods with a purpose. You are looking for what’s different, and somehow your senses are reset because you have to pay attention, to look for the tiniest scraps of difference. I can stomp through the woods and barely notice them if I have a big work problem to deal with, but now I am forced to slow down. It’s a kind of meditation, looking at the ground, looking under trees, watching for the things that are out of place. And then you look up, and the light is pouring through the hornbeams, and you let out a deep, heartfelt sigh. What a beautiful place this is.

Thirdly, by litter-picking you may be preventing further littering. There is something called ‘broken window theory’ – if a neighbourhood looks neglected, people won’t worry so much about adding to the squalor. When we are litter-picking, every person who walks in the woods will see that other people are concerned enough about the area to give up their time to clear up the mess. Often, people stop and chat, and it’s a chance to talk to them about what they’ve seen and what’s going on. For some, especially the children, it might be enough to make them think twice about dropping that plastic bottle on the path when they’ve finished with it.

Fourthly, it makes me curious about the stories of the rubbish. Behind a dense tangle of holly and yew there were the remains of a gathering – the aforementioned crisp packets, a wine bottle, the lid from a plastic box. That all says young people to me, although it looks as if someone was organised enough to make their own sandwiches. They must, like all young people, have really wanted a spot out of sight, somewhere private to have their picnic, but it seems a remarkably un-Dionysian affair. I wish they’d taken their litter home, but all things considered I’ve seen worse. And thinking about these things, and actually doing something about it, somehow softens me towards these ghost picnickers. It’s easy to get angry about the littering (and I do) but who knows what all the reasons are? Sometimes people simply don’t think about the consequences of their actions. Sometimes, they are disturbed and have to leave in a hurry. I’m sure a novelist could create a whole plot line just around this spot.

And then, there is the fellowship. At a time when so many of us have been confined to our houses, just to walk around the woods with another human being, even at two metres distance, is a fine, morale-building thing to do. There were eight of us litter-picking last night, and it was good to meet old friends, and to chat to new ones. It is wonderful to share a purpose with other human beings and to be united in a task, however small. This is how community is built. 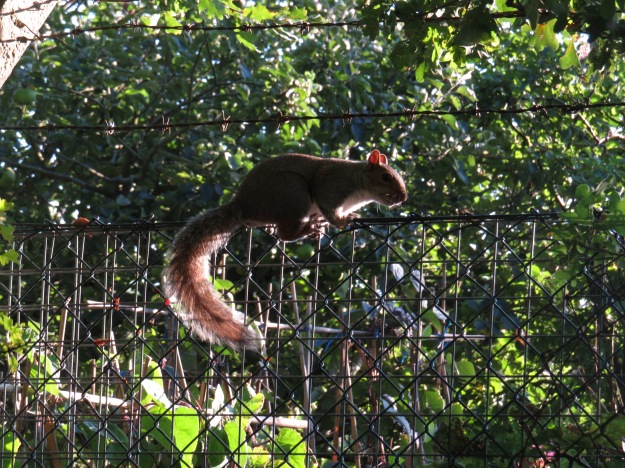 Being in the wood as the sun goes down is another unexpected pleasure – the way the sun lights up the squirrel on the fence beside the allotments, the way the colours change. And maybe the final reason that I love litter-picking is because it feels as if we make a difference. We have filled half a dozen bin-bags with rubbish, and what was mess has been made clean. There is the satisfaction of undoing some of the harm that has been done  to the wood during this period of intense use, and it is a small way of saying thank you for the calm and beauty that Coldfall brings to all of us. I have learned that it is easy to stew in a big pot of judgement, fulminating  about what people should and should not do, and of course there is much reason for anger. But we are not powerless, and activism can be as simple as saying ‘I love this place, and I am not going to just stand by and complain about other people’s bad habits. Instead, I’m going to do something about it’. I’m sure that, tomorrow, there will be more litter in the woods, but tonight, as we walk home, we know that it’s better than it was when we arrived. And that is a feeling worth having. 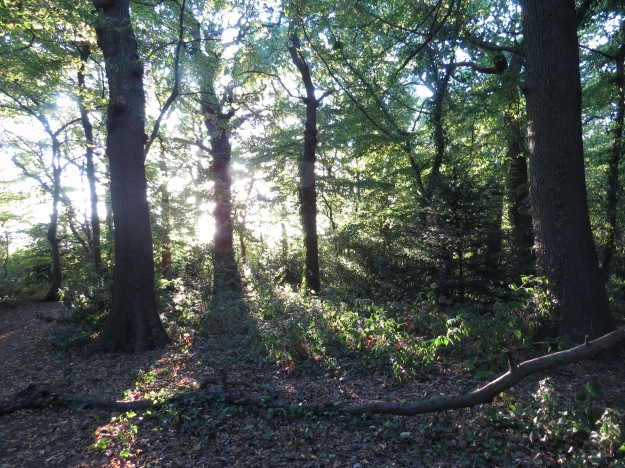 19 thoughts on “Why I Love Litter-Picking”