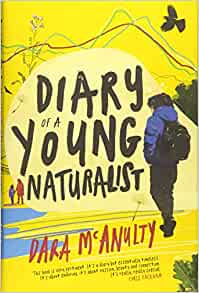 Dear Readers, I am a sucker for a book in the form of a diary – there’s something about those daily entries, the feeling of a story unfolding across time, that I find very appealing. Plus,  this is no ordinary diary. Dara McAnulty is a teenager, living in Northern Ireland, with a passionate involvement with, and interest in, the natural world. That’s not all, though. McAnulty has a younger brother and  sister, and

‘Not only is our family bound together by blood, we are all autistic, all except Dad – he’s the odd one out, and he’s also the one we rely on to deconstruct the mysteries of not just the natural world, but the human one too. Together, we make for an eccentric and chaotic bunch. We’re pretty formidable, apparently. We’re as close as otters, and huddled together, we make our way in the world‘.

McAnulty guides us through his world, and while there are ways in which he experiences the world in a different way from many of us, there are so many occasions when I could empathise with him: before a holiday to Rathlin Island, for example, there is that all too familiar mixture of anticipation and terror.

‘Perhaps it’s because I love new places and hate new places all at once. The smells, the sounds. Things that nobody else notices. The people, too. And the right and wrong of things. Small things, like how we’d line up for the ferry, or what was expected of me on Rathlin when we arrived’.

When the diary begins, McAnulty is living in suburbia, and is suffering at school:

‘The fourth ‘report card’ of the year has kept my feet from touching soil and grass, and locked me in a cycle of exams where freedom seems nonexistent. The classrooms at school are claustrophobic. Through the stale air I’m bombarded with fidgets, sighs, shifts, rustles as loud as rumbles. The rooms are bright, so bright that the reds and yellows pierce my retinas. Fluorescents drowning natural light. I can’t see outside. I feel boxed in, a wild thing caged‘.

Outside, though, it’s different.

‘The colours on Rathlin are mostly natural and muted in this early spring light, tones that are tolerable to me. ….Natural sounds are easier to process, and that’s all we hear on Rathlin. Here, my body and mind are in a kind of balance. I don’t feel this way very often’.

And McAnulty has been horribly bullied at school;

‘Unfortunately for me, I’m different. Different from everyone in my class. Different from most people in my school. But at breaktime today I watched the pied wagtails fly in and out of the nest. How could I feel lonely when there are such things?‘

But this is far from a misery memoir of any kind. Early in the book, McAnulty’s mother tells the family that they are moving house, to County Down. The author doesn’t know it, but this is going to be the start of an extraordinary rebirth for him. Nonetheless, there is the fear of change, and the loss of familiarity.

‘Every day, ever since I can remember, Mum has sat me down, sat us all down, and explained every situation that we’ve ever had to deal with. Whether it was going to the park, to the cinema, to someone’s house, to a cafe. Every time, all manner of things were delicately instructed. Social cues, meanings of gestures, some handy answers if we didn’t know what to say. Pictures, social stories, diagrams, cartoons. Many people accuse me of ‘not looking autistic’. I have no idea what that means. I know lots of ‘autistics’ and we all look different’.

How I hoped that the move would be a good thing! I have rarely kept my fingers so tightly crossed for an author. And the first signs are good. McAnulty makes a friend with the boy next door, Jude:

‘We chat aimlessly about mythology and animals and – just stuff. I’ve never been good at conversation. It’s an art I don’t know the rules of. Either I just ramble on, spouting facts, not listening to the other person, or else I silently gawp, muddled by how to take part. It’s how it’s always been. With Jude, though, it feels easy. There’s no third person, no chiding, no group, no bullies. I’m cautious though. It’s like I’m waiting for the contempt to slip out, even accidentally’.

And when he starts at his new school, the author quickly finds his feet:

‘I have never talked so much at school, ever…Discussing science, Star Wars, nature, maths, philosophy, history. Everything. I even started to wonder if this was what being normal actually felt like, but had to stop myself because normal is definitely not something I want to be. it felt strange, alien. But such a relief‘.

‘I have gone two weeks without being bullied. Two weeks. This is the longest period I’ve experienced without taunts and jibes or fists landing’ .

And as a brief interjection here, how horrific it is that this kind of aggression is tolerated in a school. McAnulty’s new school shows that it doesn’t have to be that way, that a bullying culture can be changed if everyone is determined to make it so. How I feel for all the children afraid to go to school, unable to learn, because they are afraid of physical and mental abuse.

The author’s connection to nature is profound. He is angered when a little boy finds a conker and the child’s mother throws it away because it’s ‘dirty’.

‘As I watch, anger surges inside. I think about all these tiny wrongdoings, everywhere in every season, the tiniest crimes. The things grown-ups do without thinking. The messages they send angrily into the world. The consequences ricochet through time, morph, grow, shapeshift. What’s so wrong with a conker?’

Good question. Slowly, almost without noticing, McAnulty is drawn into the world of activism: he starts an eco group at school, something that would have been unthinkable at his old school. He goes on strike and stands alone in the freezing cold with two placards, one saying ‘School Strike for Nature’ and the other ‘School Strike for Climate’. He is frustrated, though, by the questions that he’s asked, and by the way that he’s now a ‘leader’.

‘Instead of asking about the issues, they wanted to talk about ‘me’, how I ‘felt’. Not the science or the facts’.

At the start of the book, McAnulty talks about the blackbird that he hears singing. Later, he talks about his favourite saint, St Kevin, who, legend has it, stood so still that a blackbird made her nest in his hand, and so he stood until the eggs had hatched and the fledglings flew away. The author, who has tried throughout this diary to work out how to both protect himself and to be part of the world, ends with this.

‘A blackbird might never choose to nest and lay its eggs in my palm, but I know that my hand will always be outstretched, to nature and to people. Because we’re not separate from nature. We are nature. And without a community, when you’re always on your own, it’s more difficult to share ideas and to grow’.

This is a remarkable book by a remarkable young man. It gave me insight into what it’s like to live with autism, the joys and tribulations of family life, and how activism takes root and grows. More than anything, it gives a marvellous window into the nature of Northern Ireland, and of the joys of paying attention. Highly recommended.