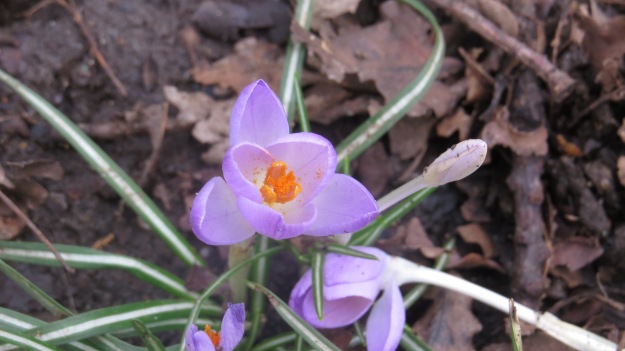 Dear Readers, close to the entrance of Coldfall Wood there is a tiny patch of Early Crocus (Crocus tommasinianus). How fragile this plant is, and yet how strong! It has burst through the hard-packed clay soil, sometimes lifting whole twigs and stones in its urge to reach the sunlight. 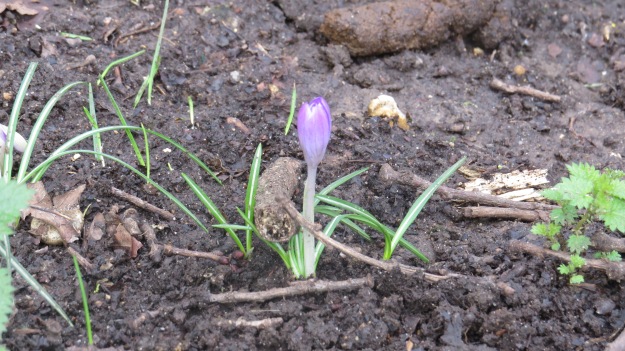 There are two very similar species of crocus that you are likely to see naturalised in the UK. The Dutch or Spring Crocus (Crocus vernus) looks similar to the Early Crocus, but it has a mauve or purple ‘throat’ which is never lighter in colour than the flowers themselves. 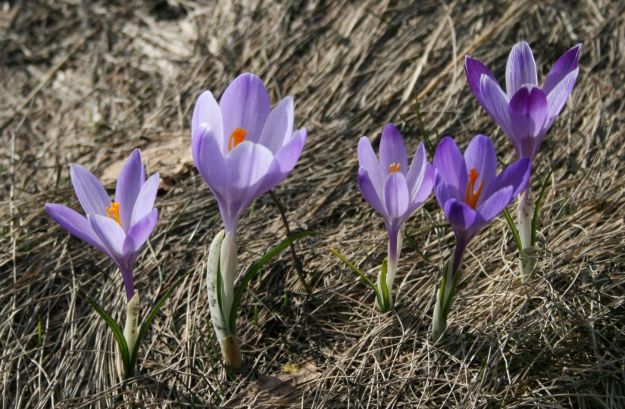 Spring/Dutch Crocus (Crocus vernus) – notice the mauve ‘throat’ to the flowers. (Photo One – see credits below)

‘Tommies’ are native to Bulgaria, Albania, Hungary and the former Yugoslavia, and were named for the botanist Muzio G. Spirito de Tommasini (1794-1879), who was Mayor of the city of Trieste. They are relatively late arrivals, first cultivated in 1847, and not recorded in the wild until 1963, although this may have been due to confusion  with the Spring Crocus. The plant naturalises easily in lawns and churchyards, and there is a fine patch in St Pancras and Islington Cemetery, which has no doubt grown from a handful of bulbs planted on a grave. 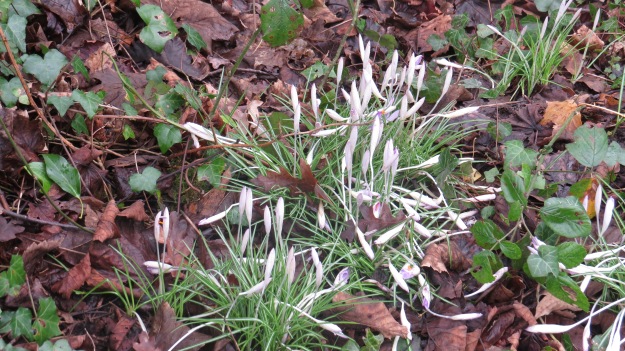 You might not think it to look at them, but crocuses (or, indeed croci) are part of the Iris family. The name is thought to derive from the Sanskrit word for ‘saffron’ (kunkuman) although it is the autumn crocus (Crocus sativus) that produces this spice, not these spring-flowering species. They do have the most intense yellow pollen, however, and you can see how the name has arisen. 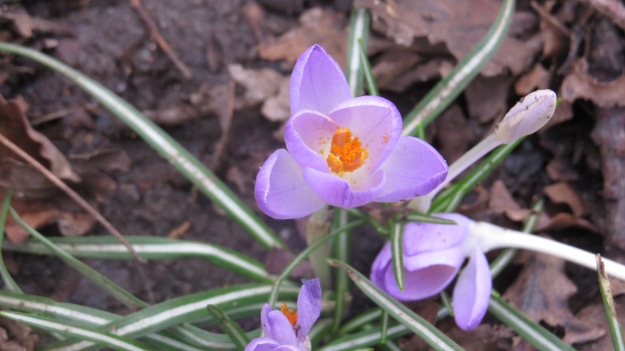 In Greek mythology, Crocus was a human youth in love with a nymph called Smilax. Apparently irritated by his audacity, the gods turned Crocus into, well, a crocus. Smilax was turned into either a yew tree or bindweed, depending on your source. The Greek gods were certainly a touchy bunch. 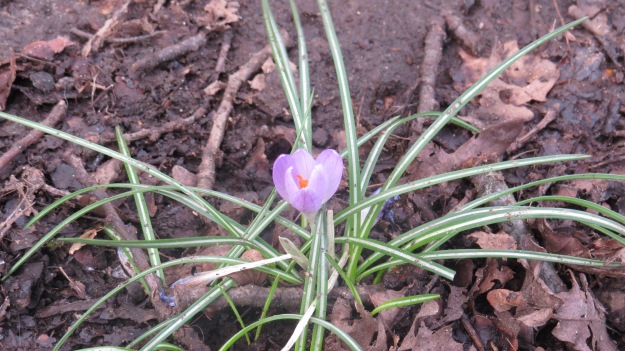 In the financial world, a ‘crocus’ is a company or sector which recovers quickly after an economic downturn. The waxy cuticle helps it to survive even when there is late frost or snow on the ground, so you can see how the comparison has developed. 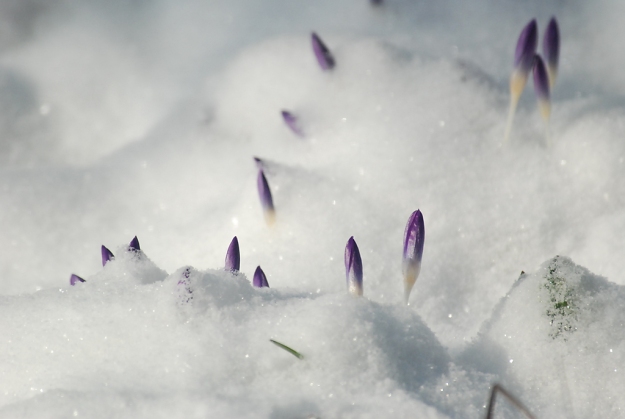 As I researched this piece, it became apparent that the poor old crocus had been the focus of some truly execrable poetry. Certainly, its bravery in sticking its petally head above the soil into the teeth of a snowstorm has been extensively celebrated, to the extent that Sherman Alexie, the editor of New American Poetry 2015, has this to say:

‘None of us ever needs to write another poem about crocuses, or croci, or however you prefer to pluralize it. Trust me, we poets have exhausted the poetic potential of the crocus. If any of you can surprise me with a new kind of crocus poem then I will mail you one hundred dollars.’

But, wait! I wonder if Mr Alexie has ever read Edna St. Vincent Millay’s poem ‘Spring’. I have to confess to loving this. It made me laugh out loud at the unexpectedness of the last few lines, for all their curmudgeonliness.  And if Ms Millay were still alive, I think she would deserve her prize.

To what purpose, April, do you return again?
Beauty is not enough.
You can no longer quiet me with the redness
Of little leaves opening stickily.
I know what I know.
The sun is hot on my neck as I observe
The spikes of the crocus.
The smell of the earth is good.
It is apparent that there is no death.
But what does that signify?
Not only under ground are the brains of men
Eaten by maggots.
Life in itself
Is nothing,
An empty cup, a flight of uncarpeted stairs.
It is not enough that yearly, down this hill,
April
Comes like an idiot, babbling and strewing flowers. 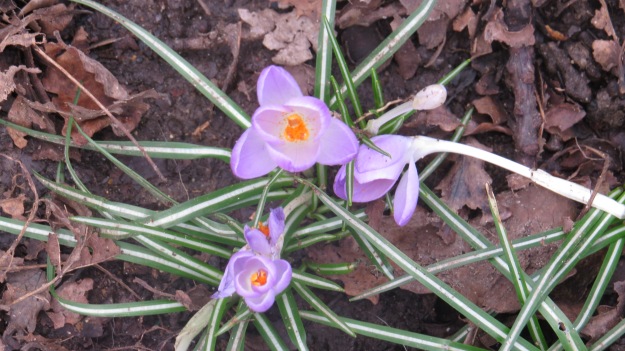 Ruth Fainlight’s powerful, disturbing piece on crocuses would surely also be a contender for a new way to look at the plant. I hadn’t come across the poet before, but I shall certainly be reading more of her work.

shivering petals the almost luminous mauve
of lurid bruises on the frightened faces
and naked bodies of men, women, children

herded into a forest clearing or
towards a siding where a train has halted
and the trucks are waiting.

But perhaps there is much to be said for ending with a poem that was chalked on a blackboard at Des Moines High School for all the children to learn. The sight of crocuses, for me, means that the world is still turning, in spite of all the things we are doing to it. The clock of the seasons ticks on, however erratically.

Daffodils and tulips
impatient underground
in March sent up a crocus
to have a look around.

She yelled, “It still is winter,
there is frost on everything.”
But a passerby who saw her said,
“A crocus!  It is spring!”

Photo One – By Franz Xaver (Own work) [CC BY-SA 3.0 (http://creativecommons.org/licenses/by-sa/3.0) or GFDL (http://www.gnu.org/copyleft/fdl.html)%5D, via Wikimedia Commons