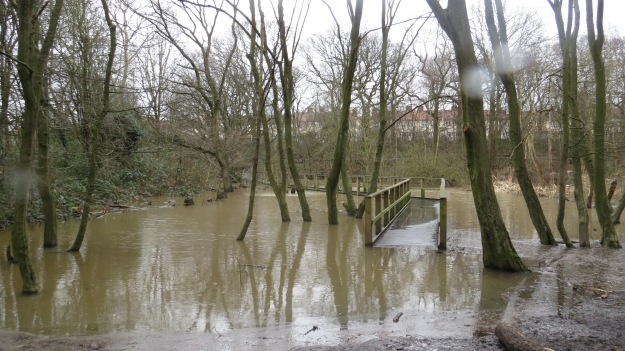 Hmm. Maybe I’ll leave the boardwalk for another day….

Dear Readers, we have had a lot of rain here in London over the past few weeks. In fact, we’ve had a lot of rain this winter full stop. So it shouldn’t have been a surprise that when I took a walk in Coldfall Wood last week, I found that ‘The Everglades’ had the highest water level that I’d ever seen. Normally, it looks like the photo below.

The pond is fed by several streams and, as the soil is a claggy, slippery clay, the water is slow to drain away. And the transformation of what is usually a bog into a decent sized lake attracted a creature that I have not seen previously in my half-mile ‘territory’.

A mallard drake and duck (you can just see her in the background) had popped by to check out the new facilities. Now, there is no shortage of mallards in the UK – there are an estimated 710,000 over-wintering here from Scandinavia and other parts of northern Europe – but nonetheless it is the first time that I’ve seen them here. Did they notice the water as they were flying past, and decide to check it out? They were certainly more skittish and nervous than the average boat-pond mallard, who would drown his granny for a mouldy crust (or so it sometimes seems). 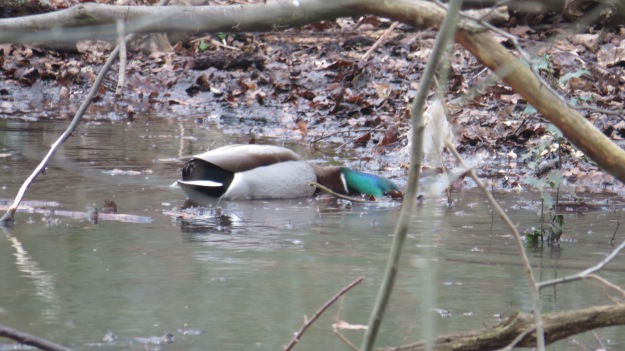 For many of us, our earliest close contact with birds was when, as toddlers, we were taken off to  ‘feed the ducks’. I remember being knocked over and trampled by the rubbery feet of a Canada goose , and the sharp scrape as a mute swan’s beak nearly took my fingers off, but I still loved distributing my largesse to these (in my mind) starving creatures. It was probably my first experience of being compassionate to non-human animals, and I remember being intent on making sure that every bird got his/her share of the shopping bag full of crusts.

Today, we know that bread is actually bad for wildfowl who are usually herbivorous by nature, and the Canal and River Trust is advising that we feed the birds defrosted frozen peas and sweetcorn instead, but when I was growing up the ducks on Wanstead Flats got white sliced bread and an occasional stale Madeira cake.  Apparently we feed six million loaves a year to ducks and geese, so I am not surprised that bird charities also advise that we ‘exercise portion control’, though as many of us have problems with the size of our own meals I suspect that we will continue to err on the side of generosity.

I love the green iridescent head of the male mallard, and the shiny violet-blue patch on the wing of the female (known as a speculum). Mallards are birds that would be more appreciated if they were rarer. I like to stand back sometimes and  to imagine myself into a state of prelapsarian innocence in which I’d never seen a mallard before. What a wonder it would be!

Mallard drake in flight (Photo One – credit below)

In Birds Britannia, Mark Cocker relates how many of our common phrases are related to the duck (in Victorian times, the mallard was known as ‘the wild duck’). There’s ‘water off a duck’s back’, and ‘nice weather for ducks’. There’s the duck in cricket (probably because a nought resembles a duck’s egg), and ‘a dead duck’. A friend of mine at school used to refer to anyone who was behaving pathetically as looking like ‘a dying duck in a storm’. Yep, ducks have been quaking through our subconscious subliminally for years. No wonder we take them for granted.

The question was, though, would this pair stay? My mind drifted off to thoughts of fluffy ducklings puddling through the bye-ways of the pond. But when I visited again a few days later, there was no sign of the mallards. Maybe there were just too many people and dogs about, but I wonder if the ducks spotted the many, many crows who hang out in the woods, and realised that their eggs and hatchlings would be at too high a risk of predation. I was somewhat downhearted, but there was compensation, as there always is.

As I slipped along the muddy footpath by the side of the stream, I saw an olive-green bird with a red cap undulate through the air and land by the fingerpost bridge. I was too far away to get a good photo, but it could only be one bird – a green woodpecker. I’d heard them yaffling away for a few weeks, but this was the first time I’d gotten a semi-decent view.

I am always surprised by these birds. They look too exotic for a wood in East Finchley. But here this one was, looking around and taking a drink. I do wonder how two species of woodpecker (we have great spotted woodpecker too), stock doves and parakeets all manage to find enough dead trees to nest in, for only a hollow tree will do for all these species. The management of the wood, with dead trees being allowed to stand unless dangerous, helps to provide the habitat for these birds. As in any garden or park, the desire to be too tidy is anathema to wildlife.

And so, Coldfall Wood continues to throw up surprises. I never know what I’m going to see when I open those creaky gates and start to explore. I do know that to see things takes time, and patience, and that I need to engage all my senses, not just my eyes. For that, I need to go alone, or with a patient companion, who doesn’t mind standing in the cold peering into a bush while I fiddle with my camera settings. I do know that I always come home inspired, my understanding of my ‘territory’ expanded, and with a new astonishment at the variety of plants and animals that it’s possible to find close to home. For anyone who is downhearted or lost or generally fed up with the state of the world, I can recommend a little stroll around a park, or garden, or even a few minutes spent scanning the sky with binoculars. The sight of so many other creatures going about their business has a way of providing perspective, of taking us out of our own heads and letting us see that we are part of something much bigger. And that, in a world which encourages us to be so self-absorbed, can be as refreshing as a cold drink on a hot day.

Photo One – By Bauer, Erwin and Peggy [Public domain], via Wikimedia Commons

1 thought on “Just Passing Through”