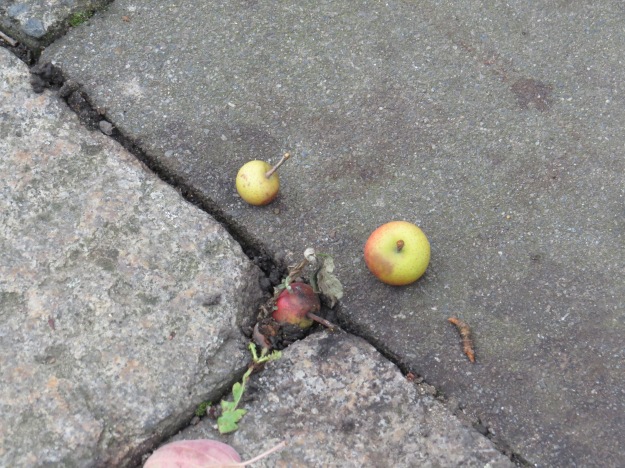 Dear Readers, the man a few doors along from me gets very frustrated with the crab apple street tree outside his house. In October and November you can see him sweeping up all the rotten fruit , and if you pause he will explain why he hates it. 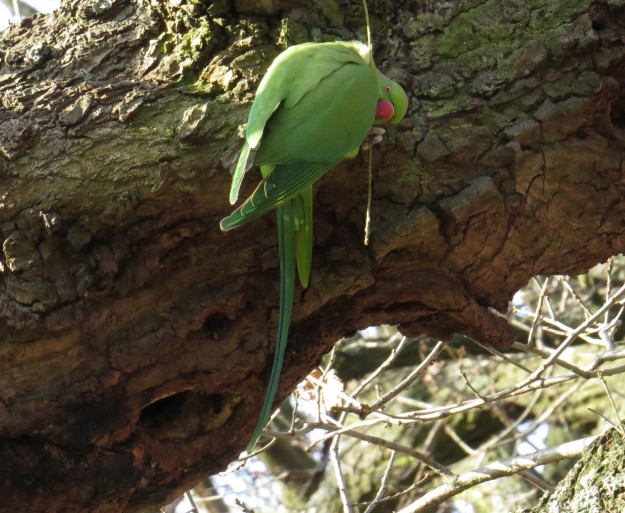 A noisy and badly-behaved parakeet

Fruit trees as street trees can be problematic, because the fruit is attractive to all kinds of creatures that some people wouldn’t want on their doorstep.  I have no problem with the poor wasps, who are imbibing the last sweet thing that they’ll ever taste, and who could blame them for wanting to get a bit tipsy after a hard year of caterpillar-catching and grub-grooming. And I don’t have a problem with the parakeets either, who bring a touch of exotic beauty to the street.

But then there’s the mess. It’s not a problem, generally, with cherry trees, because the fruit appears early and the thrushes and blackbirds eat every last morsel. But the autumn fruits can be something of a problem. After all, how much crab apple jelly can anybody eat? And even the more edible fruits can prove difficult to handle in their sheer abundance and generosity.  When I went on a street tree walk earlier this year, I visited a group of sand pear trees whose fruit was so succulent and heavy that it was bombarding the pavement and any cars that were parked underneath with a deluge of sticky-sweet puree. As you might remember from that piece, half the street wanted the trees cut down, and the other half wanted them preserved. Peace broke out when it was decided to do something radical and harvest the fruit to be turned into perry (the pear-based version of cider). It’s almost as if we have forgotten what fruit trees were originally planted for.

A sand pear tree off Holloway Road in North London

I was very heartened to read in Time Out this week that a group of people are harvesting the apples from street trees, and trees growing on public land, to make cider and to give the fruit to foodbanks and organisations that prepare meals for isolated people. Although crab apples are not immediately edible(at least for humans), tons of perfectly good fruit are wasted every year because nobody picks it. There must be a better, more connected way to bring the hungry together with their food, and to make good use of nature’s bounty, and there are a lot of interesting experiments going on to do just that.

And it occurs to me that where a tree is just plain messy at certain times of the year, it wouldn’t hurt me to dig out my broom and give the man who lives a few houses down a hand. It’s so easy to become territorial in a row of houses, and to think that your responsibility ends at the edge of your garden wall. That might be strictly true, but it’s not a community I’d want to live in. When we had snow a few years ago, my husband cleared a path not just in front of our house, but for a good distance in either direction. He grew up in Canada and knows how to clear snow, but also recognises that it’s easier for some of us to do heavy work than it is for others. And yes, I know the old story that you can be sued if you clear your snow and someone falls over anyway, but from my research that seems only to apply if you’ve done something really stupid (like try to wash it away so that it freezes into an ice-rink).

So, as autumn turns into winter, and the sun seems to be low on the horizon all day, I’m determined to be more aware of the bounty around me. There are some handy maps that you can use, in London at least, to look out where your local fruit trees might be, and to keep an eye open for any seasonal bonanzas – here, for example, is one for Hackney, provided by the organisation Hackney Harvest. For a general map of street trees in London, have a look here: you can enter your postcode, and it will tell you what’s growing in your area. All the usual provisos about health and safety apply, but I’d be willing to bet that if you passed by some of these trees in the autumn, the fruit would be literally dropping off. Wash it well though, you know how keen some councils are on spraying things.

I’ve written before about how ‘plant-blind’ many of us have become. Whereas a generation or two back plants were in relationship with us, whether as medicines, or food, or as food for the imagination, nowadays it’s so easy to barely notice them. Writing the blog has opened my eyes a bit, but there is still so much more to notice and to learn about. I have grown to love the diverse plant community around my home, and to value it for the way that it roots me in place, and in history. If you are feeling a bit stale or lacklustre, put on your coat and hat and gloves and go for a fifteen minute walk. I guarantee that, if you walk slowly and pay attention, you’ll see something that piques your interest and takes you out of yourself. And maybe you’ll even find something to take home and turn into a crumble.

9 thoughts on “A Street Tree Harvest”