Dear Readers, here in East Finchley Rosemary is an extremely popular choice for the front garden. It is deliciously pungent if brushed against, and the tiny, complex flowers delight the bees. On a warm summer day the scent of the Mediterranean wafts up in a fragrant cloud. But on a cold December morning, it reminds me that the name ‘Rosemary’ comes from the Greek words for ‘dew of the sea’. It is also associated with Christianity: there is a legend that when the Virgin Mary threw her cloak over a white-flowered rosemary bush to dry, the flowers took on the blue colour from her garment. It was henceforth known as ‘the rose of Mary’.

In the Middle Ages it was said that a thriving bush of rosemary outside the front door indicated that the woman of the house wore the trousers, to which I reply ‘and your problem is?’. However, many men with such a botanical indication of their status right outside their living room window would sneak out at dead of night and cut the roots of the plant. A comb made from rosemary, however, was said to cure baldness, so maybe it was sometimes allowed to stay.

“As for rosemary, I let it run all over my garden walls, not only because my bees love it but because it is the herb sacred to remembrance and to friendship, whence a sprig of it hath a dumb language.”

Rosemary is a member of the Lamiaceae or mint family, and numbers basil, sage, oregano and mint among its siblings. They all  share the intensely aromatic oils that are such a boon in cookery, and which were probably developed to deter pesky insects – rosemary has been used as a way to protect clothes against moths, and was one of the ingredients of ‘four thieves vinegar’  which was said to prevent a person from catching the plague. As the plague was spread by fleas, there might have been a germ of truth in the idea, as with many folk remedies.

Rosemary is well adapted for a hot climate, with its needle-like, waxy leaves, which protect against water loss. It is known for its tendency to bloom out of season, and one of the bushes that I spotted last week was bursting with flowers.

Any Shakespeare readers will recall that Ophelia strews rosemary ‘for remembrance’ shortly before her watery demise. There is a long history of associating rosemary not only with remembrance, but also with memory: rosemary oil is said to be good for those struggling to memorise facts and figures, or whose memory is failing. The Guardian reported that sales of rosemary oil were rocketing amongst revising students. A packet of Maryland Cookies used to do the trick for me along with vats of black coffee, but hey.

Ophelia and Laertes by William Gorman (circa 1880). Note the sprig of Rosemary drooping from Ophelia’s hand (Public Domain)

Rosemary was also much associated with marriage during the Middle Ages, and both bride and bridegroom would have worn it on their wedding day. The bride would carry a sprig of rosemary from a bush grown in her parents’ garden, to remind her of the love and protection that had been afforded her there. A bridesmaid would plant a sprig of the same bush in the bride’s garden as a symbol of protection and in due course, a sprig from this would be passed on to the bride’s daughters. I love the idea of handing plants down from one generation to another. I have a sudden  vision of a garden filled with plants given to me by my friends and family, and the possibility of passing the plants on in my turn. That would be a real garden of remembrance every time I stepped out into it.

Rosemary is a most popular culinary herb, especially with roast meat, but it has also been cropping up in desserts recently. If you scroll down through this article, you’ll find apple cake with rosemary crumble, for example, which sounds extremely acceptable, especially as I haven’t had my lunch yet. There is also a rosemary and chocolate brownie and, hallelujah, a cocktail made from lemonade, bourbon and rosemary. Just as well that there’s so much of it here in East Finchley. 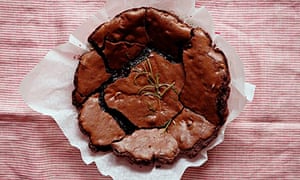 Rosemary and Chocolate Brownie (Photo One)

If you still have any rosemary left after all that cooking, you might consider knocking up some Hungary Water, which was a mixture of fresh rosemary tops and wine, and was used by Queen Elizabeth of Poland (1305-1380) to restore her youth and vitality when she was in her seventies (a ripe old age in those days). It is also said to cure gout and ‘paralysis of the limbs’. It had a brief spell of popularity as a perfume too, and no doubt all those courtly ladies (and possibly gentlemen) had great fun dousing themselves in the stuff.

Queen Elizabeth of Poland and her sons (1380). She looks very sprightly, I must say. (Public Domain)

And to finish, a poem. Elaine Feinstein (born 1930) is one of our greatest living Jewish poets, and this particular poem resonates deeply. It reminds me of the increasing frailty of my Dad, who was such a strong, vigorous man in his heyday. He still has his moments now, so it doesn’t do to underestimate him, but there is a poignant sadness in this work that moves me. I am breaking my usual habit of not pasting the poem because I want you to see it, but you can buy more of Feinstein’s work here.

We stopped the Citroen at the turn of the lane,

because you wanted a sprig of blue rosemary

to take home, and your coat opened awkwardly

as you bent over. Any stranger would have seen

your frail shoulders, the illness

in your skin – our holiday on the Luberon

but what hurt me, as you chose slowly,

was the delicacy of your gesture:

in your disguise as an old man.

Photo One (Brownie) by Yuki Sugiura for the Guardian