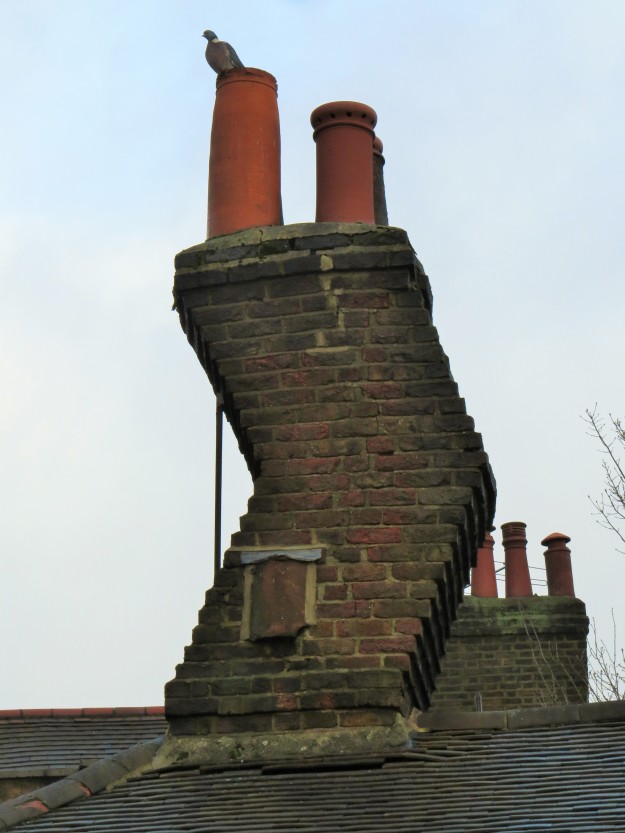 Dear Readers, this week I was in Hampstead, delivering an enormous bag of knitting wool to a charity called Knit For Peace who match keen knitters with good causes. I am a great believer in the healing power of crafts of all kinds – it’s hard to stay angry and resentful when you’re trying to work out how a Fair Isle pattern is supposed to work. And look at the excellent use that your master(mistress)pieces can be put to once the many hours of work have been completed! 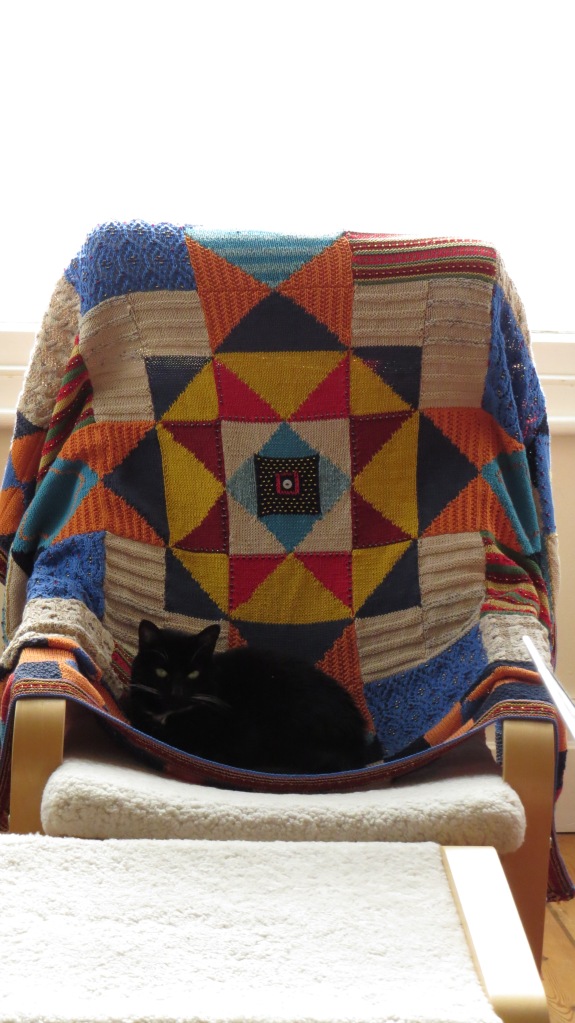 Willow the cat and my blanket.

Being in Hampstead gave me an opportunity to explore. I started off on Flask Walk, where I am always intrigued by the wonky chimneys in the first photo above. Why are they so eccentric? My delving into the internets has produced nothing on the subject, so feel free to chip in with any suggestions.

Hampstead seems such a quaint and attractive area, rather Bohemian you might think, a great place to bring up a family. However, as average house prices for the area are over £1.6m (and a ‘detached family dwelling’ is getting on for £6m) I don’t imagine the average family will be moving here any time soon. In the meantime, however, I spent some time admiring the water droplets on the leaves and plants, and trying not to look too suspicious, what with my camera and all. There are a lot of security teams around here, as you might expect. 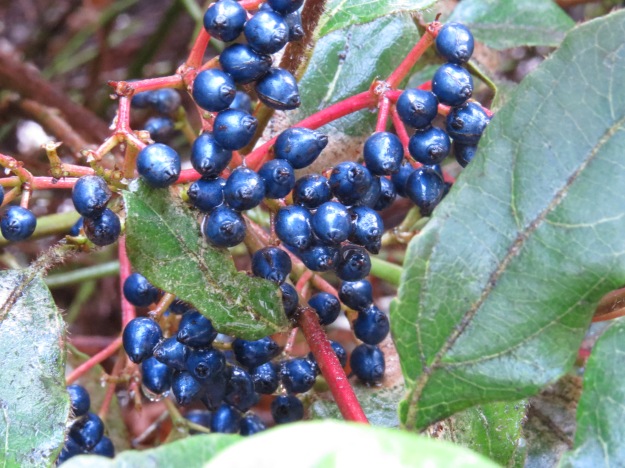 One reason for advancing along the road is that this is the location of Burgh House, the site of Mr and Mrs Bugwoman’s marriage in September 2010. Sadly, the building, and hence the delightful cafe, was closed until 10th January, but I recommend a visit for both food and edification, as the Hampstead Museum is also here. I took a few photos and remembered some of the details of the day – for example, when my dad and I got into the vintage Rolls Royce we’d hired to get to Burgh House and he said ‘I suppose I should be giving you some advice, but you know it all already’. Well, I was forty.

This was all very splendid but I hadn’t seen any animals yet, apart from one of the many blackbirds who have popped out in the past few days to make the most of the muddy conditions and the superabundance of worms. Incidentally, I was walking in the cemetery today with my most excellent friend A, and we observed a similar blackbird.

‘I don’t like to dwell upon blackbirds eating worms in a graveyard’, she said.

But when you think about it, how wonderful it would be to be recycled as a blackbird!

I decided to pop over to the other side of the village and have a look at the churchyard. The church itself is the Parish Church of St John at Hampstead, although I note from the website that it wasn’t initially clear which St John was intended – it was only in 1917 that it was declared that it was the St John the Evangelist. The current church was consecrated in 1747, although there have been religious buildings on the site right back to 986.

The Church of St John in Hampstead

As you might have expected by now, I was drawn to the churchyards. There is one around the church itself, and a second one across the road.

The churchyard around St Johns

I was not exactly dressed for muddy paths and bird watching, what with my bright red coat and boots and all, but I slithered around nonetheless. There is an atmosphere of melancholy under those dark, ancient trees, and sitting on a bench right in the middle of the churchyard was a young man, deep in thought. How these places support us when we need peace and solitude! I sneaked past as quietly and unobtrusively as I could and noticed how the robins have suddenly started singing, just in this past few days. How sensitive their clock is to the length of days.

Around the side of the church, a tombstone had split and weeds were growing in the cracks, a metaphor for life’s persistence and resilience if ever one was handed to me.

And then I headed off across the road, to the ‘overflow’ graveyard that was opened in 1812.

The place was full of birds. Robins sang from the gravestones and, as I nearly went flat on my bum under an alder tree, a gang of long-tailed tits came along to have a good laugh.

A long-tailed tit, no doubt laughing his head off

There was a small flock of redwings in the yew tree, and when one flew out to perch nearby, I was able to capture this candidate for Wildlife Photographer of the Year (not)

I found this exquisitely beautiful tomb, with an angel kissing the forehead of a small child. It is the last resting place of Eve Hammersley, who lived locally and died in 1902. 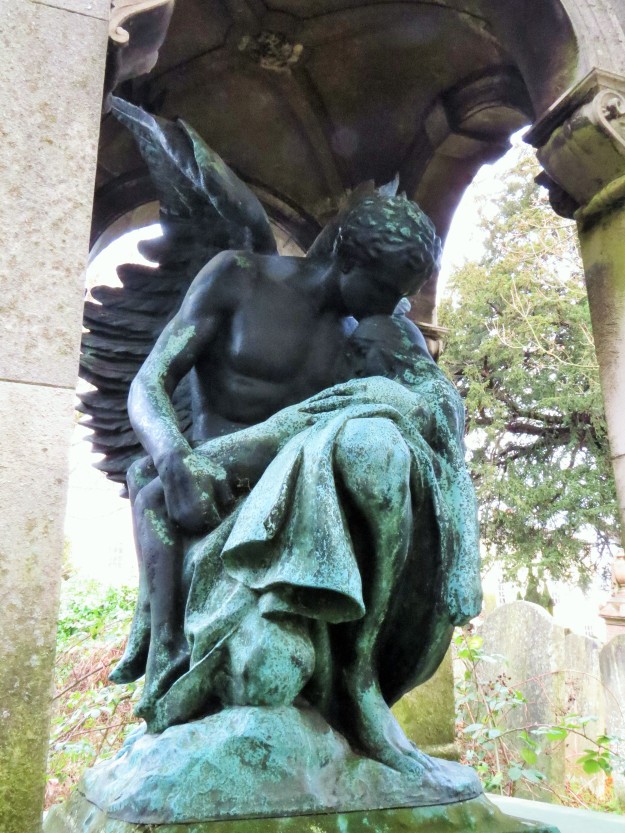 I found a gorse bush in full flower, and noticed for the first time how the petals at the base of the bloom have a little hole in them, like a jawbone.

And, in addition to the long-tailed tits (who aren’t really tits) there were blue tits and great tits, which are.

And so, as the rain started, I turned and headed for home. There are lots of interesting graves here: Hugh Gaitskill and Peter Cook are among the luminaries buried amidst the yew trees and the moss. And yet, as always, it’s the life that intrigues me and lifts my spirits in a cemetery, not the death. The call of birds and the bursting forth of new green life always reminds me that there are other cycles beside our day-to-day artificial bustle of Christmas and New Year, accounting year-ends and sales. For the birds, and for the plants, spring has already put a twinkle in their eye. If we stop and breathe and listen, it will do the same for all of us. 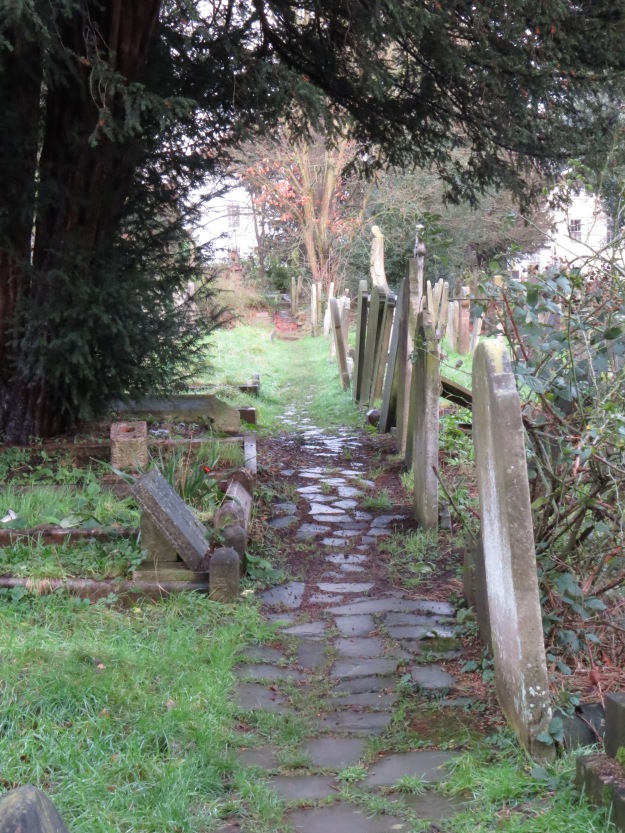 A pathway in the second churchyard