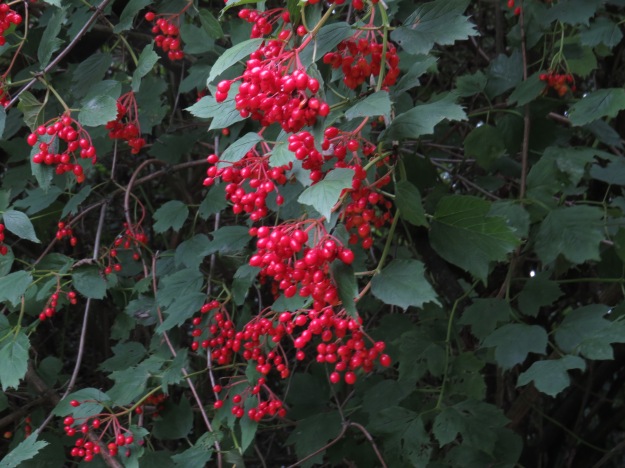 Dear Readers, there are some plants which are exquisite in every season. Take the guelder rose, for example. At this time of year, it is dripping in shiny red berries. As the year progresses, the leaves turn to shades of red and copper. 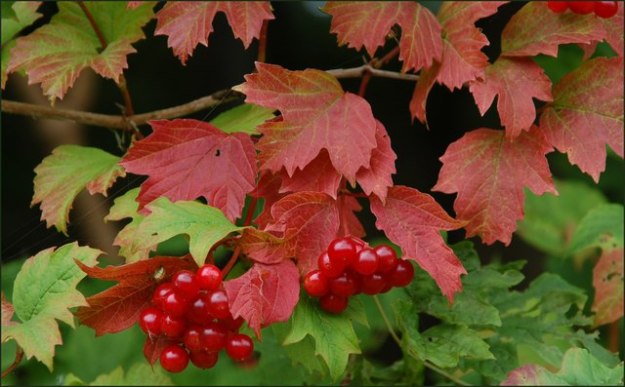 Guelder rose in autumn (Photo One)

And in the summer, the plant has flowers that resemble those of a lacecap hydrangea.

Guelder rose is actually not a rose at all, but is a member of the Moscatel family (Adoxaceae) which includes other viburnums and elders. It is native to a broad swathe of Europe, northern Africa and central Asia,and a related plant, Viburnum trilobum which is native to North America is thought by some botanists to be a subspecies of ‘our’ guelder rose.

The plant is one of the national flowers of Ukraine, where it is known as Kalyna, and the red berries are associated with fertility, health and, in Slavonic pagan beliefs, with the birth of the universe. ‘Oh, the red viburnum in the meadow’ was a marching song of the Ukrainian Insurgent Army. ‘Kalyna’ also referred to the hymen, and the bride’s bloodied nightshirt which was paraded in front of the guests on her wedding night as proof of her virginity was called a ‘kalyna’. It’s safe to say that guelder rose has a deeply symbolic value in Ukraine, becoming synonymous with the nation and with its people. The berries of the plant turn up everywhere, including on these rather fetching boots.

The name ‘guelder rose’, however, is thought to refer to the Dutch province of Gelderland, from where a popular cultivar of the plant, the snowball tree, originated.

Those red berries look delicious, and are indeed favourites of thrushes and the bullfinch. 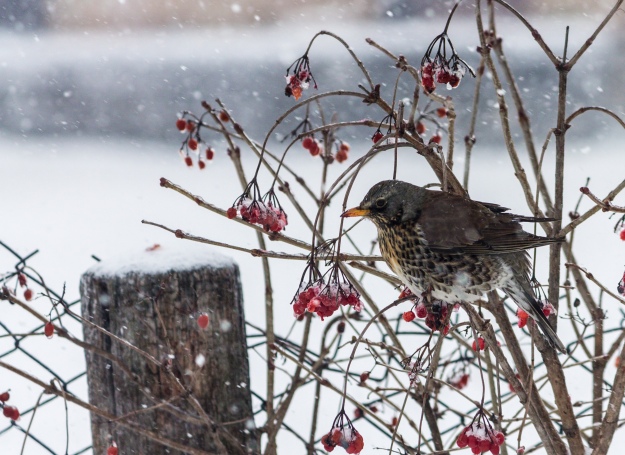 Humans can eat them too, in small quantities, although they are reputedly very acidic, and prone to causing diarrhoea. If used at all, they are generally turned into jelly to accompany cheese and cooked meats. In keeping with our Ukrainian theme, you can find a recipe for guelder rose jam here. The berries have also been turned into brandy and even into a cocktail.

One alternative name for guelder rose was ‘cramp bark’, and an infusion was used to treat all kinds of cramps and muscle spasms, including menstrual cramps and the symptoms of lockjaw (tetanus).

In Scandinavian mythology, guelder rose was called water elder, and the water spirit, known as the Nix, was said to wait under the plant and play enthralling music. When someone stopped to listen, they would be grabbed and pulled under the water unless they already had a sprig of the plant in their pocket.

And now to a poem. There is something in this one that puts me in mind of the train journey from London to Dorset, where my parents live, and of the interminable hours spent looking out of the window, lost in thought and yet suddenly brought back by horses running in the New Forest, the sea, a field of loosestrife and golden rod. And, of course, guelder rose.

England, or the continent I had in mind when I came here by Eireann Lorsung
for Caroline
Every bird is a sister of mine—can you believe
I never saw horses running
before I came to this island,
and nothing but their own good sense keeps them
from falling into the ocean?
At the edge of your country
along traintracks that run from Devon
to Cornwall, someone
set up a howl and it’s been going
longer than we remember,
or our mothers
remember, or their mothers.
Where else could a woman turn
into flowering rosebush? All
so peripheral, the crooked edges maps show—
the limit is sensate here
where I can never travel all night
and the next day—
what brings me is what bound you,
a piece of cloth in tatting thread and colors
I found here—loosestrife, sorrel, the guelder rose,
wood anemone—a tapestry
barring girlhood to one
field, long stripe of a neighbor’s plow turning
land just over the woven branches: earth
to earth.
The sandwich cart rattles by, you stack
cups on a tray. Meanwhile, unobtrusively, the air
diffuses particles, the sky is pinked.

This earth. This shining in the sea.

(first published online as a winning poem in the Dorothy Sargent Rosenberg Poetry Prize; also published in Her Book)

Éireann Lorsung is the author of Music For Landing Planes By (2007) and Her Book (August 2013), both from Milkweed. Other work appears or is forthcoming in Beloit Poetry Journal, Burnside Review, Colorado Review, DIAGRAM, Women’s Studies Quarterly, Two Serious Ladies, The Collagist, and Bluestem. She edits 111O and co-runs MIEL, a micropress

Photo One by © Copyright Albert Bridge and licensed for reuse under creativecommons.org/licenses/by-sa/2.0

Photo Two by © Copyright Walter Baxter and licensed for reuse under creativecommons.org/licenses/by-sa/2.0