Dear Readers, I was due to travel on the 3rd of September, and on the 2nd September I was still not sure if I was going. Mum was in hospital, and Dad had had the paramedics out again for a chest infection. But suddenly everything seemed to settle down. Did I dare take a whole week out from the drama at home? I certainly needed it. I wasn’t sleeping. I was crying at the slightest little thing. I had broken out in a hideous rash. In short, I was on the verge of not being able to cope at all.

And so I went to the other side of the planet, to Monterey Bay in California, for a Naturetrek tour. I arrived in a flurry, my head still full of carer timetables and hospital visiting times and contingency plans. And then, I was out on the water, looking towards a grey horizon on a sea that was so calm that it felt as if the boat was bobbing about on liquid metal. The sea fret clouded my glasses and frizzed my hair, and the fog numbed the sound of the engine.

It can look so lifeless, the sea. But Monterey Bay is a cetacean hotspot, where cold upwellings from deep undersea trenches provide a feast of krill for the largest animals on earth, and all the smaller ones too. From that cold water comes the hottest blood in the ocean.

At first the sightings were fleeting. A long grey back broke the water, accompanied by a fountain of steam some thirty feet high. A blue whale, accompanied by her calf, was crossing the Monterey Bay superhighway. From our view in the boat she looked big, but the photograph below shows her true scale – blue whales grow to some 90 feet long here, though the longest ever recorded was 108 feet long.

Blue whales are remarkable animals, but because of their immense size they don’t go in for the acrobatics of their smaller relatives, the humpbacks, who measure a mere 50 feet long. There is a population of some 3000 humpbacks in the Monterey Bay area, and watching them made me wonder at their strength, their complexity and their sheer otherworldliness. Even after spending some twenty hours in their company in the course of a week I am still not quite sure if they were a dream, or if I actually saw them. Fortunately, there are photos.

It’s not uncommon to see a humpback ‘breaching’, or throwing itself out of the water. Scientists still don’t know why they expend the amount of energy required to heave that 30 ton body out of the water, but presumably it’s important. There has been speculation that it’s for communication (the noise of the splash carries for miles, and it’s been noted that when one whale breaches, another many miles away may do the same thing when the sound wave hits). Is it for exercise? Young whales seem to do more breaching, but maybe that’s just because they can. Or is it for sheer exuberance?

Incidentally, the angle of the photo below makes the whale look much closer to the boat than s/he actually was. The company that we used for the trips, Discovery Whale Watch  was very respectful of the rules around whalewatching in the area: whales were always given plenty of room, approached from the side rather than from behind, and the engine was cut when we were around the animals. In all the cases that I observed the whales carried on doing exactly what they were doing before we arrived. 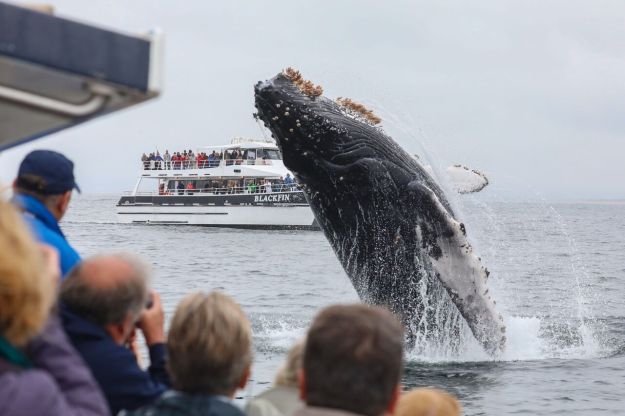 We also saw the extraordinary sight of a mother and calf breaching at the same time – was the mother teaching the youngster how to do it?

Generally, when humpbacks breach they land on the back of their heads, which are bony, rather than doing a belly flop. Look at the length of those pectoral fins! When people first found the bones of humpback whales in the Americas, they took one look at those huge ‘hands’ and thought they must be looking at the skeletons of giant angels. 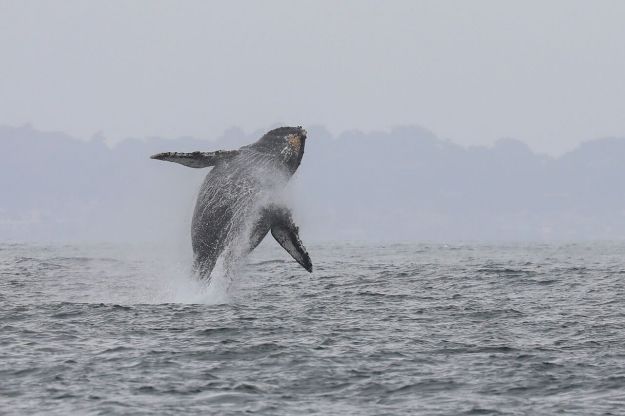 Humpbacks often feed communally on the huge shoals of anchovy that gather in the Bay to feed on the krill. We watched them blowing a circle of bubbles to make sure that the fish were pushed into a tight ball, before opening their mouths en masse and swallowing swimming pool-sized gulps of fishy water. I’ve watched scenes like this on Blue Planet, but never dreamed that I’d have a chance to see it in real life.

It’s hard to capture the excitement of seeing so many whales together. It felt such a privilege, as animal encounters always do to me. It is so easy to for me to become embroiled in my particular challenges and dramas, but seeing something like this wipes the mind clean until all that is left is a sense of wonder.

As the whales fed they were joined by sealions and pelicans, shearwaters and terns, until the whole sea was boiling. The biologist onboard pointed out that if the sealions started jumping, the whales were often going to surface right beneath them, and so it proved. Sometimes the whales seemed to get irritated with all the other creatures and made a trumpeting sound that reminded me of a baby elephant. It must be crowded under the surface with  all those other animals trying to muscle in.

And how quickly the whales gobbled up the anchovies! Sometimes, all that remained were a few sad silvery scales bobbing  beneath the boat. The feeding frenzy also gave us humans the dubious pleasure of smelling ‘whale breath’, which resembles a combination of flatulence and halitosis. I guess that if you live on a diet of krill you must need powerful stomach bacteria to deal with it all.

And as if this wasn’t enough, on several occasions we were joined by a superpod of several hundred Common Dolphin. They love to ride the bows of the boat, and the hashtag bites on their backs are a token of how determined each one is to claim the front spot. 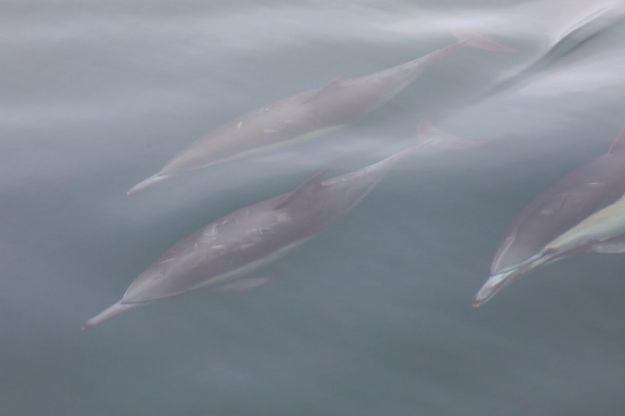 There are lots of explanations for why dolphins jump, too. Is it a dominance display, or a way of communicating? Probably both, but to me it also looks like a whole lot of fun. 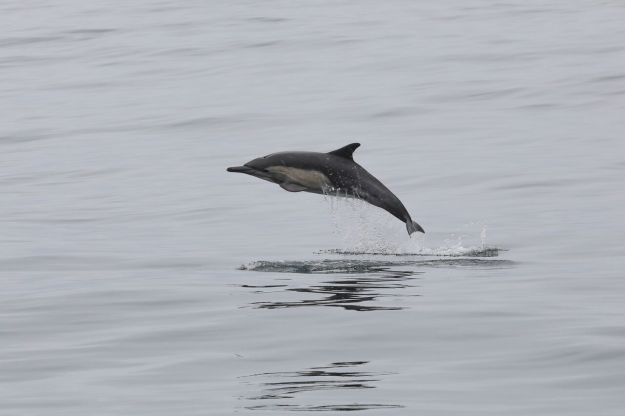 And when I got back to the land (which seemed to heave slightly under my feet) and gazed out to sea, I was left with a sense of profound mystery. In some ways whales are so similar to us (they are mammals after all), but when I think about their lives underwater, their songs, their epic migrations and their bonds with one another that might be maintained over many years and over hundreds of miles, I am astounded. To think that we share the planet with such creatures fills me with awe, and gratitude, and humility.

The majority of the photographs this week were taken by one of our guides on the trip, Peter Dunn. It was wonderful to be able to just watch and appreciate these remarkable animals without having to worry about whether I was getting the perfect shot. Sometimes, the camera comes between me and what I’m looking at, but this time I could relax into the experience. Thanks, Peter!

The photo of the blue whale with our boat was taken by Slater Moore, using a drone. In case you are worried about this causing disturbance to the wildlife, I should point out that it was used for less than ten minutes during a four hour cruise, and at no point was it flown close to birds or smaller sea mammals who might have been disturbed by the noise. Have a look at Slater’s website for some other remarkable photographs.