Dear Readers, I have searched long and hard for this plant in East Finchley, only to find it in abundance when I did my Greenwich Peninsula Ecology Park walk a few weeks ago. It is our only native clematis, and has a variety of vernacular names. The sixteenth-century writer and herbalist John Gerard christened it ‘traveller’s-joy’ :

‘These plants have no use in physick as yet found out, but are esteemed only for pleasure, by reason of the  goodly shadow which they make with their thick bushing and climbing, as also for the beauty of the flowers, and the pleasant scent or savour of the same’.

The fluffy ‘hair-do’ seedheads are indeed a delight, and the flowers, though small, can be extremely abundant. I’ve never savoured the scent, but they are said to smell faintly of almond. 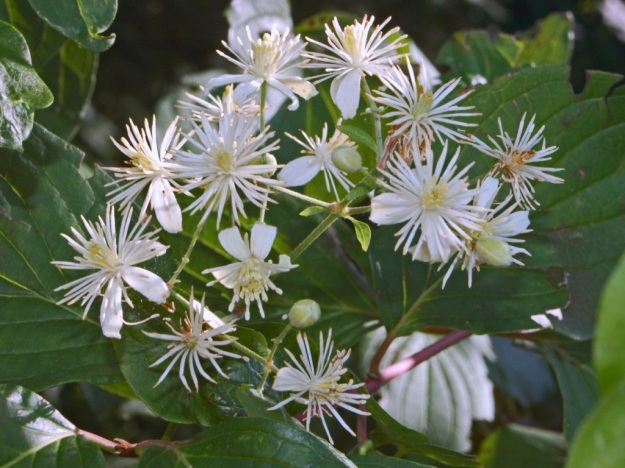 The plant is a member of the buttercup family (Ranunculaceae) and is found in the UK roughly south of a line from the Mersey to the Humber. It has been widely planted in other places, however, and is considered invasive in countries such as New Zealand. Left to its own devices, it can form a thick canopy that shades out other plants. However, in the UK it is the sole foodplant of several species of moths, including the small emerald, small waved umber and Haworth’s pug, who help to keep it under control.

The dry winter stems of old man’s beard have been used as cigarette substitutes, giving old names such as ‘smokewood’ and ‘boy’s bacca’.  In Slovenia the stems were was used to tie sheaves of grain together, because it was believed that mice wouldn’t gnaw on them. The stems have also been used to make baskets and rope since the Stone Age.

In Italy, the boiled buds are used in omelettes called ‘Fritatta di vitalbini’ and are considered a delicacy.

In spite of Gerard’s belief that the plant was not used for ‘physick’, a juice made from old man’s beard was used in the nostrils to cure migraine. I find the warning that ‘it can also destroy the mucous membranes’ a little alarming, however, and the Poison Garden website describes it as follows:

‘Ingestion leads to severe abdominal pain, gastrointestinal irritation and has caused death in cattle though it is not usually eaten because it has an acrid taste and contact can cause skin irritation‘.

In short, old man’s beard is a plant to be used well-boiled, or not at all.

‘ medieval beggars and mendicant friars would enlist vitalba’s venomous qualities to bring about sores on the skin, to achieve a more pitiable appearance before those potentially charitable souls whom they passed on the road‘.

In French, the plant is known as ‘herbe aux geaux‘, or rascal’s herb, so presumably this effect was well known across the plant’s range. 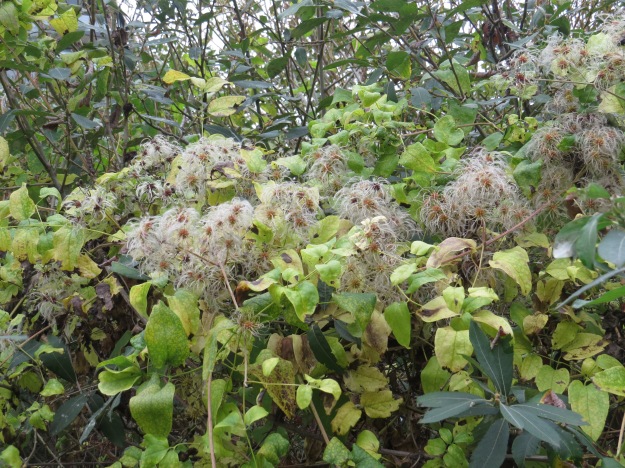 From a folkloric point of view, old man’s beard bears a double meaning, as is so often the way. It was said by countryfolk to do the devil’s work, because it smothered other plants and killed them. It is also associated with the Virgin Mary and with God because of its white flowers, and another vernacular name for the plant is ‘Virgin’s bower’. I can well imagine resting on a bed of these fluffy white seedheads, or reclining among the sweet-scented flowers.

I have been quite remiss on the poetry front for this past few weeks, but here’s a piece by Edward Thomas to make up for it. He really is one of the best of England’s poets with regard to his appreciation of the countryside. ‘A mouthful of earth to remedy all’, indeed.

By Edward Thomas
The dim sea glints chill. The white sun is shy,
And the skeleton weeds and the never-dry,
Rough, long grasses keep white with frost
At the hilltop by the finger-post;
The smoke of the traveller’s-joy is puffed
Over hawthorn berry and hazel tuft.
I read the sign. Which way shall I go?
A voice says: You would not have doubted so
At twenty. Another voice gentle with scorn
Says: At twenty you wished you had never been born.
One hazel lost a leaf of gold
From a tuft at the tip, when the first voice told
The other he wished to know what ’twould be
To be sixty by this same post. “You shall see,”
He laughed—and I had to join his laughter—
“You shall see; but either before or after,
Whatever happens, it must befall,
A mouthful of earth to remedy all
Regrets and wishes shall freely be given;
And if there be a flaw in that heaven
’Twill be freedom to wish, and your wish may be
To be here or anywhere talking to me,
No matter what the weather, on earth,
At any age between death and birth,
To see what day or night can be,
The sun and the frost, the land and the sea,
Summer, Autumn, Winter, Spring,—
With a poor man of any sort, down to a king,
Standing upright out in the air
Wondering where he shall journey, O where?”

Photo Two by By ©entomartIn case of publication or commercial use, Entomart wishes then to be warned (http://www.entomart.be/contact.html), but this without obligation. Thank you., Attribution, https://commons.wikimedia.org/w/index.php?curid=293985

Photo Three by By ©entomartIn case of publication or commercial use, Entomart wishes then to be warned (http://www.entomart.be/contact.html), but this without obligation. Thank you., Attribution, https://commons.wikimedia.org/w/index.php?curid=823634