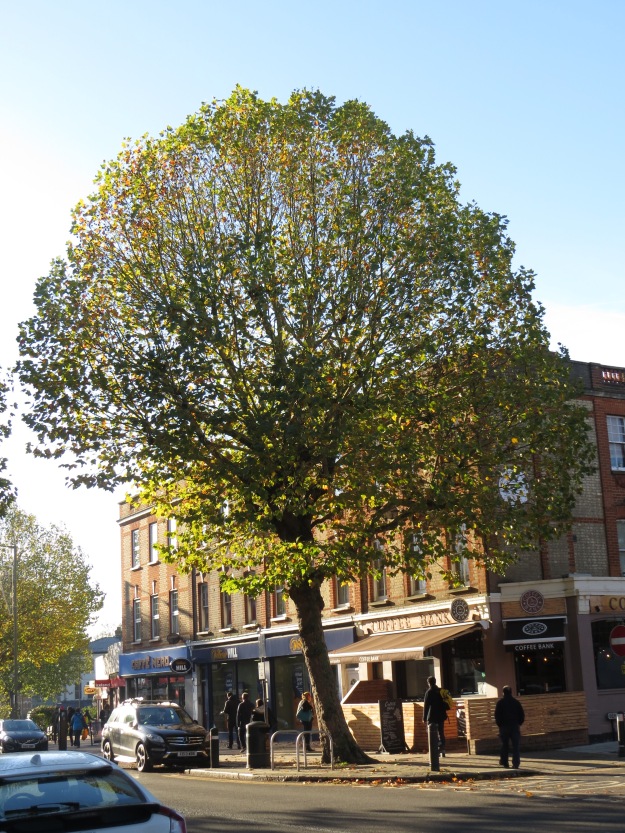 Dear Readers, it’s some indication of how the summer has passed that I have not created a post about East Finchley since June. But this morning was so beautiful that I had to go out with the camera for a stroll around the County Roads. I have been so stressed that I have become completely unmoored, and the cure is to walk, slowly, to pay attention, to breathe and to notice. What better place to start than with the plane trees on the High Street, that seem to be holding the sun in their branches? They are the last species around here to come into leaf, and the last to lose those leaves.

The Bald-Faced Stag gazes towards Cherry Tree Wood, as usual.

There are a lot of tropical Fatsia plants in some of the south-facing front gardens on Lincoln Road. The buds look like little green artichokes, bursting into waxy white flowers. 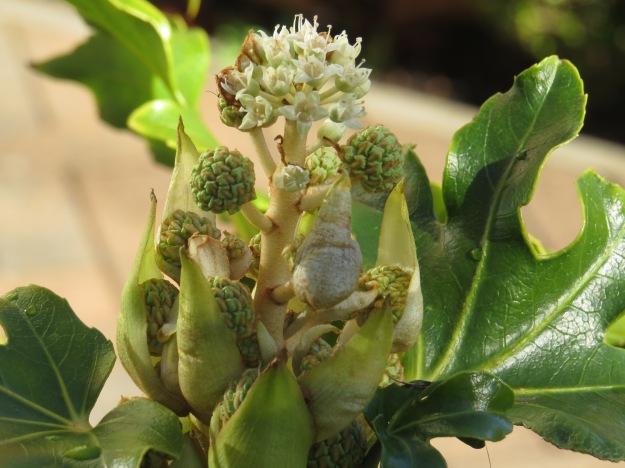 There are lots of members of the daisy family still coming into flower, loosening those tight-fisted buds one petal at a time.

Michaelmas daisies are everywhere, I love the way that the stamens go from yellow to purple as the flower ages.

And the autumn berries and hips and fruit are set off by the blue sky. 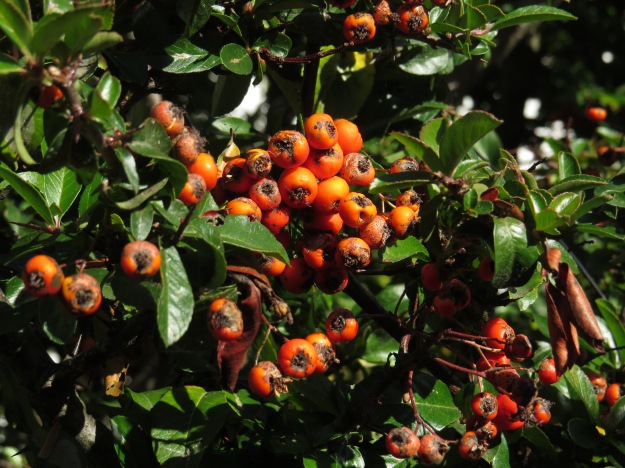 Each burst of colour feels like a small electric shock. I ask myself where the summer went? Since July every waking moment has been spent organising, planning and worrying about my parents. Now that they are in the nursing home I feel redundant, without purpose. This will pass, I know, but at the moment I feel as if all the grief that has been stored up over the warmer months is exposed by the extravagance of autumn. It all feels just a little too much, beautiful as it is.

I spent a few days with Mum and Dad in the nursing home last week. I had a chance to have a good talk with Mum and to take her through what had happened, step by step. She seemed to understand, finally, that we were unable to look after her at home anymore, and that we wanted to carry out her wishes to be with Dad, and to be close to the friends and neighbours  that she loves. She hasn’t mentioned going home since, though I am not optimistic enough to assume that this will be the end of the conversation. But things look better than they did last week, and that is a bonus.

And now, I have to work out what I want to do when I grow up. As I am nearly sixty, I’d better get a move on. And in the meantime, I am walking the streets with my camera, making friends with the local cats. 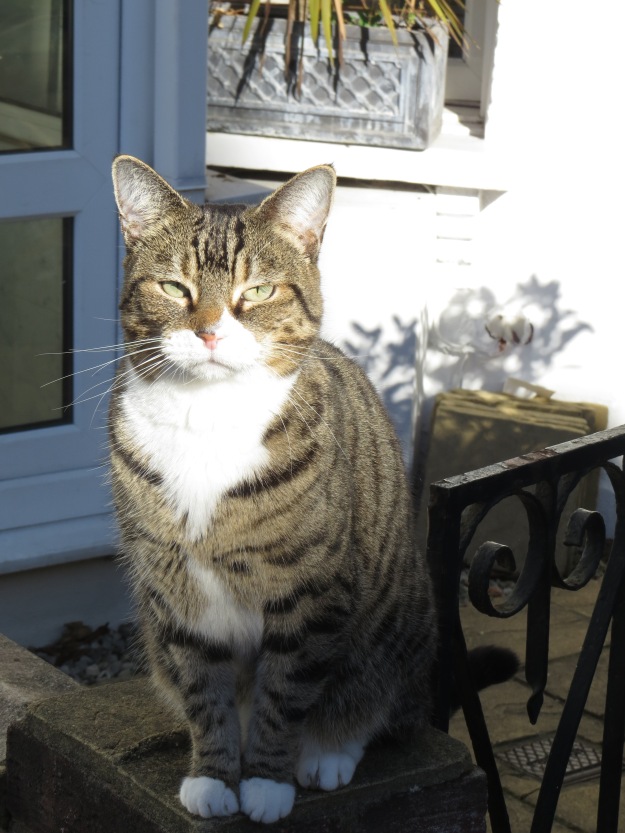 There is one garden that I really love. It is a tiny space but absolutely full of nicotiana, borage, and other pollinator-friendly plants. There are a few honeybees even on this chilly day – one of the benefits of a south-facing plot is that it warms up the insects and helps the nectar flow. As I watch, I hear a low-pitched humming, and a queen bumblebee as big as the first joint on my thumb appears. Maybe the warmth of the day has roused her from her hibernation, and she needs a snack. The borage shudders and bows under her weight. 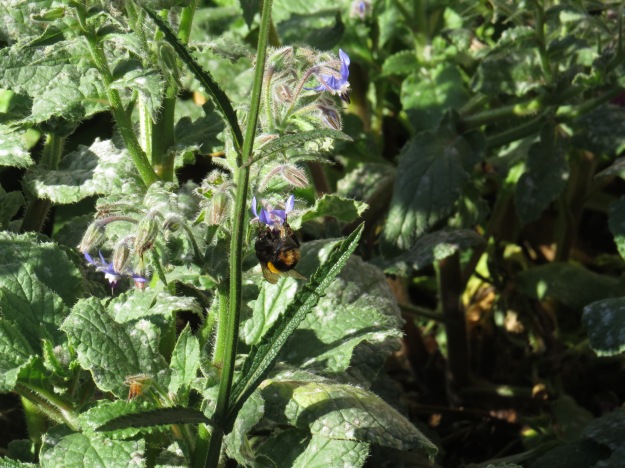 I float along to the High Street again. For a whole hour I haven’t been worrying about whether the nursing home are taking dad’s slight chest infection seriously, or what they will do about the fact that he’s now more or less nocturnal and keeps waking mum up. I realise that though I still have a role to play, the day to day care is not something that I need to meddle in. The home is happy for me to phone whenever I want, but I do think that after being so involved for such a long time, I need to step back from the small stuff. The trouble is, it’s a reflex, and it gave my life purpose.

What do I do now, with my one wild and precious life?

Well, one thing seems to be that I take photos of bollards that have been knocked over. The one on Leicester Road is no sooner concreted into verticality than it’s prone again. This cycle must have been repeated a dozen times since we moved to East Finchley in 2010. And there’s a bollard on the High Street that is similarly afflicted. I could extract some cheesy metaphor about persistence and resilience, but actually it seems a bit Sisyphean, a never-ending task that seems to have no more meaning than a grudge match between bad drivers and some long-suffering council workers.

On Bedford Road there is a rather beautiful tree. It is poised like a heron about to take off, one branch flung back and arching over a garage, the other leaning over the pavement and almost kissing the tops of the cars. What a deeply inconvenient being it is, no doubt blocking out the sun from the front windows and depositing leaves in great russet piles. And yet, it is obviously loved, and encouraged, and valued. There is room on these streets for the strange, the unusual, the awkward. I feel at home here. One day it will be my turn, too, to leave. I hope that I will have planned ahead so that the transition will feel like one that was a choice, rather than imposed on me. And in the meantime I hope to make the most of the harvest, and of the glory that it brings.

12 thoughts on “Coming Home at Last”